Maps improve after Moberly’s survey of the Shuswap

Home » Maps improve after Moberly’s survey of the Shuswap 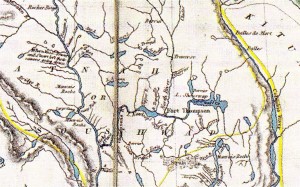 The 1841 map of the Oregon Territory published by exploration leader Charles Wilkes was used by the U.S. for its claim of the Puget Sound. The prolific British commercial mapmaker James Wyld later published it along with many other B.C. maps. We will never know where the odd design of “Shouswap Lake” in this map came from, as it appears with minor arms and no less than 11 islands! And this creative interpretation continued in more maps, including one produced by the Royal Engineers in 1859. Yet in Wyld’s 1858 gold rush map, only one island remains and the lake is shaped like a salmon, with “Indian Diggings” on the north side and “gold” on the south side. 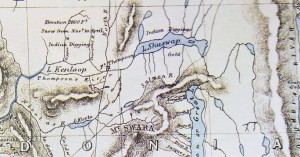 1858 Map of Gold Regions by James Wyld, courtesy of Derek Hayes and U. S. National Archives

It was not until 1865 that a fairly accurate depiction of Shuswap Lake appeared in famed surveyor Walter Moberly’s journal. This hand drawn map shows the location of Eagle Pass, which he discovered, as well as the location of two other Indian trails to the Columbia River, one from above Sugar Lake and the other from where Cherryville is today. Moberly’s map also shows a trail on the north side of the Little Shuswap Lake. When Moberly travelled around the lake, he may not have made it to Salmon Arm, as the shape of this part of the lake looks like the corner of a triangle and his map does not include Mabel Lake. 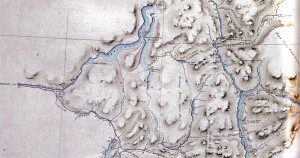 Walter Moberly’s map from his 1865 expedition, courtesy of Derek Hayes and Land Title and survey Authority

Alexander Caulfield Anderson spent 22 years working for the Hudson’s Bay Company beginning in 1832 and during these years he kept meticulous records and drew many maps. After he retired from the fur trade at just 40 years old, he moved to Victoria where he worked at a number of jobs and found time to write. In 1867, Anderson drew a large map of a portion of the Colony that included the Shuswap. It is possible that he had access to Moberly’s journal, as his depiction of the “Great Shushwap Lake” matches Moberly’s drawing. 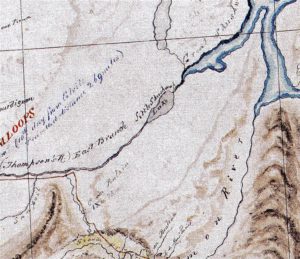 The first official map of British Columbia, drawn by ex-Royal Engineer, James Launders, was published in 1871. It was produced under the supervision of Chief Commissioner of Lands and Works, Joseph Trutch. Once again, it is likely that Moberly’s sketch of Shuswap Lake was used, as it too incorrectly depicts the Salmon Arm. As well, both Mabel and Sugar Lakes are missing and Adams Lake appears smaller. Interestingly, Shuswap is finally spelled correctly and the trail along the north side of Little Shuswap Lake carries on to Adams Lake where it heads west through the Louis Creek Valley to the North Thompson River. 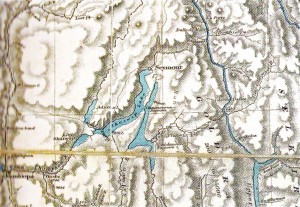 Once the decision was made to construct the railway, new maps were created based on more accurate survey work. In 1884, a map was published prepared by surveyor Edward Mohun that finally accurately depicted the shape of “Shushwap Lake” and included both Mabel and Sugar Lakes. The map also shows the extent of the railway construction at that time, with the uncompleted section of track between Savonna and the border with Alberta. Interestingly, one of the only features shown is “Camels Hump” mountain near Lumby, which first appeared on Moberly’s 1865 map. 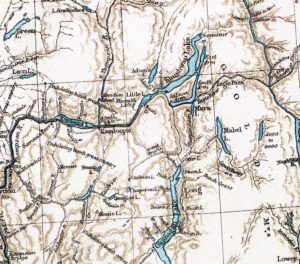 The accuracy of maps improved substantially once the CPR was built and settlers began to move into the interior of the province. The next job for surveyors was to define the townships and sections to allow for pre-emption of crown land for settlement. In 1914 a colourful map of land status in the Railway Belt in the Kamloops, Shuswap and North Okanagan regions was published with pre-empted land shown in yellow. The maps also show the timber berths, which in places restricted settlement. Most of the private land that exists today is shown on this map, except around White Lake. 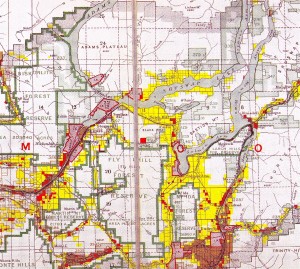 The fascinating 1915 Surveyor General’s map, which uses shading to show hills and mountains, provides a look at the Shuswap before most roads and bridges were built and when trails were still in use. There were only two wagon roads into Salmon Arm, one along the Salmon River and one from near Grindrod.  And some routes that are only gravel roads today, were main thoroughfares, such as the Skimiken Road and the road from Falkland through Paxton Valley to Pritchard. One mystery is what happened to the well-marked “Shoot-non-hoot-looh Indian Village” located just east of the mouth of the Shuswap River on Mara Lake. In 1915, the road heading north from Grindrod ended there. 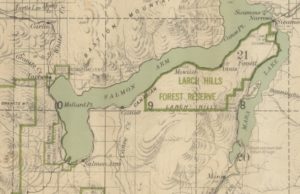 The 1915 map is not in Hayes’s historical atlas, but I once owned the actual map and donated it to the Salmon Arm Museum, after it had been scanned at city hall. A copy of the scan and the 1814 David Thompson Map can be downloaded for free from shuswapwatershed.ca (look under resources, followed by history).