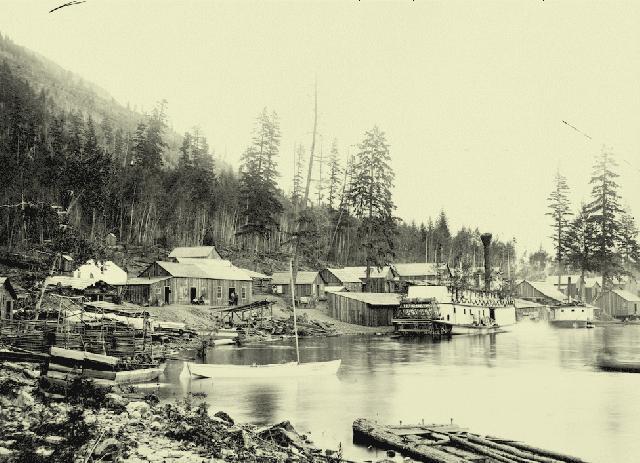 Eagle Pass Landing in 1886, Maynard photo courtesy of the BC Archives and the Kamloops Art Gallery

While the story of the Shuswap’s first town of Seymour City (Ogdenville) that was built and mostly abandoned in just one year, 1866, is fairly well known; fewer people are aware that in that same year the town Eagle Pass Landing was also built at the mouth of the Eagle River. The story begins in July 1865 when Governor Seymour was concerned about the need for a trail from Ogdenville to the Big Bend gold fields on the Columbia River.

He selected Walter Moberly, who was in charge of the Lands and Works Department for the colony, to survey and blaze a trail and survey the country east of Shuswap Lake to determine the best location for a wagon road. Moberly, along with four surveyors, Perry, Green Turnbull and Cowan and some Indian guides and packers left the Kamloops fort in two bateaux to get to the Hudson’s Bay Company outpost at the head of Seymour Arm, where he left his assistants to survey two possible routes, while he went with two Indians to explore the lake in a skiff.

At the northeast of the Shuswap Arm of the lake they ventured up the river as far as possible by boat and then headed upstream on foot where they climbed up a mountain to get a view of the area. From on top of the mountain, Moberly observed eagles flying into what appeared to be a unbroken wall of mountains before disappearing, and thus he determined that there must be a pass through the range.

He then returned to Ogdenville to join his crew and hike to the Big Bend along the shortest trail they surveyed, where they built a dugout canoe and headed down the Columbia River. From near where Revelstoke is today, they journeyed through the pass the eagles had used to return to Shuswap Lake and somewhere near where Craigellachie is today he blazed a small cedar tree and wrote the words “This is the pass for the Overland Railway.”

Moberly used Eagle for the name of the river, the pass, and the mountain. When the miners learned about the better route to the Columbia from near the mouth of the Eagle River, many of them headed there and once again another boomtown was built in a few months. Eagle Pass Landing was a ramshackle community with crude tents, shacks, log cabins and a few board saloons and gambling dens with false fronts, along with wooden sidewalks. And there was a depot for shipping provisions, a general store and a blacksmith’s shop. But this first town was short-lived, as when the gold ran out the miners left and fire consumed many of the structures.

As the trail to the Columbia became a tote road, the town continued to barely exist until it was determined in early 1882 that the railway would go through Eagle Pass instead of the Yellowhead route. When the survey and land clearing crews began to arrive, the town boomed once again. There were two or three hotels, stores, dance halls, livery barns, and even a police barracks and jail. It was a common sight to see upwards of 100 cattle disembarking from one of the lake steamers and driven up the tote road to Revelstoke and the construction camps along the way.

Morley Roberts worked for the CPR building the railway and wrote about his experiences in a book about his adventures in British Columbia. He described Eagle Pass Landing as a rough and tumble town filled with intoxicated men gambling and fighting. But he also enjoyed some of the same summer pastimes of today, swimming, and touring around the lake in an old Indian dugout canoe.

The first person to pre-empt land in Sicamous was Civil War veteran George Murdock who, upon realizing the strategic importance of this area, managed to claim 332 acres surrounding the Eagle Pass Landing. From 1882 until 1892, Murdock and his partner, Hill, had a hotel, store and whiskey saloon and their farm produce was sold to the railway. The CPR originally planned to run the tracks through Eagle Pass, but since the lake was too deep for a bridge and Murdock had title to the land, it chose to bridge the channel instead and build the tracks on the south side of the Eagle River. 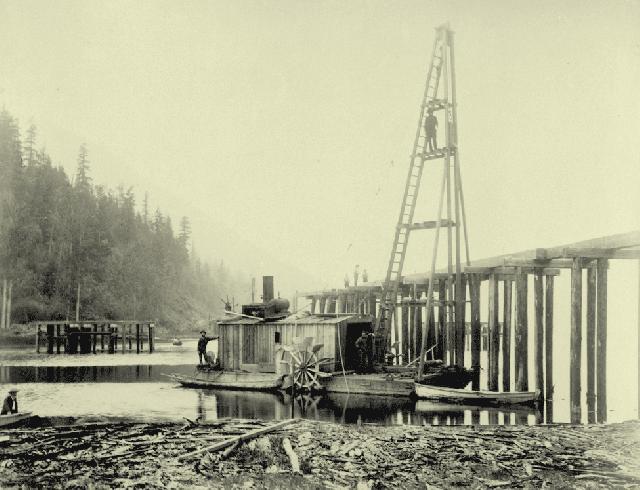 Pile driver in the Sicamous channel, 1885, Maynard photo courtesy of the BC Archives and the Kamloops Art Gallery

When the railway was completed in 1885, Eagle Pass Landing slowly withered away as the town of Sicamous grew alongside the railway tracks. Eagle Pass Landing, now known as Old Town Bay, became the site for a sawmill and years later the bay was used for booms of logs.  After the vacant property was sold in 2005 to Twin Anchors, which plans to move their houseboat operation to the bay, riparian fish habitat was cleared for development resulting in a conviction and a fine. 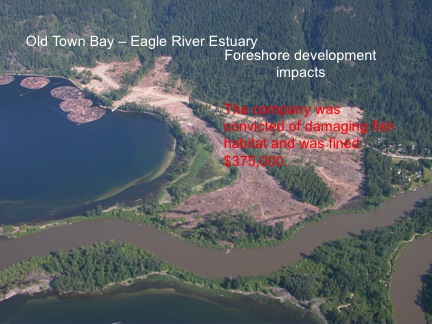 Eagle Pass Landing likely resembled a cowboy town out of a Western movie, with saloons, gambling and some wild behavior. All that was missing were the horses, as most of the workers who lived there arrived by steamboat. There were horses and wagons however, but for many of the workers the mode of travel once they were there was by foot.

Here is a description of the town from the book, “Sicamous, Land of Shimmering Sunset Waters,” by Annie Dorothy Abercrombie:

Eagle City Only a Memory It was a rough, tough camp in the days of early con-
struction of the C.P.R. through the Rockies. It was short- lived but merry. Known as the camp where the one street was paved with playing cards was literally true. There were so many poker games in progress there, that in order to prevent — or at least minimize — undue advantage to the sharpers, who frequented the camp, cards were discarded after each game. They were just tossed out of the window, and it being no person’s business to clean the street, they lay there until the dirt road was actually covered with hearts, spades, diamonds and clubs.
Courtesy of Dr. H. L. (Geraldine) Coursier

The area where Eagle Pass Landing stood is now called Old Town Bay. It will one day become the new marina site for Twin Anchors Houseboats. The proposed housing development has been stalled due to the economic downturn and may never be built.