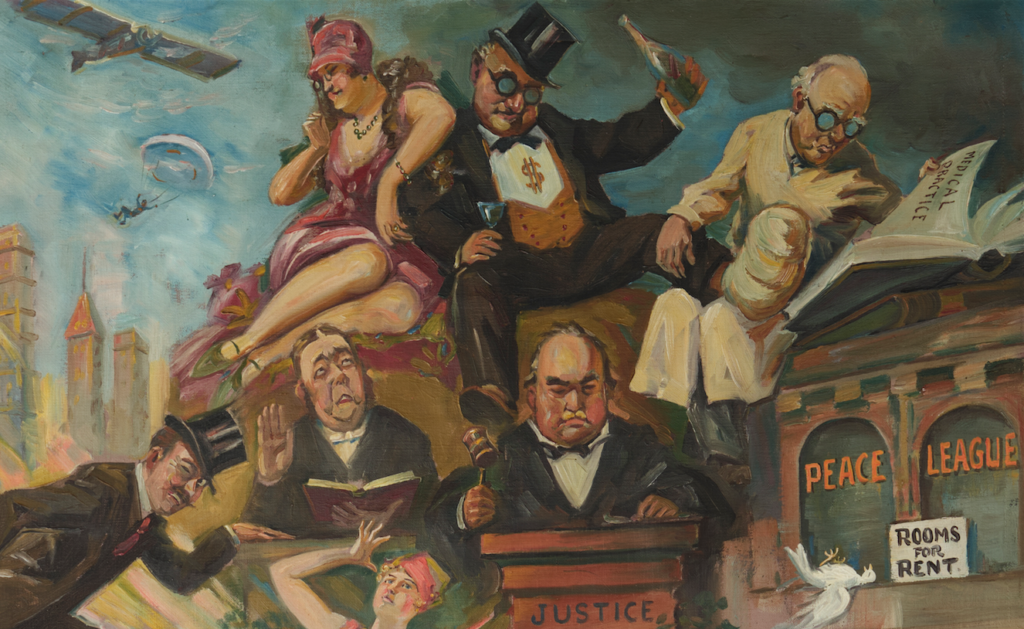 Searches for many topics related to the Shuswap often end up at my blog site, shuswappassion.ca where there are hundreds of articles. Recently, Lawrence McWilliams from Whidbey Island, Washington was looking for more information about the artist, Jerome Howard Smith, who had signed the painting found hidden in a ceiling by his parents in 1967. After reading my blog about the famous artist who lived in Chase over 100 years ago, he contacted me with hope of learning more. 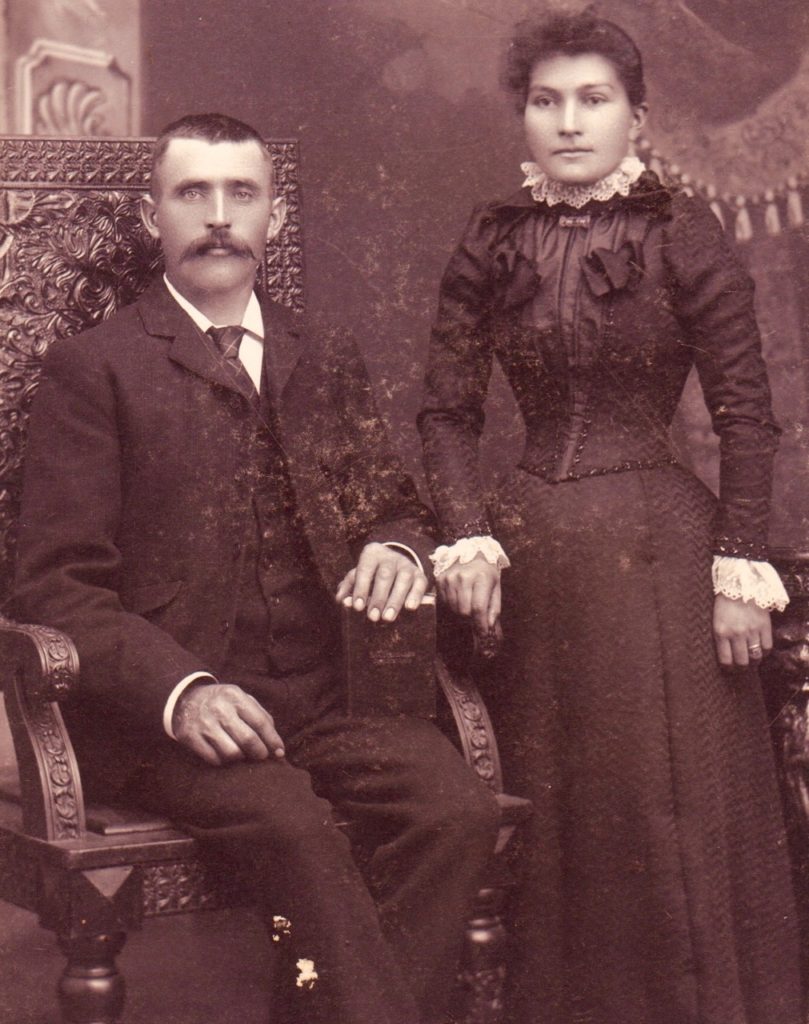 Howard and Amy Smith, photo courtesy of the Chase and District Museum and Archives

Smith had quite the career including art study in Chicago and Paris, working as a comic illustrator in New York, working on Western ranches and in mines and painting alongside the famed cowboy painter, Charles Russell, before he settled on a ranch in Chase. When the sawmill closed in 1925, he moved to Vancouver where he continued to paint Western scenes. 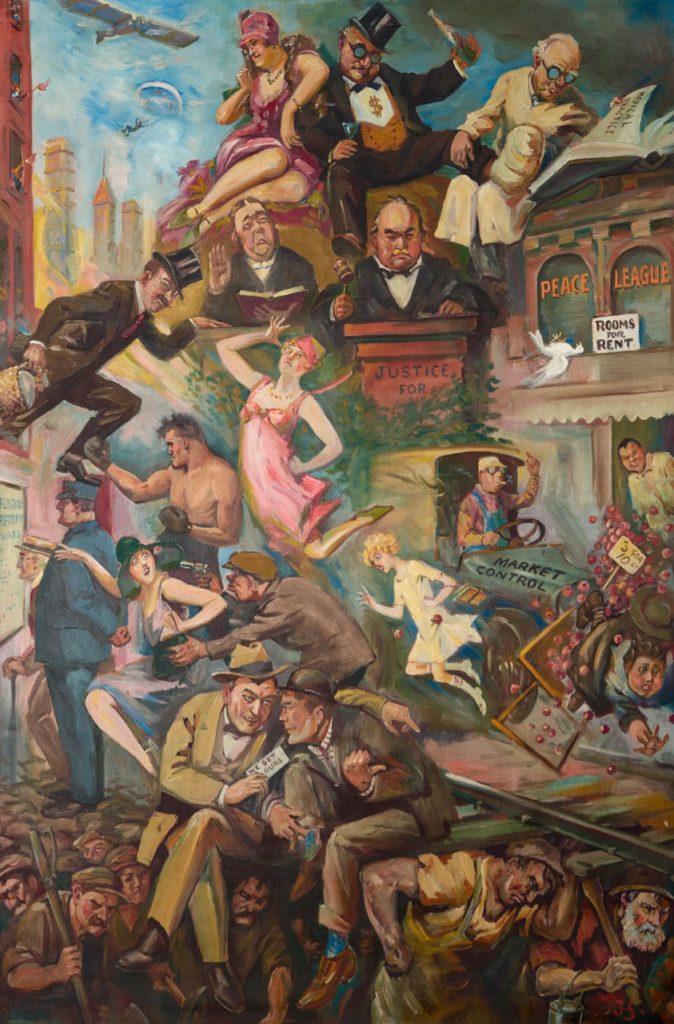 When McWilliams emailed me an image of the painting his father had found rolled up between the rafters, I was flabbergasted. Instead of one of Smith’s typical paintings of horses and cowboys, this was a remarkable, satirical painting, in the style of a Diego Rivera mural, of life in New York in the Roaring Twenties that could be titled “Before the Crash.” 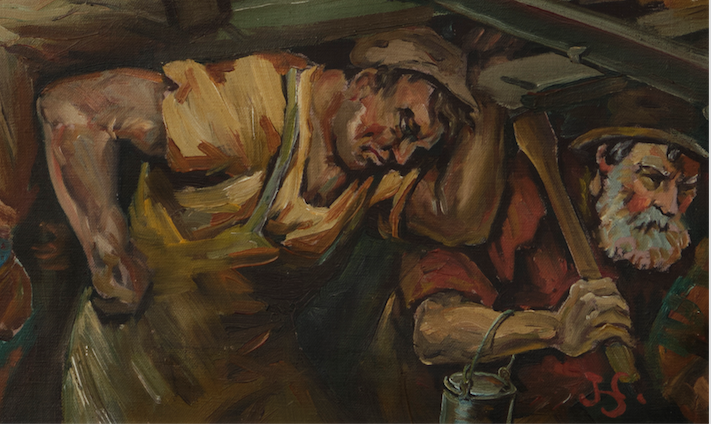 Filled with a collection of scenes portraying a diversity of characters, from the wealthy tycoon suffering from gout and his extravagant mistress at the top to the struggling workers holding it all up at the bottom, the painting portrays a world beset by inequality and unfairness. Nearly every scene tells a story that conveys an anti-capitalism message, including the type of glasses worn by the near blind on the tycoon symbolizing his blindness to the struggling poor.

The time period is likely 1929 as in the skyline is the likely newly constructed art deco Chrysler Building, which was completed in May 1930. 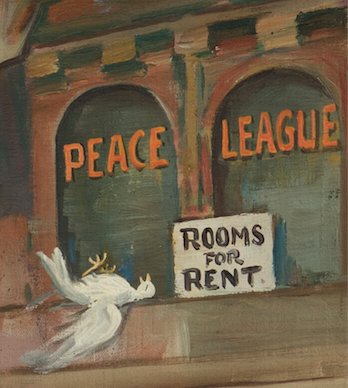 The Peace League has a dead white pigeon, the symbol of peace, on the window ledge and rooms for rent, which likely refers to the U.S. government’s refusal to join the League of Nations. 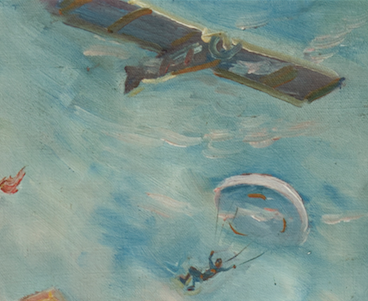 Charles Lindbergh is pictured parachuting from his plane, which is one of the activities he was known for prior to his trans-Atlantic flight. A depiction of life during the depression would likely have been much more bleak. 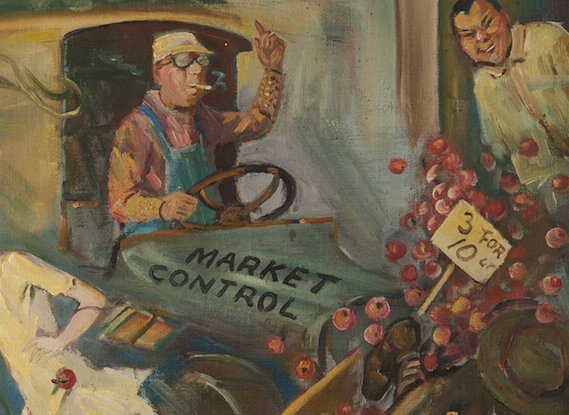 A farmer is shown driving a truck titled “Market Control” into a fruit stand, knocking over the apples and the merchant. 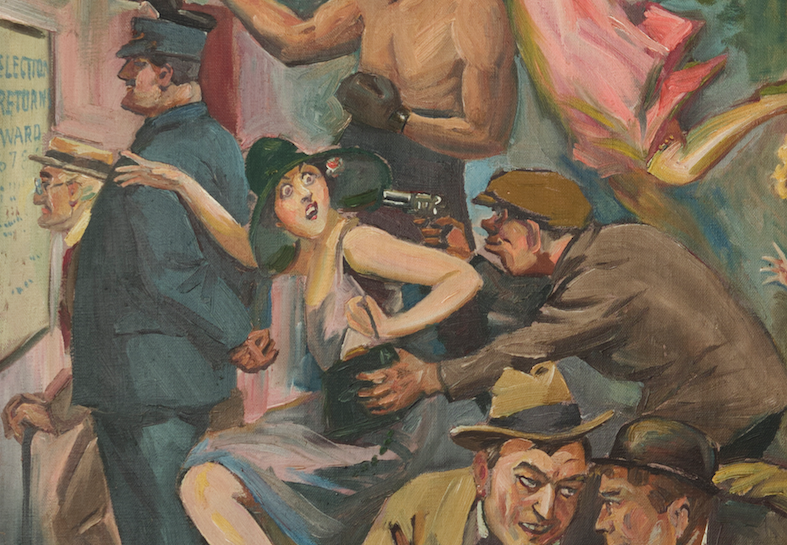 With his back turned as a thief robs a lady’s purse, a policeman is shown reading election results. The two men in suits looking devious who are posed with a card that reads, “we get ours,” could be union bosses. 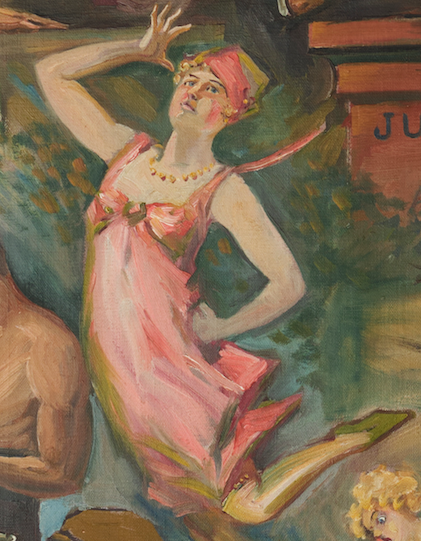 A flapper girl thumbing her nose with her knee exposed represents the new freedoms women achieved in that era. There are no smiles on the faces of the hard-working men at the bottom who are holding the tools of their trades as they bear the weight of everyone on top of them.

The painting is a mystery in more ways than one. Why did Smith decide to paint it, when most of his work during his later years focused on Western themes? Was it commissioned or does it reveal Smith’s own socialistic viewpoint? Was it ever displayed and why was it hidden?

One clue to the enigma is that Smith’s primary art dealer was Fred Darvill, who helped support him during the depression with commissions. The Darvill gallery, now located online from Arizona, still sells original prints of Smith’s paintings. Darvill spent summers on Orcas Island in the 1930s, which is near Whidbey Island where the painting was found.

The “Before the Crash” painting can now serve as a teaching tool for studying the era and it serves as a reminder that the more things change, the more that life stays the same. If anything, economic inequality continues to get worse, especially in the United States, where the wealthy few dominate nearly everything. Thus, given the ongoing pandemic, could a big economic crash come next during this millennium’s Roaring Twenties? 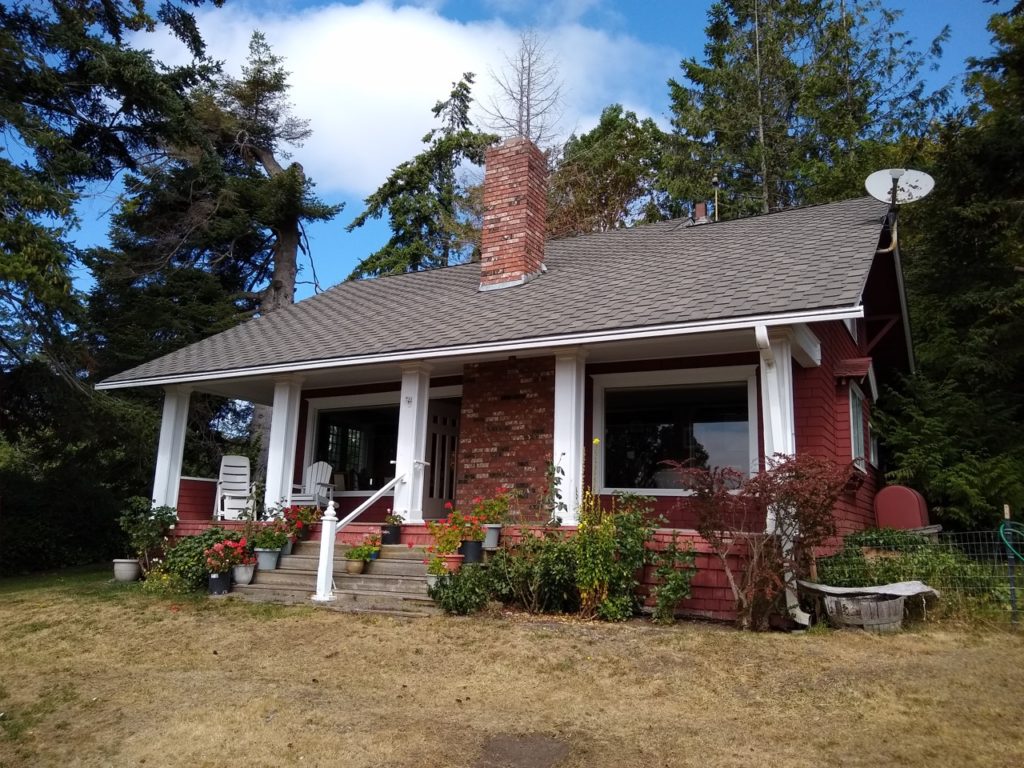 The house on Whidbey Island where the painting was hidden was built in 1929. 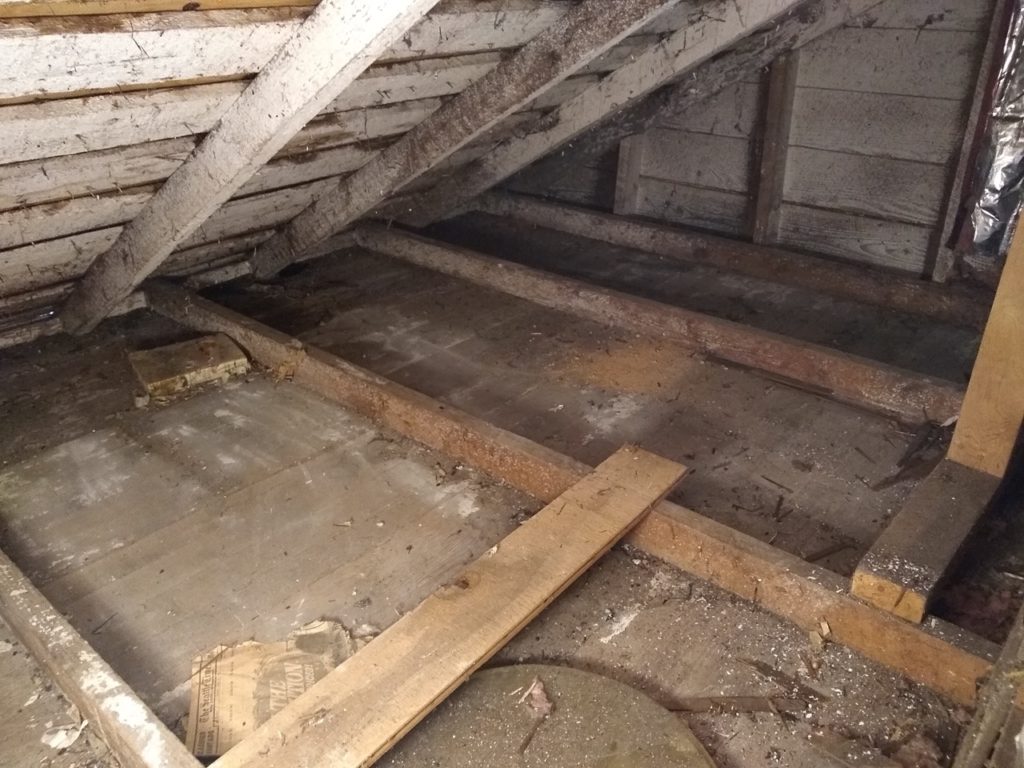 The painting was rolled up in this attic crawl space, as if the person who hid it had no intention of it being found. When Lawrence’s father found it, he put it into a rough frame and displayed it for many years. At one point, it was sent to UBC where it was x-rayed to see if there was another painting underneath (there was not). UBC determined it was painted by Howard Smith. 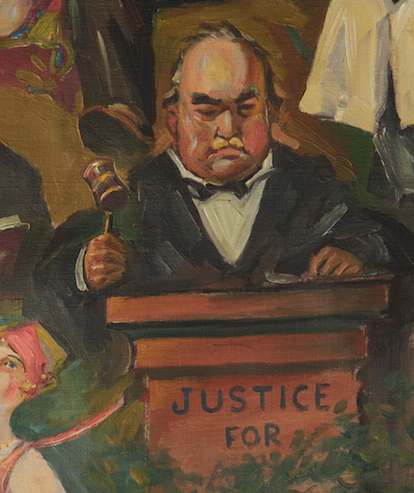 The significance of each character in the painting was not fully described above. The judge is shown above a lectern with the words “Justice for,” leaving out who or what the justice is for, thus indicating that the judge delivers justice blindly or for the benefit of the wealthy class above him. Next to him, the minister rolls his eyes upwards, as if he is preaching for the sake of the tycoon above him, rather than to appease some divine being 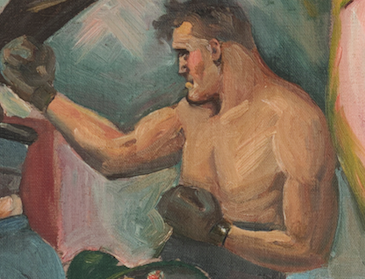 The prize fighter is likely Jack Dempsey, who was the champ in the late 1920s. 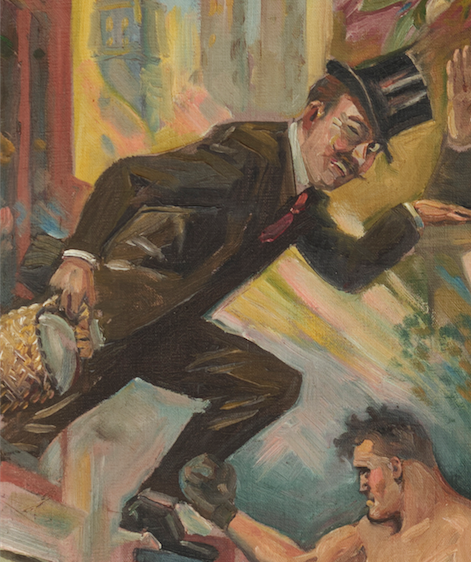 It is not clear who the well-dressed gent is with the jug in a basket or what the story is behind this character. Interestingly, it looks like he is floating out of a window, as soon after the Smith likely finished the painting  stock brokers were jumping out of windows when the stock market crashed.

The “Market Control” truck crashing into the apple vender likely symbolizes capitalism running roughshod over all else. 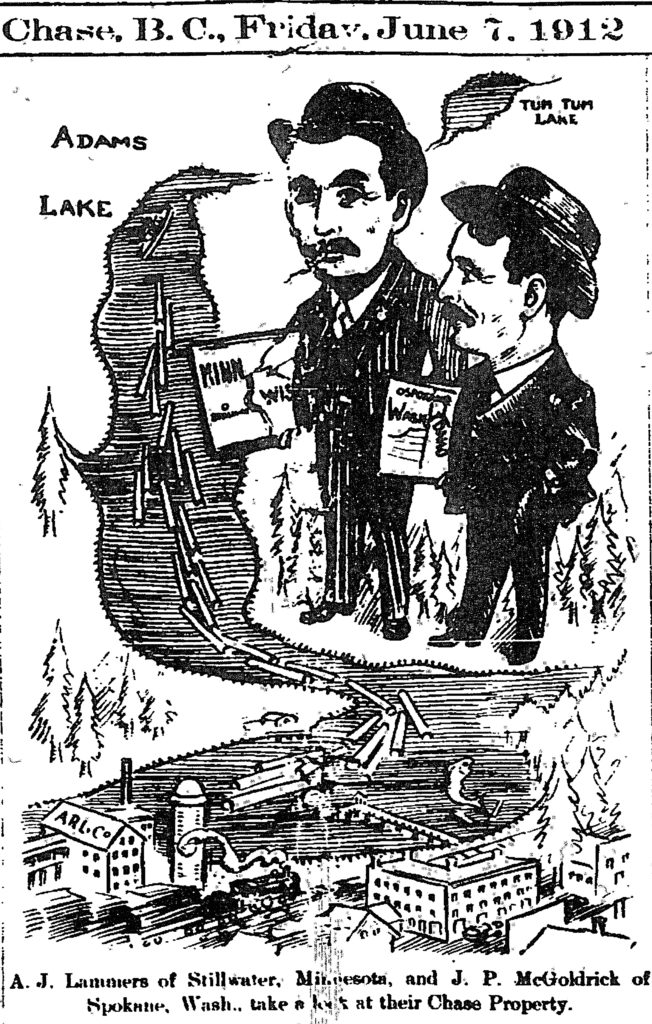 I think that Smith indeed was a social critic and perhaps a socialist. One of the cartoons he did for the Chase Tribune years earlier in 1912, showed the American owners surveying their massive timber berth that supplied their Chase sawmill with logs, which could be construed as being critical of this foreign ownership.

Ideally, given its significance, the painting should be purchased by the National Gallery so it can return to Canada. As well, the images should be distributed far and wide, so more people can appreciate it significance and educators can use it for teaching about that era.