A brief look at the history of Lee Creek

Home » A brief look at the history of Lee Creek 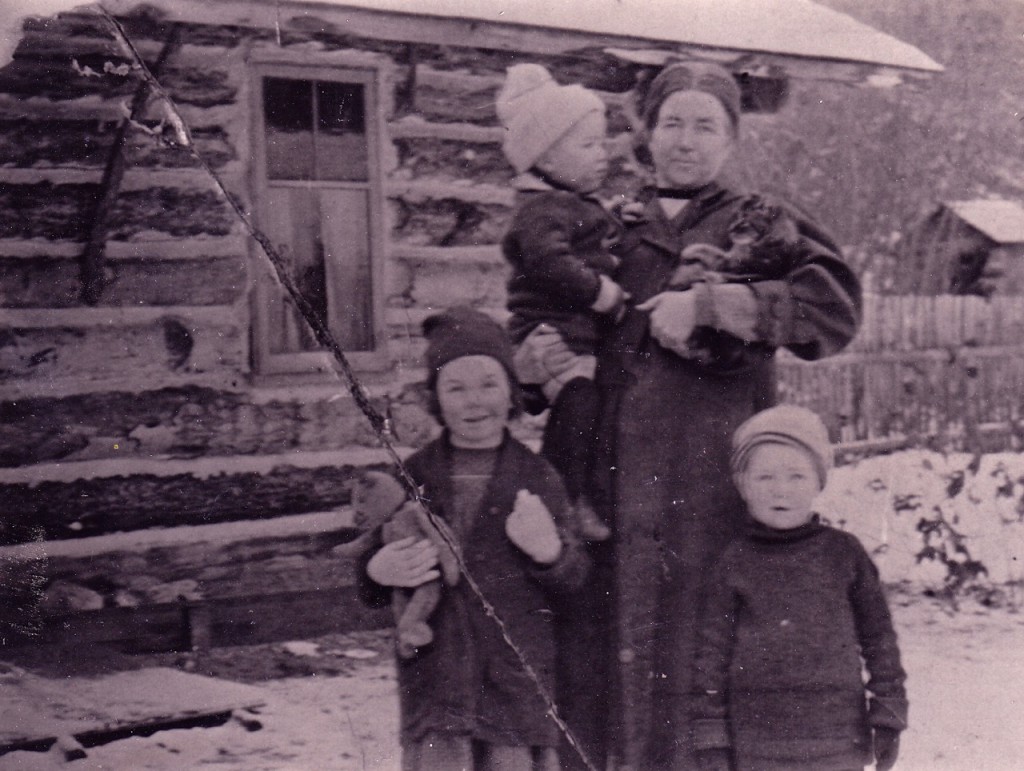 Isobel McKay with Barbara, Rory and baby Kenneth in front of their       first log house at McKay Bay near the corner

The history of the tiny, unincorporated community of Lee Creek, home to the world famous Adams River salmon run, serves as a prime example of how the Shuswap was settled and the determinants for success. The four key factors behind the viability of every rural community were economic capability, ethnic background, social cohesiveness and the individual strengths of pioneers. Lee Creek, like many other rural Shuswap communities, excelled in all but economics, as families depended upon income from work outside the community, which lacked extensive farmland. 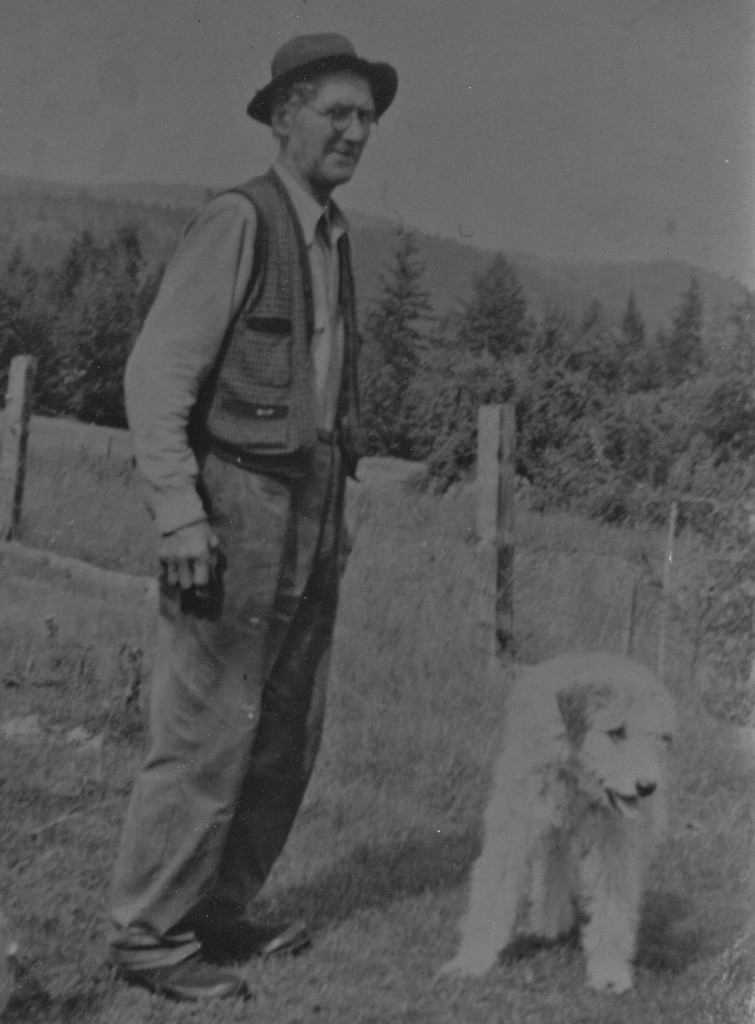 Permanent settlement began in 1906, when Oliver Freeman moved from the family farm in Ontario to homestead 120 acres on the shore of the lake adjacent to Lee Creek. His sister, Isobel and her husband Alex McKay soon joined him and in the following years came the Dempsters, Beatties, Cornings, Hopwoods, Lockerbys and more McKays. All were “back to the land” idealists with British, Irish or Scottish backgrounds, which facilitated their cohesiveness. And of course they had to endure hardships and work hard to survive, but as the late pioneer daughter Barbara McKay recalled, “It was what we did. Modern conveniences today make it seem like it was hard work.” 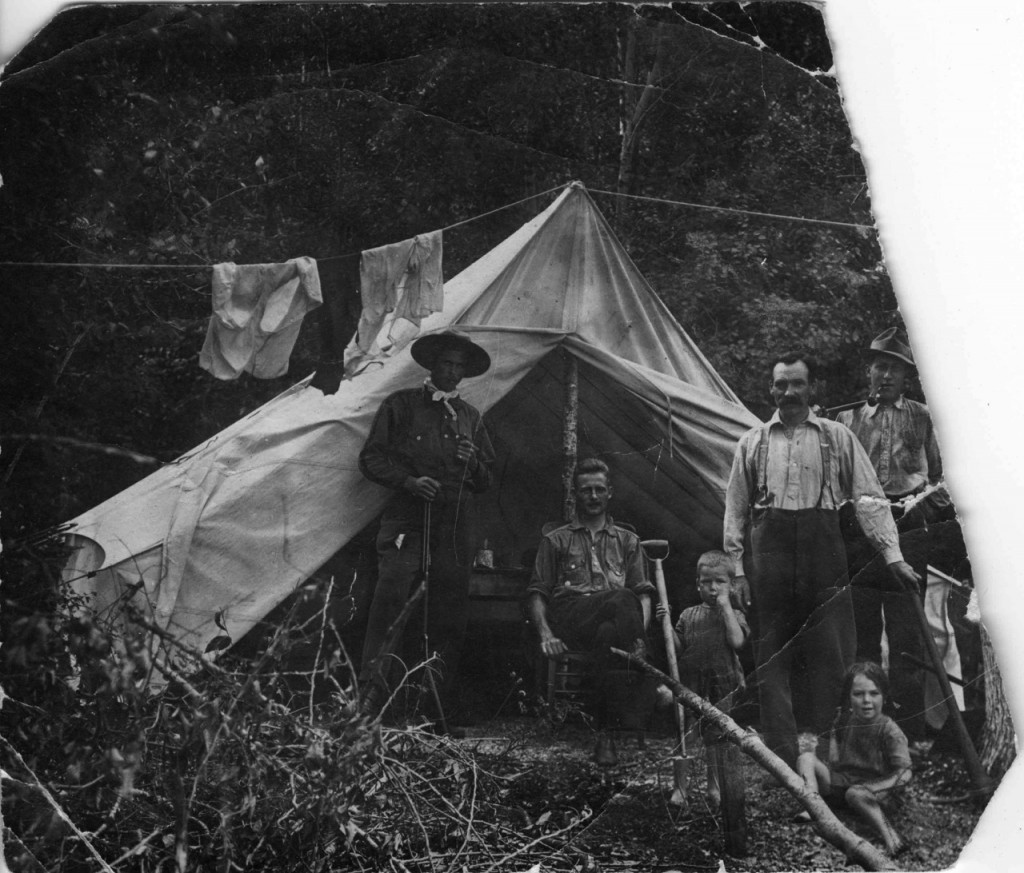 Alex McKay standing in the front on the right, many Lee Creek settlers first lived on the beach in tents

Only the bachelor Oliver Freeman made a living off of his farm, as the other men worked elsewhere as carpenters, house painters, road engineers and cooks. With the men away working, the women had more work and responsibilities than in strictly farming communities. All of the families were dependent on being self-sufficient by growing large gardens and raising livestock, with much of this work left to the women. 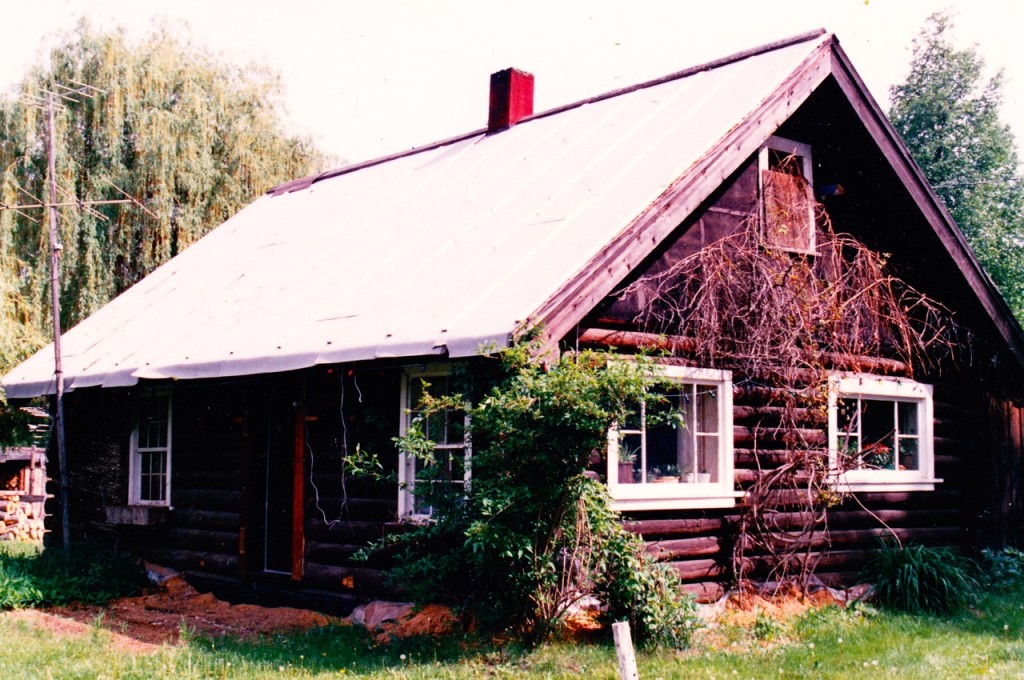 Bill McKay was a painter and his brother Alex likely helped him build their log home pictured above in this photo taken in the 1980s. It was the party house as they had a piano. The New family, who used to own the Cottonwood Campground lived here in the 1970s.

It was not simply their homegrown food or their earnings from elsewhere that helped the close-knit community flourish; it was also their vibrant social life. In the early days they travelled by boat, as there were few roads or bridges, to Sorrento and Blind Bay for dances, concerts and celebrations. They also gathered in their own homes for evening get-togethers with music or games and lively conversations. Social intercourse was essential to pioneer life, when the art of storytelling was one of the major forms of entertainment. 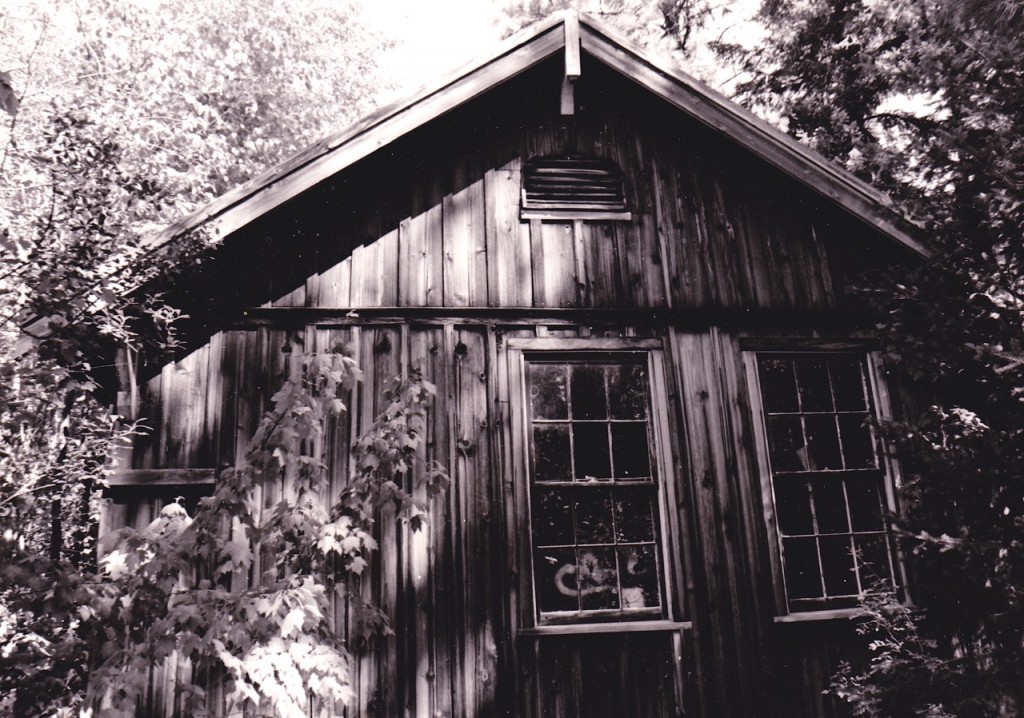 The Lee Creek schoolhouse in the late 1980s was deserted. It was last used as a garage and then was torn down in the 1990s, as it was on land owned by the Federated Co-op lumber company.

By 1919, there were enough children to require a local school. The community worked together and in just two months, using lumber from Oliver Freeman’s sawmill, the small one-room school was built. In those days, the only government assistance was to provide some funds for construction, the teacher and their salary. The community organized their own school board and collected funds each year to cover maintenance expenses.

As in other rural communities, the small one room school soon became the social hub for dances, church services, occasional political meetings, and school parties for every holiday. The major event of the year was the Christmas concert, for which the entire community contributed to the festivities. At the end of the school year, there was the annual class picnic and during the summer there were picnics at the beach or sometimes at Copper Island.

Another key to the success of the community was that the Lee Creek women were intelligent, creative and well-liked individuals who arrived with essential skills. Mrs. Connie Beattie was a nurse who provided medical assistance to her neighbours when needed. Despite being a city girl, Mrs. Corning was able to persevere the isolation and hardships of living with their infant son in a tent when her husband went off to war in 1917, thanks to her love of reading. One pioneer remembered visiting one day and finding her sawing firewood with a cross-cut saw while at the same time reading a French novel!

Of course social attitudes in Lee Creek were not always positive. Harry Hopwood was the only remittance man in the community, and his wife Nancy was a half-breed. They lived in a small log house with eight children and they had to endure the typical prejudice of the times. When their children were needed to open the school, they had to be coaxed to come. Only the girls attended and sometimes they were teased. Yet, there were some good times as well, especially the winter sledding parties when Mrs. Hopwood would invite the children in for sandwiches and hot chocolate. 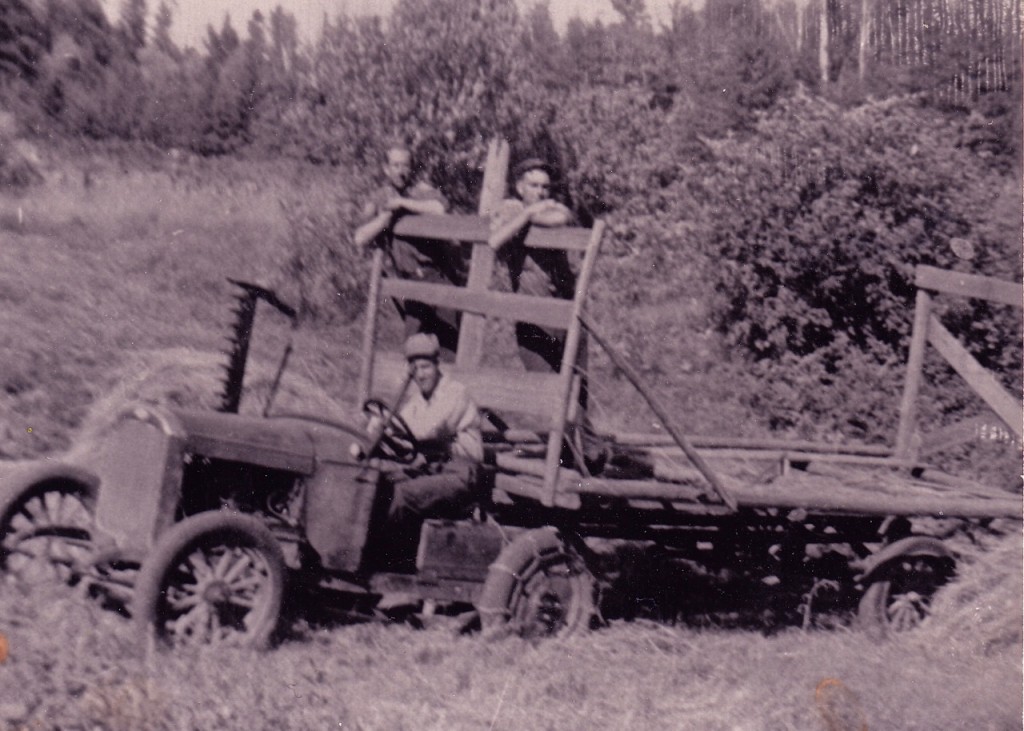 Lee Creek was a successful, small pioneer community as evidenced by the school that the pioneers established cooperatively and by their ability to cope with the isolation and labour-intensive life style. They were well educated, strong-willed and self-reliant and were able to look after both their physical and social needs. Most importantly, they shared the ideals and desires to work together cooperatively toward common goals. Many of these same traits can still be found today in the Shuswap, with its active volunteer organizations and busy community halls.

It was my curiosity about how our community of Lee Creek was named that sparked my interest in research local history. Soon I was writing about local history, then working with our local historical society, then helping publish a history journal , The Shuswap Chroniclesas the co-editor, and then this work evolved into environmental activism, followed by more research and writing and starting the provincial journal, The B.C. Environmental Report. Years later and now my focus again is local, with my column, Shuswap Passion and my soon to be published book on Shuswap geography.

Lee Creek has a fascinating history that began with Billy Lee, and English prospector who built a tiny log cabin alongside the creek that was later named after him. In 1884, an brief article in the Kamloops Sentinel described how he was stabbed after an argument in Scotch Creek. He later recovered and moved away. Years later the official name for the creek was changed to Corning Creek, after another original settler, Ray Corning, who became a well know highways engineer. Interestingly, the sign at the bridge reads Corning Creek (Lee Creek), probably one of the few creeks in the province with two names, an official one and a commonly used one that is also the name of the community. 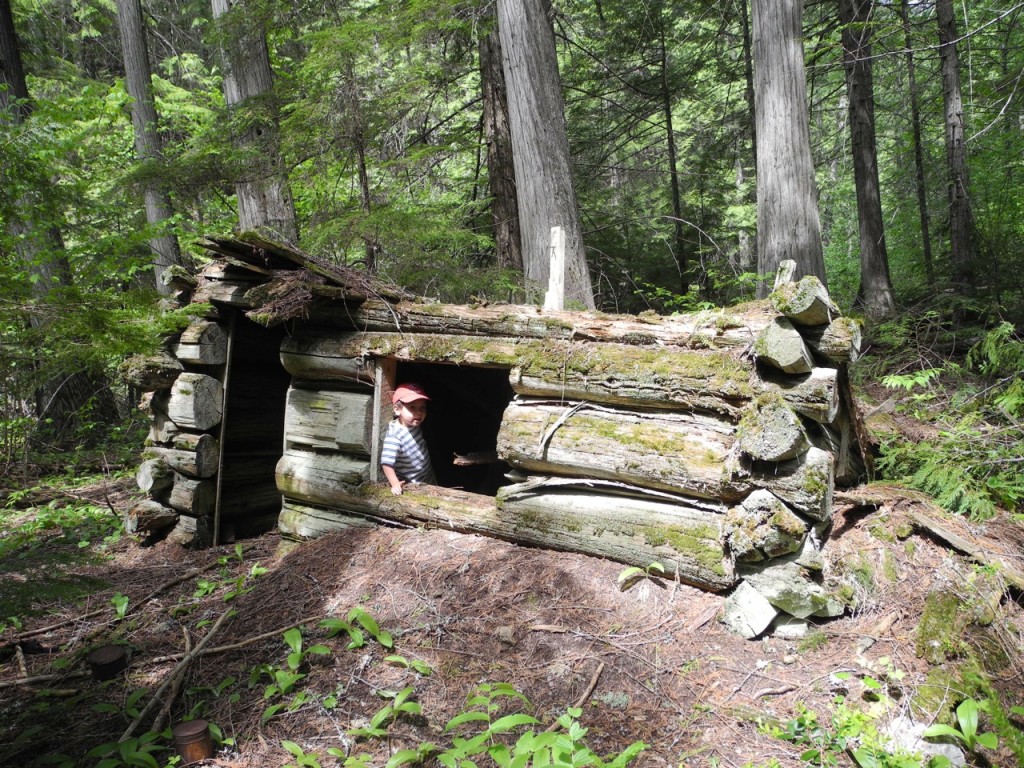 Lee’s cabin is still there, slowly rotting into the ground.

In the late 1980s, I managed to interview the sons and daughters of some of the original pioneers, particularly Barbara Wood (nee McKay). The tapes of these interviews were transcribed and there is enough material for a book, which I hope to write one day. This column is a concise version of a paper I wrote for a local history course at Cariboo College (now Thompson Rivers University) taught by Andy Yarmie. The entire paper appears in volume four of the Shuswap Chronicles, which is still available at local stores.