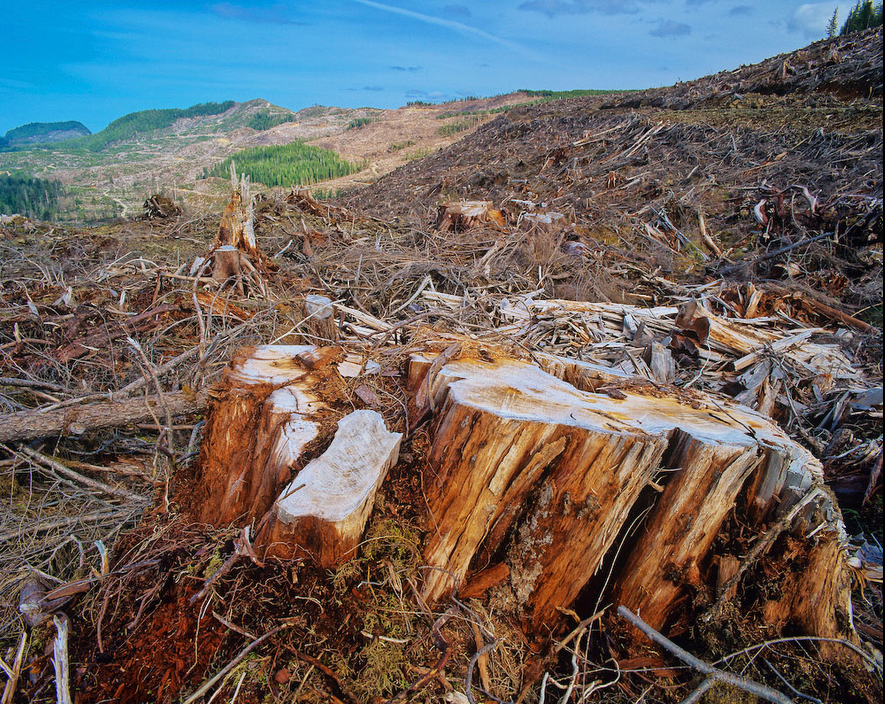 Despite the election of what we often thought would be a more environmentally friendly government, British Columbia’s public forests continue to be disappearing at an alarming rate, with inadequate stewardship for all values including fish and wildlife habitat, community water supply protection, and recreation. Although these forests belong to the people of B.C. and to future generations, they are being managed primarily to benefit a few large corporations. Urgent reforms are needed to meet the needs of present and future generations and yet to date, little has been done.

The BC Liberals created the problems. The Council of Forest Industries helped them to develop the Forest and Range Practices Act (FRPA), which ended government oversight and allowed forest companies to operate carte blanche for 15 years, enabling liquidation forestry by downplaying or entirely disregarding “non-timber values.” Now the NDP, who were once the architects of the long defunct Forest Practices Code, who more than doubled the size of the park system, and implemented Land Use Planning, are only making minimal changes to address the problems and reverse these destructive policies.

As a result of the professional reliance review by Mark Haddock, an oversight body was created called the Office of the Superintendent of Professional Governance in the Ministry of Attorney General with a goal to ensure best practices are implemented. As well, Bill 21 has been introduced that when legislated will amend FRPA to improve public input and information sharing by requiring licenses to prepare operational mapping for review and revise the wildlife definition to better protect at-risk species. More changes are in the works, but it is unlikely that the NDP will reduce the unsustainable rate of cut, revise the forest tenure system (other than Bill 22 which will allow the Minister a veto over transfers of tenures and cutting rights) or remove the caveat that protection of non-timber values must not “unduly reduce the supply of timber.”

The BC forest industry has now consolidated to five large corporations that control 60 percent of the allowable annual cut. Thanks to generous subsidies (including operating without oversight, causing property and ecological damage with the bills going to the public taxpayers, and long term, give-away licenses to control vast swaths of public land to log publicly owned forests) these companies are taking their profits and investing them in U.S. and Swedish mills, which they will be able to operate long after BC’s accessible forests are cut over because these mills cut fast growing, southern pine. So far, B.C. forest companies have purchased 51 mills in the U.S. and 9 mills in Sweden, more than they own in this province.

The forest industry has far more influence over policies and laws than it deserves, given that its contribution to the province’s GDP has been decreasing along with the number of jobs it provides. Forestry only represents 5 percent of the total B.C. economy (GDP) and only 3 percent of the direct jobs. Mills have been closing as wood supply runs out, including the recent closure of the Port Alice pulpmill, the Tolko sawmill in Quesnel and partial shutdowns for Canfor mills.

Massive amounts of forest land (3 million hectares economic and over 8-million non-economic) are denuded and there is no money to replant them, given that the government and companies can barely keep up with the costs of planting the areas that have been logged recently, annual wildfire suppression costs and disaster relief to communities for floods and drought, let alone deal with the millions of hectares that have been burned in recent years. BC forests stopped being a carbon sink in 2001 and now add far more carbon to the atmosphere than any other source every year.

The liquidation is moving into the high elevation forests, some previously considered inoperable, which is upsetting the hydrologic balance resulting in massive flooding that is destroying property, including the city of Grand Forks and Okanagan Lake communities. Loss of high elevation forest impacts local climates by removing the cool moist air that normally flows from damp forests down in the evening to cool off the lower hills and lakes. Loss of the evening cooling breezes further warms the valleys, which increase the likelihood of wildfires.

Land Use planning, which produced so many benefits was shelved by the Liberals and now is barely getting any attention by the NDP. In the Okanagan, parks designated by consensus planning were put on hold in 2001 due to a proposed National Grasslands Park remain in limbo with some now threatened by logging, even though most of them are not grasslands. As well, protected old growth is being logged and mining threatens a wildlife area. Yet, the NDP is refusing a land use planning re-boot. 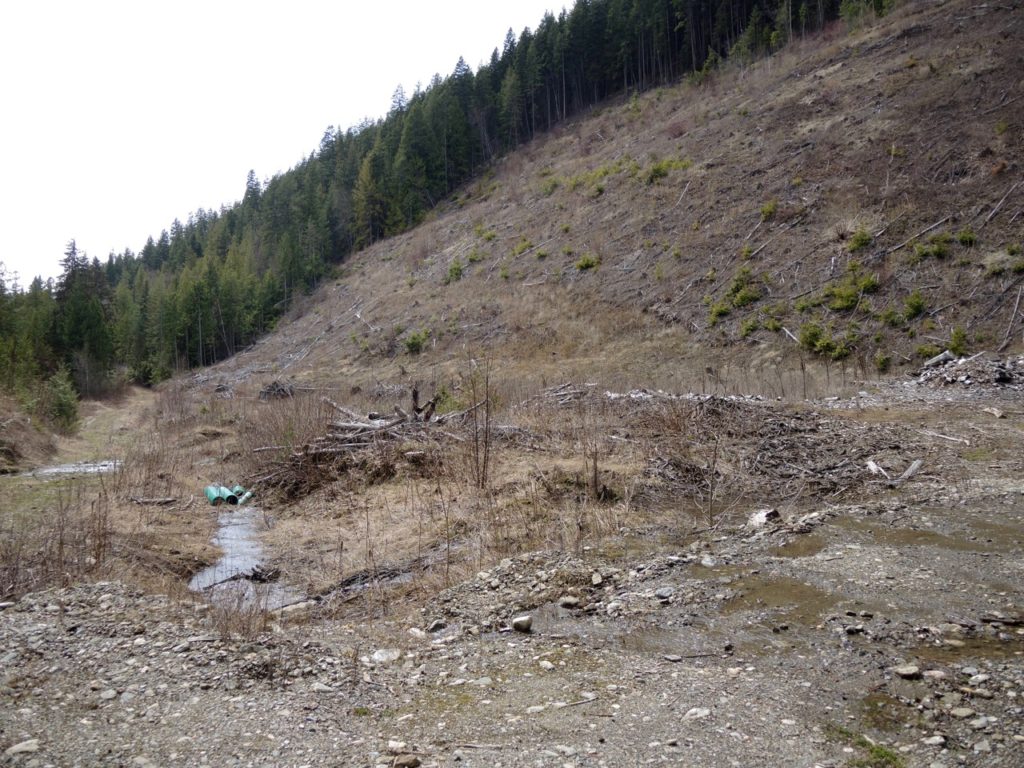 Rapid snow melt off this clear cut above Sunnybrae at Shuswap Lake resulted in a debris torrent that destroyed homes in 2017, photo by Jim Cooperman

BC Timber Sales (BCTS) has approximately 20 percent of the cut and they are irresponsibly logging in community watersheds, which damages water quality and quantity, as well as poses erosion risks. In order for us to better understand the risks of proposed BCTS logging on a landslide prone hillside in a nearby local community watershed, we have requested a copy of the hydrological study, but were refused. Consequently, complaints have been filed with the Forest Practices Board and we have submitted Freedom of Information requests for the document. 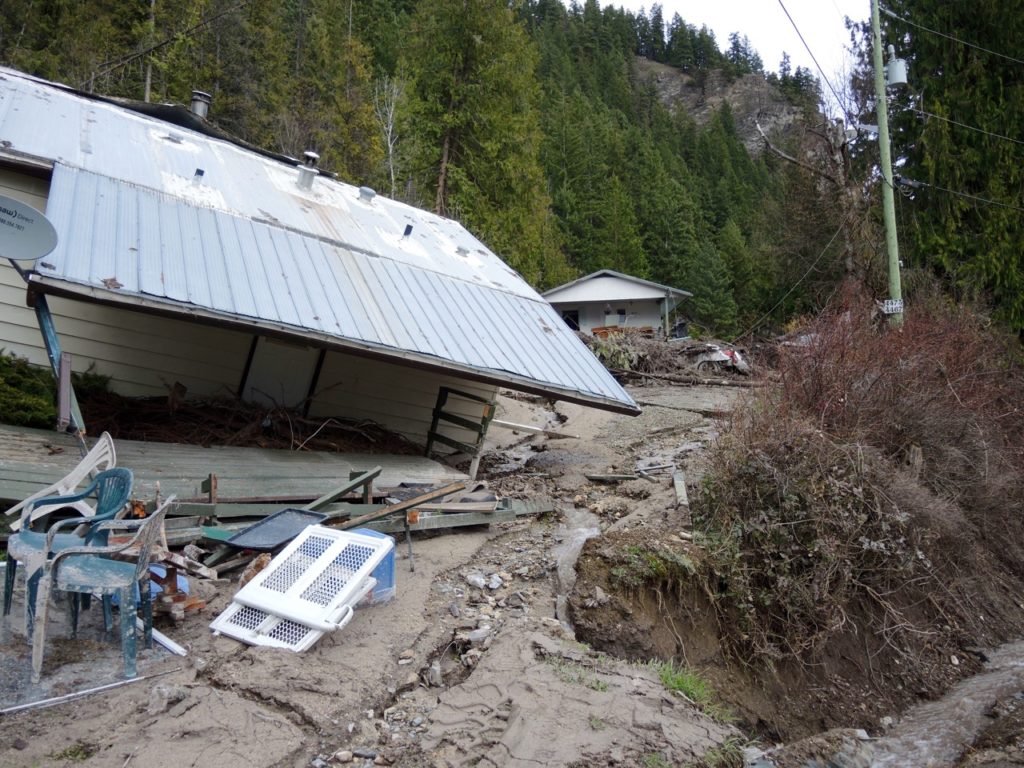 The final forest liquidation is laying waste to essential fish and wildlife habitat, especially the endangered species like caribou, owls and salmon and eliminating the final remnants of coastal old growth forests on Vancouver Island. Critical habitat for the mountain caribou adjacent to Wells Gray Provincial Park has been clearcut and more logging has been approved. Logging is not the only problem, as fracking development is degrading northern habitat with roads and drilling pads. The NDP promised to bring in endangered species legislation and although the bill has been drafted, it has been delayed with no implementation in sight.

To summarize, the NDP is not reversing the corporate give-away policies of the BC Liberals, thus allowing the final liquidation of British Columbia’s publicly owned forests, which will increase the number of floods and fires, destroy more fish and wildlife habitat, and produce more debts rather than benefits for the province, while many of the profits are flowing to corporations that have invested in mills south of the border.