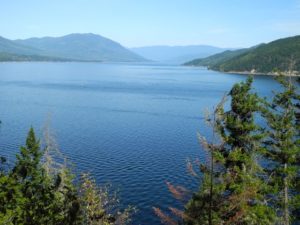 Since Shuswap and Mara Lakes are the source of drinking water for a large percentage of the region’s population, some residents have referred to the lakes as drinking water reservoirs due to their interest in maintaining high water quality. Yet, calling these lakes reservoirs is misinformed, as most lakes are complex ecosystems, that support a wide diversity of life forms and the biology of the lakes varies according to the season of the year and the variety of natural and man-made inputs. By and large, most of the Shuswap and Mara Lakes area is classified as oligotrophic with clear, relatively nutrient free water, as are most lakes in the Shuswap.

Lakes that contain higher levels of nutrients and thus higher concentrations of algae are called mesotrophic. Salmon Arm and Tappen Bays are mesotrophic, due to the slower flushing rate of the water in the bays and to the nutrients entering the lake from the sewage treatment plant, storm water and the Salmon River. Monitoring efforts are also showing an increase of nutrients in the Shuswap River where it flows through agricultural areas. Gardom Lake is also classified as mesotrophic, due to the naturally occurring levels of nutrients and algae.

Sediment core sampling done by the Ministry of Environment in 2006 has revealed the trophic status of Shuswap Lake since the year 800 by the annual deposits of sediment and diatoms.  The core shows the input of nutrients have been steady in Tappen Bay since before settlement and there has been a slow increase beginning in 1970.

In 1931 a detailed limnology study was done in Shuswap Lake that identified all the organisms present at different levels. Plankton was most abundant in the sheltered bays and the nets recovered 54 different species, including 13 types of algae. There was a similar level of shoreline invertebrate diversity that included 6 types of molluscs. 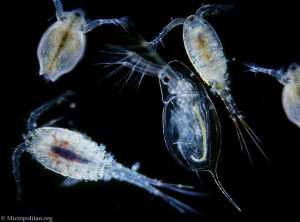 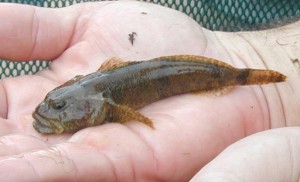 Although the majority of the lake shoreline is rocky, the study found an abundant growth of aquatic plants in the sheltered bays, which provide food and habitat structure for other organisms. Included in their list were various forms of pondweed, quillwort, arrow grass, horsetail, and bladderwort. Interestingly, there was water milfoil back then, but not the same variety of Eurasian milfoil that invaded Shuswap Lake in the 1980s. 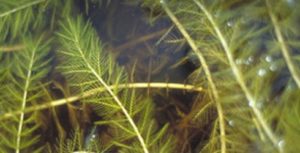 Ministry of Environment biologist Dennis Einarson explains that they have now found 4 types of milfoil in the lake as well there are species of algae from most of the 20 orders. And during the two, never seen before chrysophyte algae blooms in Shuswap Lake in 2008 and 2010, there was a video taken that shows zooplankton gorging on the algae and salmon fry feasting on the plankton. 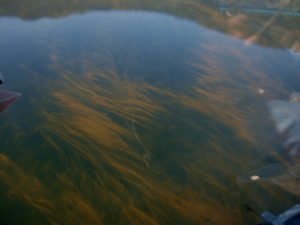 A number of factors, besides the quantities of nitrogen, phosphorus and chlorophyll, affect the trophic status of lakes and the distribution of organisms. Key to the continued health of Shuswap and Mara Lakes is the rapid flushing of the water, which for most of these lakes is estimated at just one to two years, with slower water movement in the bays. 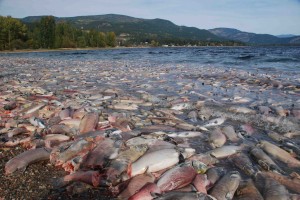 Perhaps the one of the greatest input of nutrients occurs after large salmon runs in the rivers, when many of the decomposing carcasses are washed into the lakes either in the fall or the spring. These nutrients feed growing numbers of algae (phytoplankson), which in turn stimulates the growth of zooplankton.  Whereas the emerging salmon fry then feast on the plankton and the chain of life continues to circulate.

Light, temperature and wind are also key factors.  The depth that light can penetrate controls the amount of photosynthesis that can occur. Shade helps cool the water, which fish require, particularly in creeks and rivers.

Lakes contain a rich web of organisms at different trophic levels, where one life form feeds on another.  Beginning with bacteria, there are single and multi-cell plankton, free floating and attached algae, zooplankton, plants, insects, invertebrates, amphibians, and fish. Then, of course there are the fishers, some with rods and some with wings. 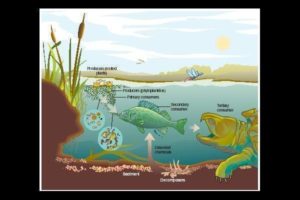 While it is important that water quality monitoring work continues and efforts are made soon to reduce the amount of nutrients entering the lake, attention should also be directed at the biodiversity of the lake. The growing number of concerns from fishers about an increase in the number of lesions and growths seen on trout raise questions about potential problems. Shuswap and Mara Lakes do more than just provide drinking water for most of us, they are also a rich ecosystem that is home to countless numbers and types of organisms and we need to ensure that the delicate balance is not disturbed.

A Contribution to the Limnology of Shuswap Lake