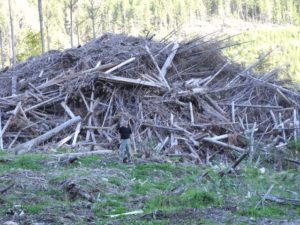 One of many massive slash piles to be burnt in B.C.’s forests

Forestwatch is a listserve with over 100 members that has been active in one form or another since the late 1990s. Typical postings include news items about BC forest issues, press releases and occasional local observations or viewpoints. The listserve was abuzz recently, when Mark Haddock, who is with the UVic Environmental Law Centre, requested input about forestry operations for a talk he was asked to give at the upcoming Southern Interior Silviculture Committee convention.

The response was overwhelming, as activists and professionals from across the province unloaded a file full of observations regarding the current sorry state of forest management. Chief among the concerns were the impacts from overcutting and how the obvious gap between the current Annual Allowable Cut and the actual lower rate of cut indicates the declining amount of timber actually available to log.

There was not full agreement on one topic, however. I emphasized the often-heard concern regarding the increasing size of the once forested areas deemed Not Satisfactorily Restocked (NSR). Despite estimates that often begin in the range of one million hectares, the province has done little to increase the level of planting, and of equal concern, it is failing to maintain or improve the inventory.

However, one observer, James Steidle, took exception to the NSR concern, explaining how efforts such as the use of herbicides as a remedy, are misguided because deciduous trees not only have value, but also significantly contribute to biodiversity. He believes that more of the logged over forests should simply be allowed to naturally regenerate and that the province needs to utilize Aspen as done in Alberta, rather than waste these valuable trees that are usually considered a weed species.

The almost complete lack of government oversight is a major concern, such as when forest service staff no longer review licensee plans, many values can get impacted, including Species At Risk Act species, and no one will ever know. On the ground, this complete abdication of responsibility to industry means that cutblocks no longer have featheredges, resulting in blowdown, and no-machine zones are substituted for reserves, resulting in a loss of biodiversity values. Also, wildlife tree patches are too often located in inoperable sites rather than located to best protect wildlife values.

Another concern expressed is the lack of any record that shows cumulative impacts of multi-resource activities. In some areas of the province, the landscape is not only covered in roads and clearcuts, but there are also mining activities, oil and gas exploration, motorized recreation, Independent Power projects and even communication towers and powerlines. In fact, despite a ministry that now includes just about everything, the Ministry of Forests, Lands and Natural Resources, there is no effort made to investigate land modification activities related to mining.

In fact, enforcement of most rules governing crown land is miniscule at best, including preventing or penalizing those who trespass, make illegal structures, break fish and game regulations, or damage habitat with off-road vehicles. We are still waiting for off road vehicle legislation that has been promised for a few years. And the lack of oversight also applies to the vast network of logging roads, as there is no comprehensive management system in place.

Concerns regarding policy issues were also expressed, such as log exports, which have increased and now comprise ten per cent of the province‚s total cut. Also, government is once again considering a plan to expand the Tree Farm Licenses throughout the province despite widespread opposition. The loss of the research department a few years ago is likely impacting the quality of the knowledge base required for responsible, sustainable forestry.

Meanwhile in the Okanagan…

So many of the comments received were quite predictable, given the sorry state of forestry in the province. However, many of us were not prepared for the serious litany of concerns about forestry in the Okanagan and elsewhere by longtime activist and Okanagan Similkameen Parks Society Director, Clive Johnson. Unlike many of us, Clive spends 20 to 30 days a year in the bush, monitoring the impacts of unsustainable forestry activities. Last year, he visited Kinbasket Lake, where he observed three small herds of caribou, but was shocked to discover most of the remaining caribou habitat was marked for logging.

In the Okanagan, Clive‚s backyard, he has witnessed larger and larger openings, from 200 hectares to 500 hectares and larger, with 100 per cent site disturbance. There appears to be no effort to maintain wildlife corridors and there is no regard for water quality, quantity or timing of flow. Many wildlife tree patches blow down in a year or two and this blow-down is so thick, even moose cannot get through.

Clive witnesses thousands, if not tens of thousands of large burn piles each year in every type of ecosystem, with up to 20 to 30 per cent of the pre-logging stand in the pile. And this is not beetle wood, but usable timber that is just not profitable for the companies to truck out to their mills. Sometimes, Clive even spots large logs dumped over the down slope of roads. Fortunately, however, the beetles so far have not become a huge problem yet in the Okanagan.

Of course, all this waste wood, which includes far too much usable timber, is burnt in the fall and early winter, adding more C02 to the atmosphere and often polluting the airshed for local residents. Clive believes that at least some of this woody debris should be left on the block to provide habitat for small mammals and to return nutrients to the soil.

While Clive has seen many new trees being planted, many of these young seedlings get stressed by the sun and are often tromped on by cattle. In sites where the first planting was not successful, he has yet to see re-planting. Clearcutting has been going on in the Okanagan since the 1970s. While there are many old cutblocks that are now plantations with established young forests, Clive is convinced that these trees (mostly pine stands that were planted in what was once spruce forests) will never reach volumes that are even half of what is expected and what is being used to base the current cut on. As well, biodiversity in these stands is very low and the trees are often so thick that wildlife would need to pack a lunch.

What was most alarming about Clive‚s input was the news of the latest threat to old growth forests from wind farms. There are now proposals for wind power towers and transmission lines for vast areas of crown forestland in the Okanagan, and many of the maps show sites located in what are now supposed to be protected old growth management areas. If these proposals are approved, biodiversity will take a major hit as the ancient trees will be cut down for wind power generation that will likely only produce electricity for export.

Meanwhile, on the issue of oversight, Clive sees no one inspecting blocks, no one checking roads, no one doing waste assessments and no road checks for volumes on highway hauling. The forest service has yet to implement all of the agreements resulting from the Okanagan Shuswap Land and Resource Management Plan, signed back in 2001. And his final suggestion to Mark sent shivers up spines, “What would you say to this group of foresters? If they are under 50 years old I would suggest to them that they should start looking for another kind of work. I don’t see where they will find employment ten years from now. Unless we put an immediate stop to this current liquidation of our forests, there will soon be no intact working forests for them to practice their profession in.”

Note: This article was published in the March-April Watershed Sentinel, see their website