In search of the Shuswap’s most significant trees

Home » In search of the Shuswap’s most significant trees 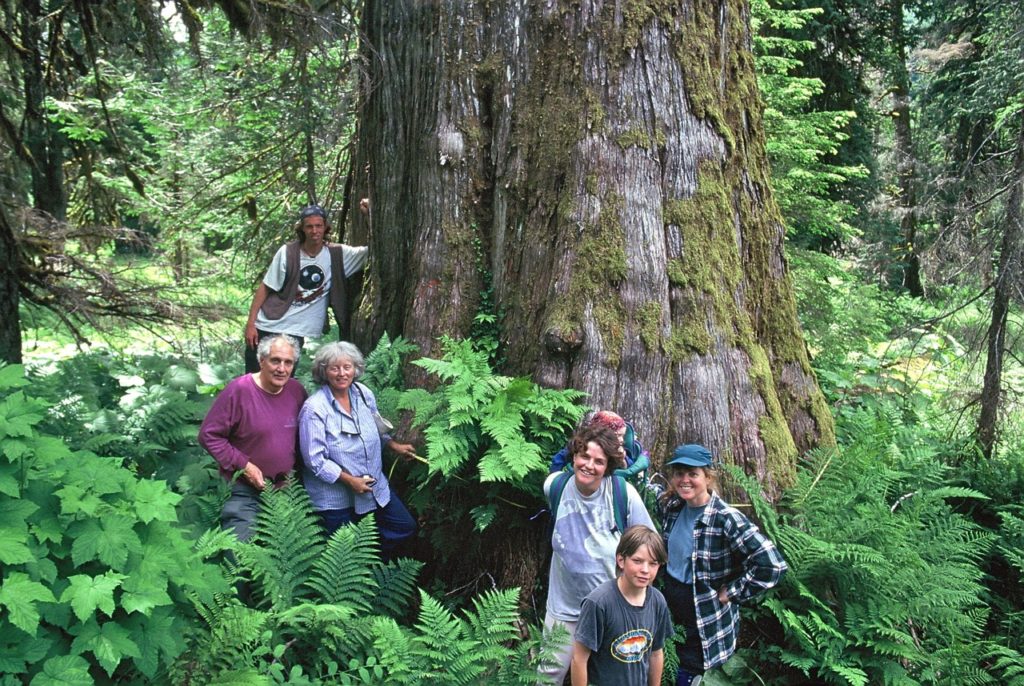 Retired Fernie city engineer and author Terry Nelson is on the hunt for British Columbia’s southern interior’s exceptional trees for an upcoming book on the topic. His first book, a Fernie and area trail guide and natural plant compendium was a big success, and now Terry is keen to provide, data, photos and background information about the significant trees found in and near each community, including celebrated “urban trees.” Our challenge is to determine which Shuswap area trees deserve to be included in the book and why these trees should be deemed significant. 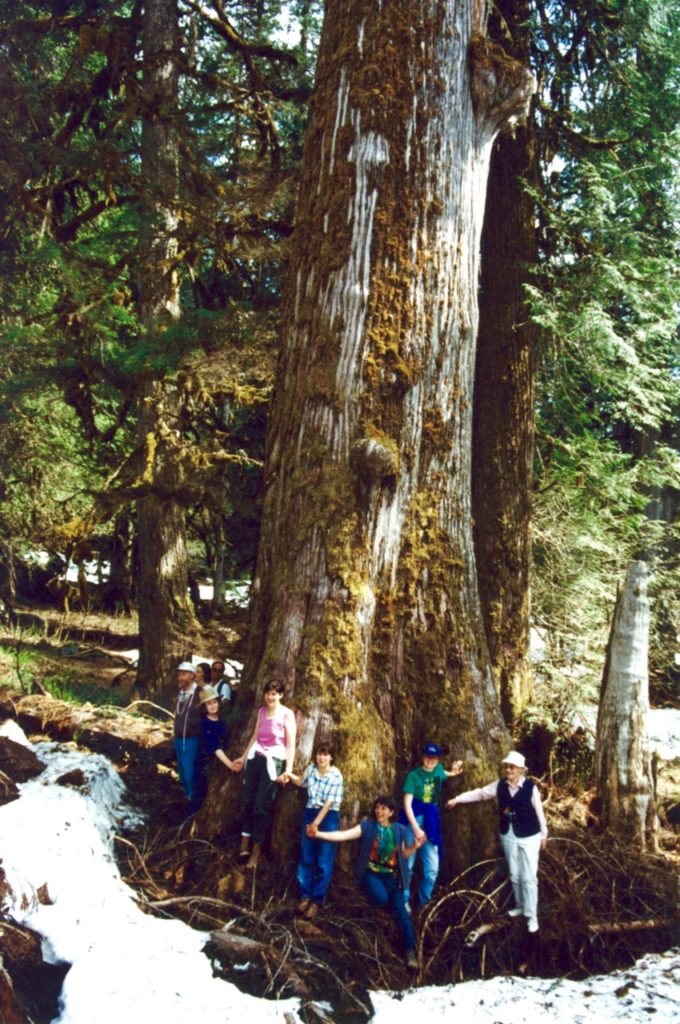 This photo of the The Seymour Giant helped gain the area provincial park status.

At this point there is only one confirmed tree in the Shuswap that has been recognized and named, the Seymour Giant. This massive, 3.65-metre (12 foot) diameter old growth red cedar is the tree that became the poster child for the campaign to protect the Upper Seymour River rainforest. A framed photo of the tree surrounded by conservationists was given to the forest service regional manager in Kamloops, who then decided to issue a moratorium on the clearcut logging planned for this rare interior antique rainforest. 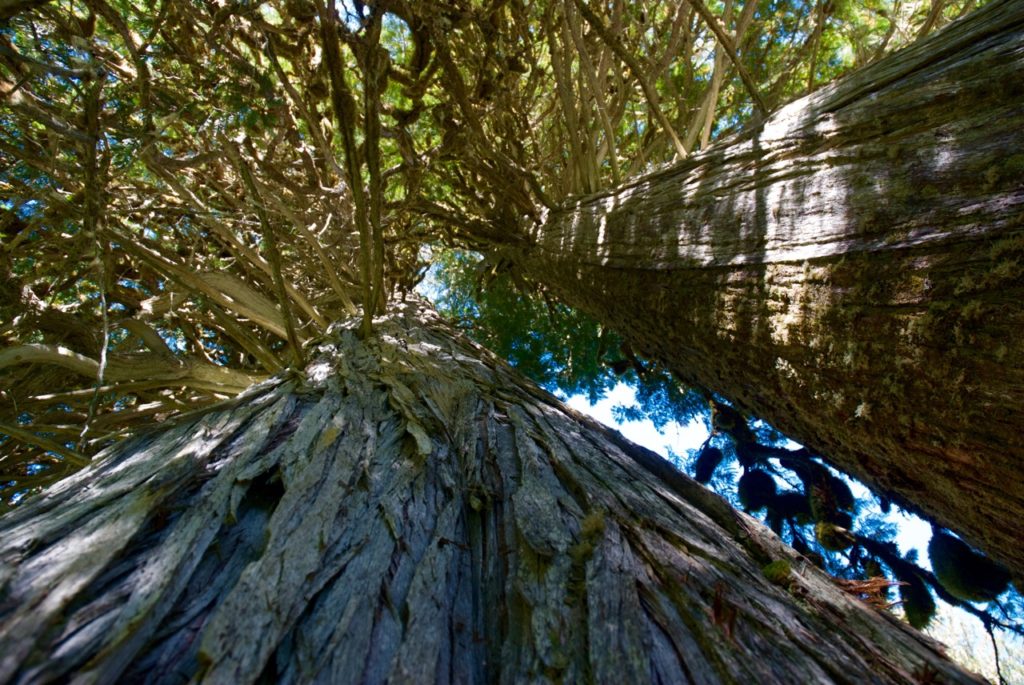 To date, only a handful of people have visited the Upper Seymour, and fewer have spent time exploring the area. The Seymour Giant stands adjacent to what would have been a landing area for the logging and when I last visited the forest, the tree had lost some of its top to a storm. There could be larger trees in the park, but given that the access has become more difficult with the road overgrown, it is unlikely that anyone will be exploring the area anytime soon. 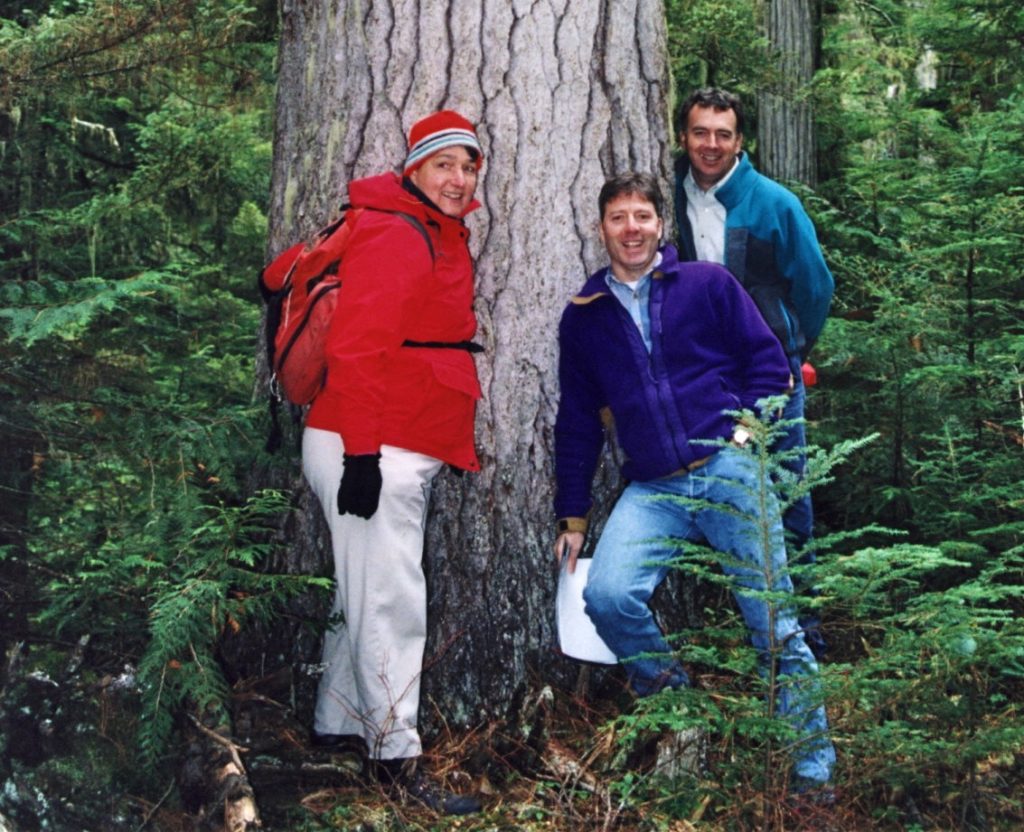 There are many potential sites to find large, old growth trees in the Shuswap, including in any of the protected old growth management areas, parks and even on private lands. An excellent candidate area is the Larch Hills, where there is a protected old growth forest intertwined with Violet Creek Provincial Park. The largest, most accessible tree along the White Pine Walk trail may deserve to be in the book. 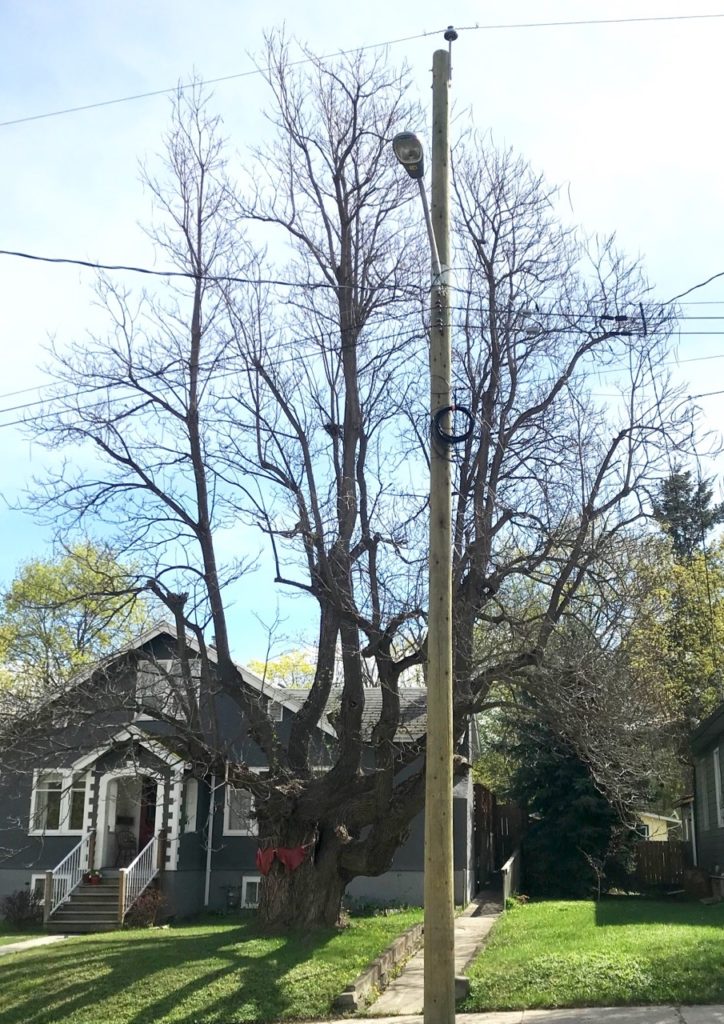 The large Catalpa tree on Third St. in Salmon Arm

Within each community there are ornamental trees that were planted over one hundred years ago and have large girths and canopies. One example is the giant catalpa tree on Third St. in Salmon Arm, which is larger than the catalpa tree next to the art gallery. In the spring this tree is covered in large white blossoms, which turn into long seedpods in the fall. 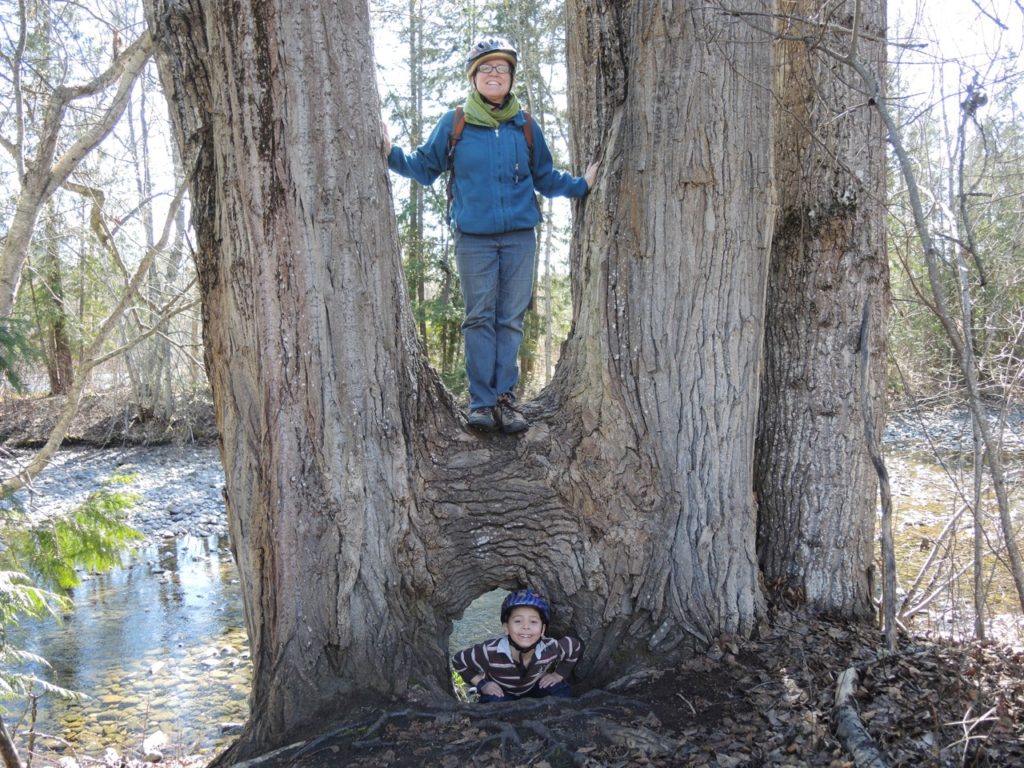 Along the Adams River in Tsúwecw Provincial Park, there are many ancient huge black cottonwood trees. There is one very special twin cottonwood that has two trunks connected with a horizontal trunk and this tree is a favourite spot for photos along the trail to the bridge. Its unique shape sets it apart from all the other trees and should earn it a page in the book. 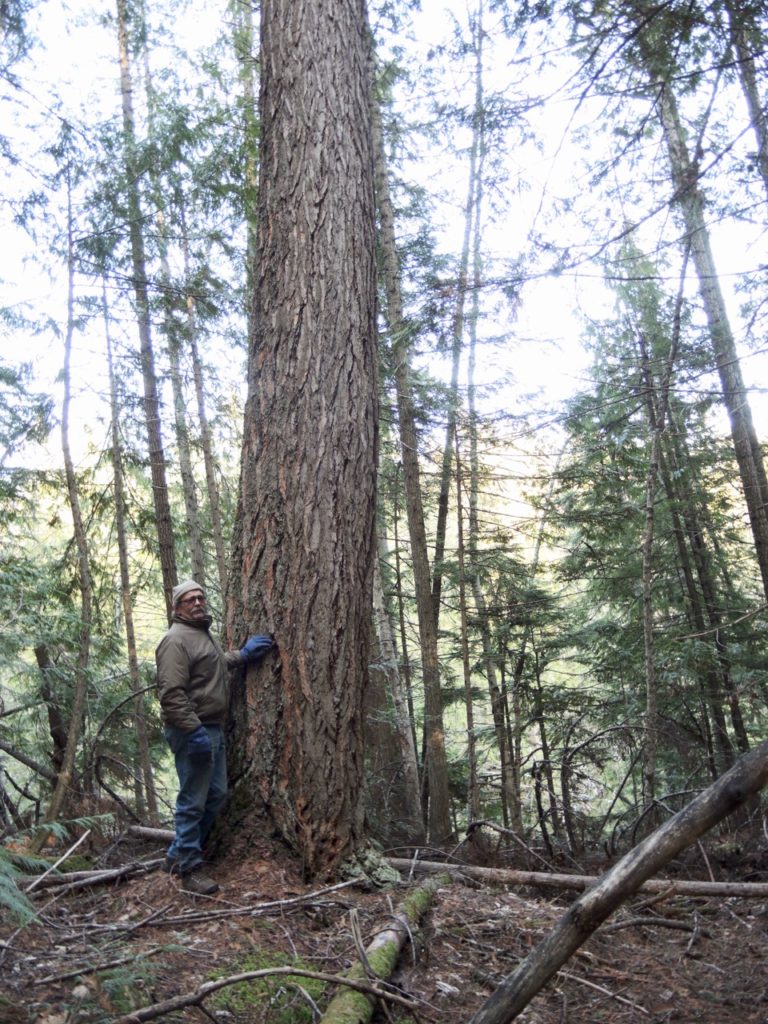 The Douglas fir has long been the preferred species for lumber and most of the giant ones close to communities were logged over one hundred years ago. Many of the large ones left are called “vets,” because they survived one or more fires and often their bark is blackened as a result. Typically these remaining old growth firs are over three hundred years old and have diameters larger than one metre. There are two exceptional Douglas fir trees along the newly restored trail above Celista adjacent to Farrells’ Field that certainly deserve recognition. 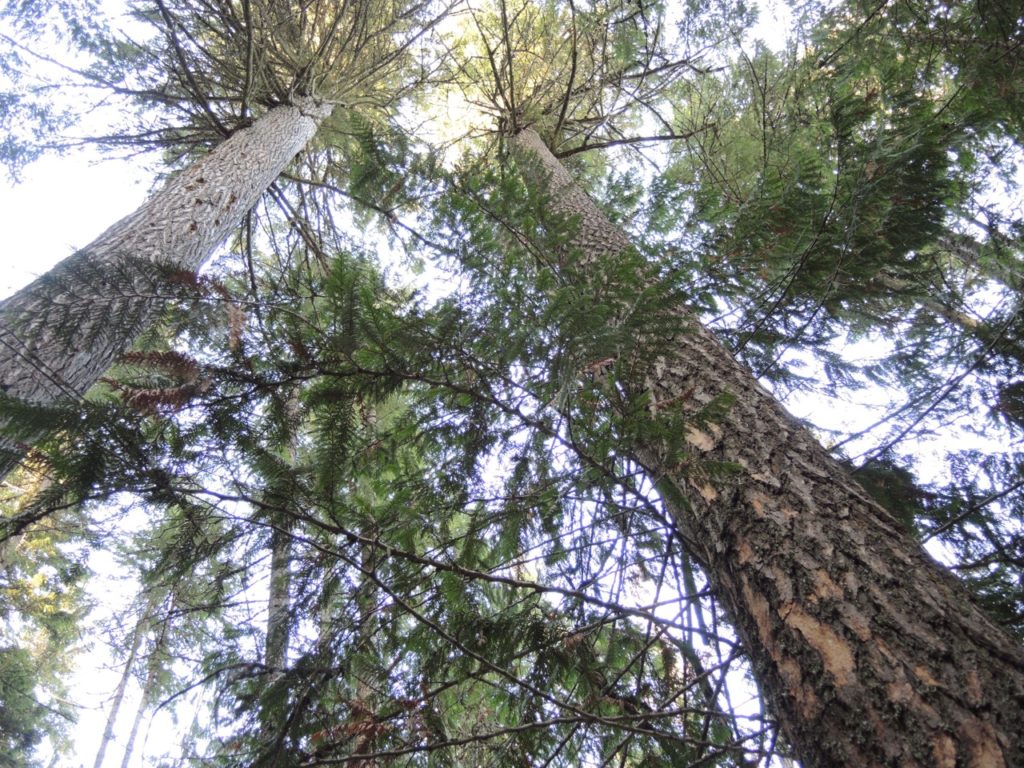 Enormous ponderosa pines are numerous in the Shuswap, as these trees are rarely used for lumber, so loggers have avoided cutting them down. There certainly must be an exceptional large and accessible one somewhere that deserves recognition. 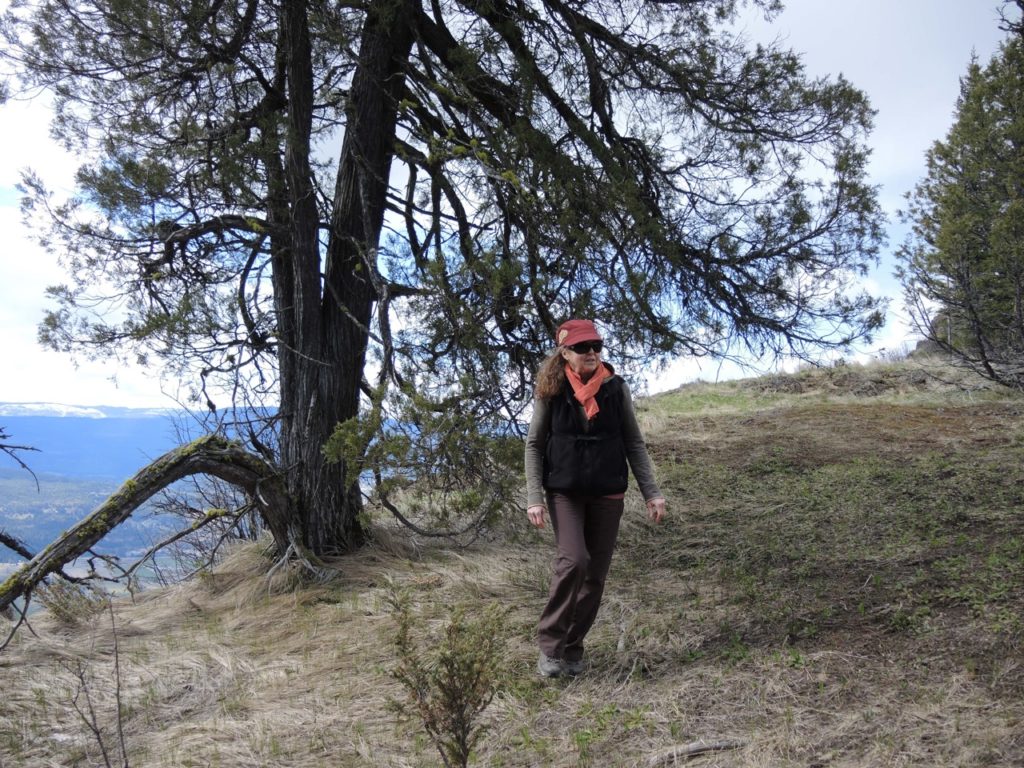 The large juniper tree at the top of the Enderby cliffs

The last time we hiked the Enderby Cliffs, I noticed there are some very large juniper trees along the cliff’s edge and thought that someone should take a core to date the trees, as they could be quite ancient. 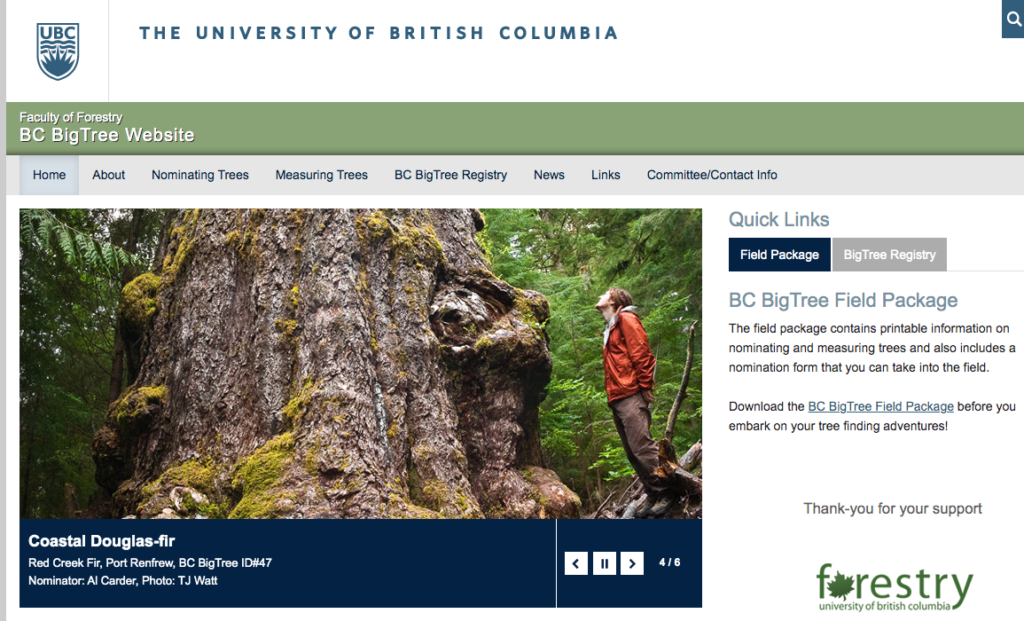 The University of British Columbia Faculty of Forestry maintains the BC Big Tree Registry website, where all the trees listed have been measured and verified by professional foresters. This list includes a number of trees in the Shuswap, including near Lumby, Cherryville, and Scotch Creek.

If you know of a large or unique tree that deserves recognition, please send the details to my email, jkcooperman@yahoo.ca. 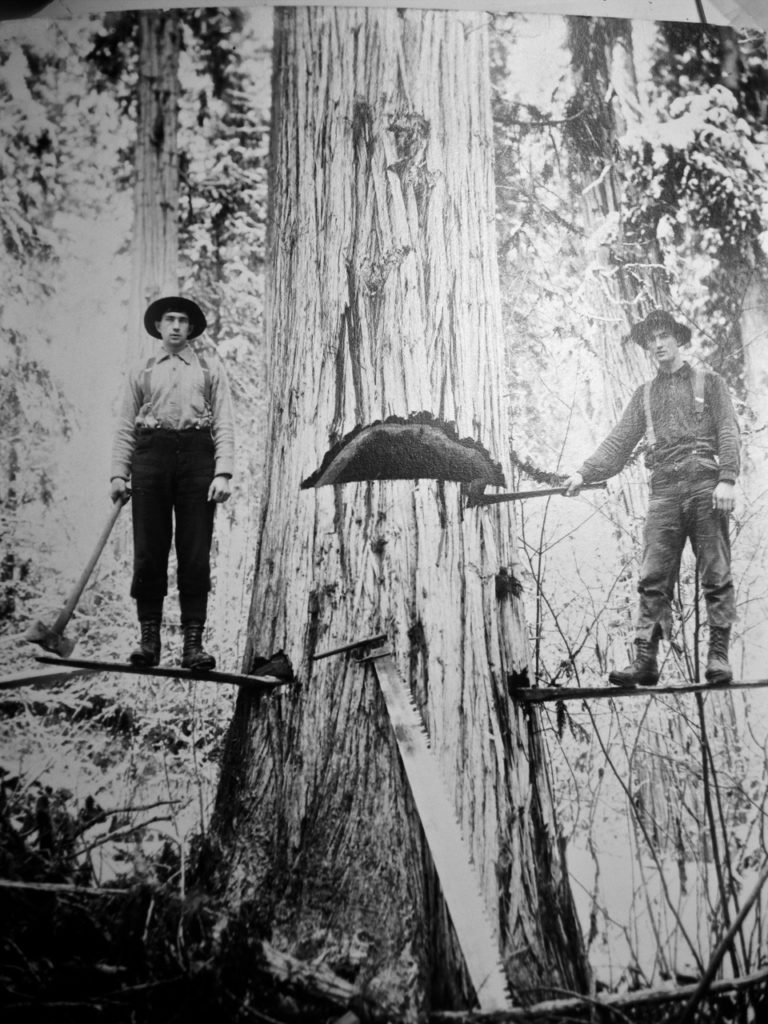 Big trees were everywhere prior to settlement. For example, the Salmon River valley was once an old growth cedar/hemlock forest. Settlers had to deal with massive stumps in order to farm the valley. Over the years, logging has removed most of the large trees and the second and third growth will never reach the size of the original forest because these trees will be logged before they are fully mature. 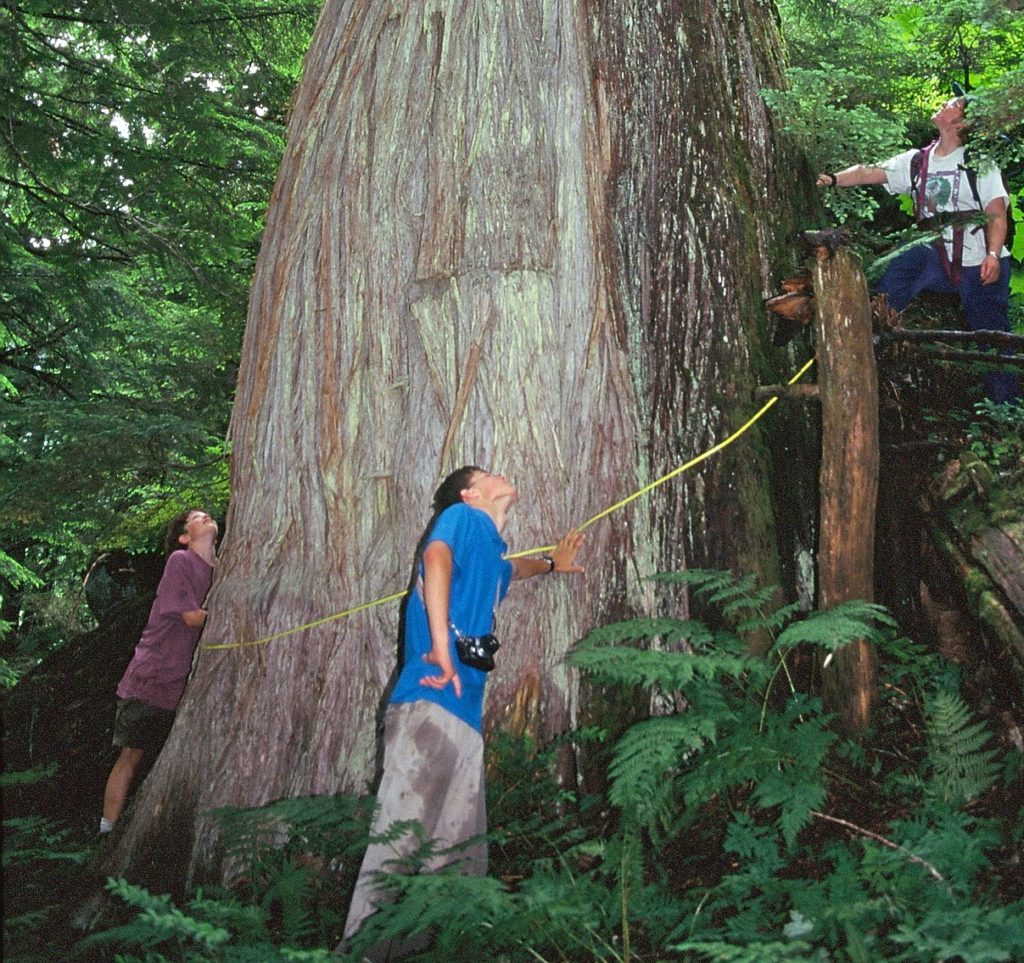 Trees identified for this project will need to be measured, which in some cases can be quite difficult as was the case with this giant cedar in the Upper Perry River protected area. A professional forester may inspect the tree, estimate its height and verify the diameter.