Located about one and half-hours east of the Adams River bridge, the 12-kilometre long Humamilt Lake is by far the best small lake in the Shuswap for paddling. We canoed the east half of the lake in 2006 and on September 21st we returned to paddle the west half and enjoy what was a warm and sunny end of summer. The diversity of the shoreline amazed us, with its towering rock bluffs, wetlands, beaver dams and lodges, and massive old growth Douglas fir trees. 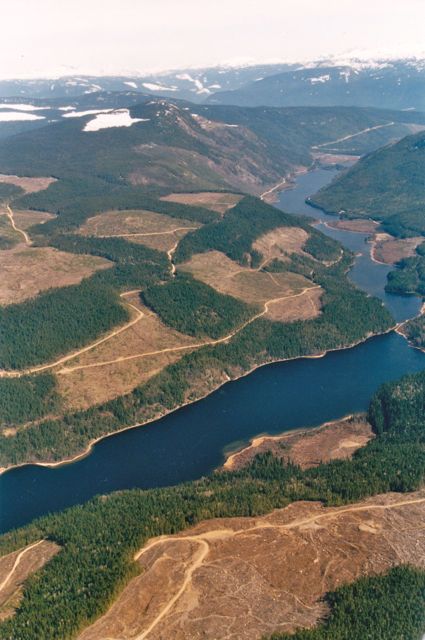 Clearcuts dominating the valley in the early 1990s
In the 1990s, this lake was the ‘poster child’ for the campaign opposing clearcut logging in the Shuswap, when aerial photos revealed a landscape scarred by logging. The clearcuts are now filled with young plantations that are slated to be logged again in 60 to 80 years. And while these young forests are green, they lack the diversity and ability to provide the wildlife habitat found in natural forests that they replaced. 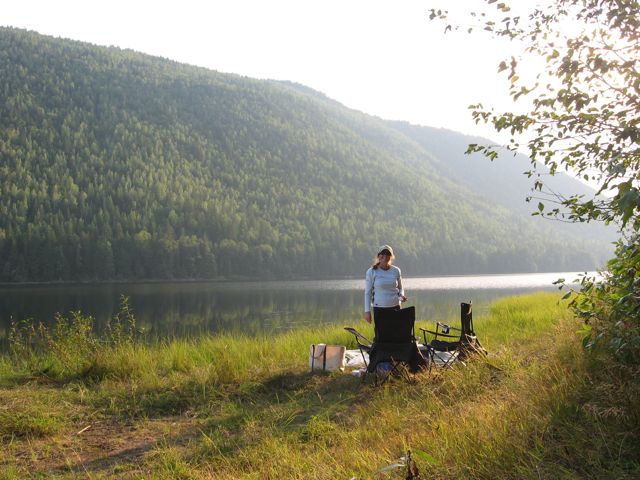 In 2006, we launched from the unofficial grassy campsite area on the north side of the lake near the outlet. The small islands at the east end of the lake are one feature that added to the paddling experience.  We glided along on the north side through the first narrow part of the lake to the centre of the lake before returning on the south side, which took us about four hours. While we enjoyed our dinner on the lakeshore, we watched a man head into the water fully clothed to pull out water lily roots, which we assumed must be some kind of nutritious delicacy. 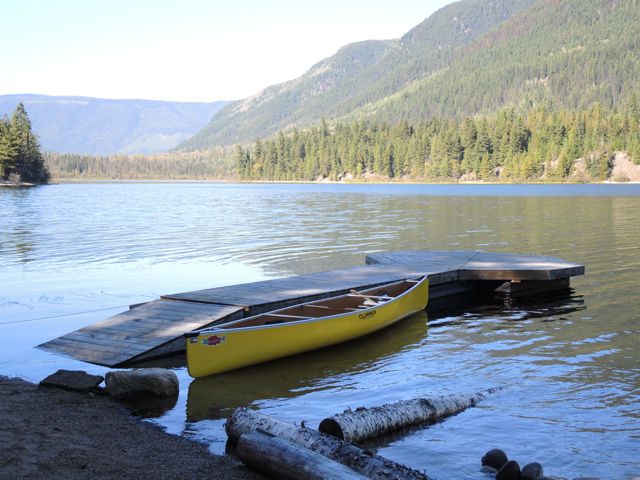 This September, we launched our canoe from a small dock at the western campsite that is well maintained by the Neskonlith and Adams Lake Indian Bands. We headed eastward to the marshy bay above which the only private land adjacent to the lake is located. This vacant property was for sale at one time for one million dollars, even though it lacks good access to the lake. 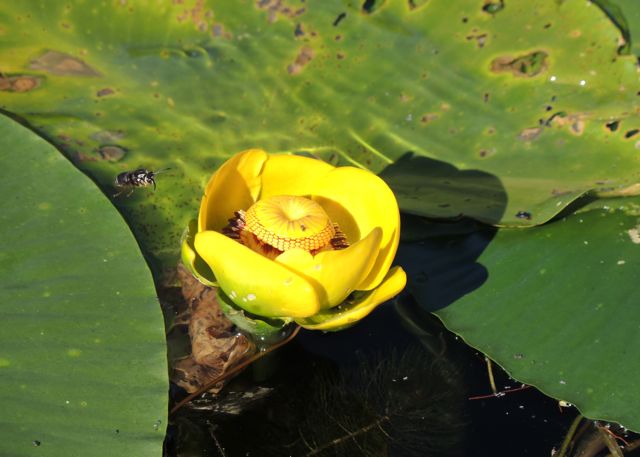 Gliding through the lilies and sedges, we became fascinated by the brilliant yellow lily blooms and kept trying to capture the perfect photo. Rounding the bay, we stopped at a point to investigate the remains of a trapper’s cabin. 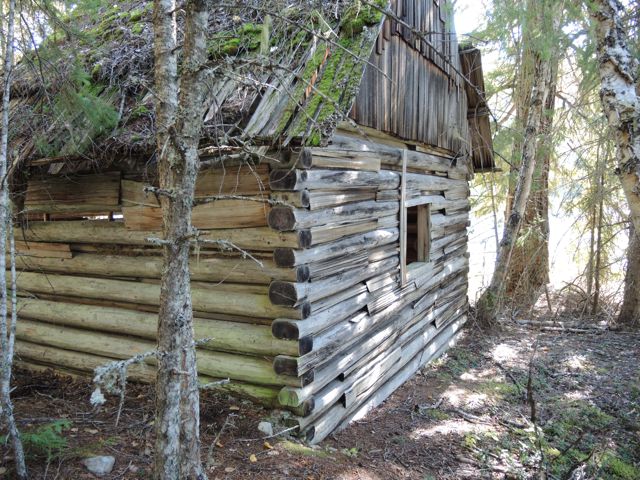 Basking in the warmth of the sunshine, we ventured in for a quick swim, thankful for the clean, clear water and sandy lake bottom. A short time later, we each noticed a speck of what appeared to be mud on our legs, which turned out to be leaches just beginning their bloodletting before we flicked them off. 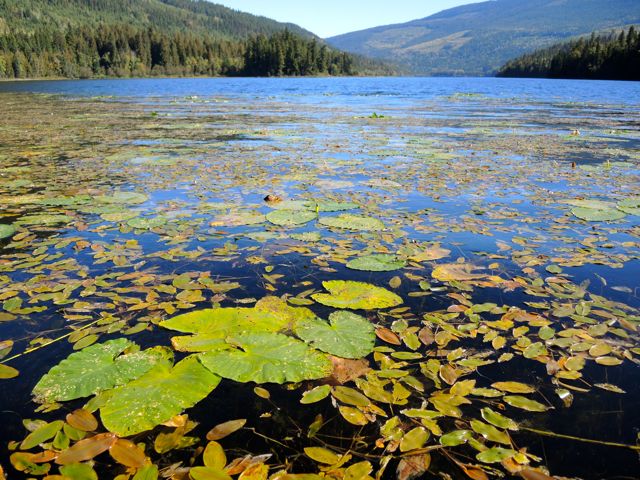 One of the highlights of the paddle was the rocky narrows, where the lake is not much wider than the length of our canoe. At its entrance, the rock bluff juts out above the water looking somewhat like the head of a whitefish, which is what Humamilt means in the Secwepemc language. Then we faced the challenge of getting through the beaver dam in the narrows. After moving a few sticks, I pulled the canoe through from the shoreline. We then mused as to whether the beavers would have the dam repaired by the time we returned! 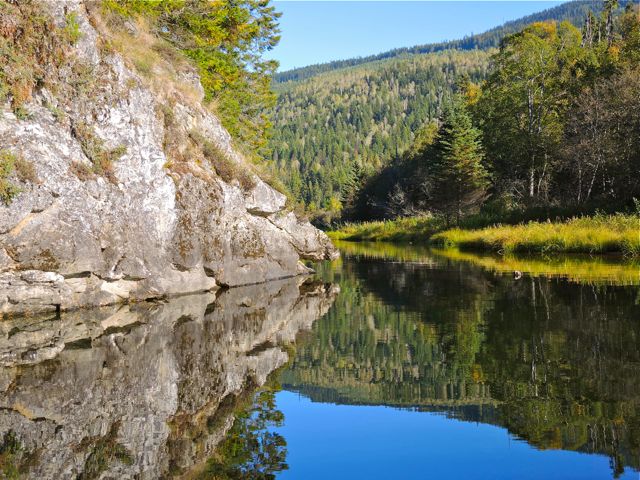 The day was serene and calm, with exquisite views of the surrounding hillsides and rocky outcrops. But we could not help but notice the many patches of dead trees, killed perhaps by either disease or lack of moisture due to the persistent droughts in recent years. Despite the lack of wind, we twice heard massive trees falling nearby on the hillsides. 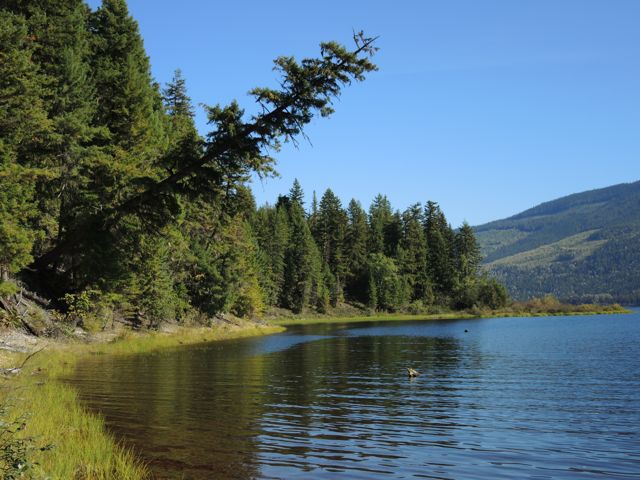 Amazingly, Humamilt Lake was likely busier nearly one hundred years ago than it is now. Three homesteaders, Al Godbout, Matt Pederson, and Karl Wallensteen all eked out a living at the lake trapping, hunting and gardening, despite the lack of roads. In those days, nearby Albas was a thriving mill town, and logs were floated down Celista Creek to just above the waterfalls, where they were transferred to a wooden flume. Later Rolf Bruhn had a logging camp and tug boat at Humamilt Lake where he took out thousands of cedar poles and lost money in the process. 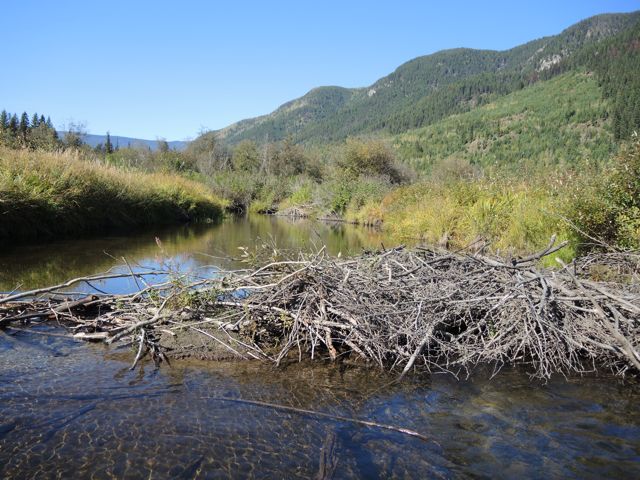 Upper Celista Creek is partially blocked by a beaver dam

One day, tourism promotion in the Shuswap will expand to include paddling, as there are so many great places to canoe and kayak. Humamilt Lake could then be part of a paddling and camping circuit that includes Adams Lake, Momich Lake, Stukemapten Lake and Shuswap Lake. And it would be refreshing to see more non-motorized recreational enthusiasts appreciate all that the Shuswap region has to offer. 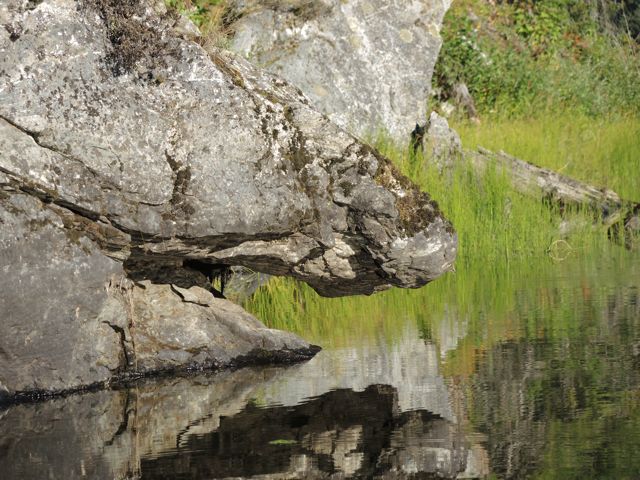 Nature’s rock sculpture near the western narrows in the lake

There are so many paddling opportunities in the Shuswap that few people are aware of and that should be promoted for responsible, sustainable tourism. Also close to Humamilt is Albas, one of the best camping spots on Shuswap Lake with its waterfalls and sandy beaches that is also a great area to paddle. A few hours to the north is the Upper Seymour River Provincial Park, that desperately needs some infrastructure improvements to allow for paddling, hiking and camping.