Fifty years ago, Shuswap’s largest protected area, Monashee Provincial Park, was established thanks to the efforts of a number of local conservationists.  Nearly 200 people celebrated the park’s anniversary on June 1st at the Cherryville Hall with an open house and exhibits followed by speakers, including BC Parks staff and local MLA Eric Foster, and a giant birthday cake. The Cherryville Historical Society, who sold commemorative posters to raise funds to promote a proposed expansion of the park, sponsored the event.

One of the highlights of the event was also a historical 70-minute film, Call of the Monahsees, about a pack trip into the area produced by local historian, Ernie Lavolette in the early 1960s. The film was recently converted to a DVD thanks to funding from an Albertan scientist, Claude Labine, who has a summer home in Cherryville. Copies of the DVD are available for purchase in Cherryville and proceeds will assist the newly formed group, Friends of Monashee Park. 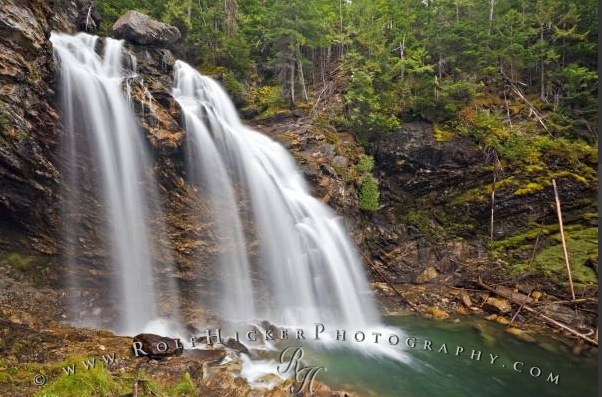 One of the highlights of the park is the majestic Rainbow Falls,

Although the park’s birthday party was a popular event, this anniversary year has been bittersweet because access to the park was cut off on June 23rd due to a massive flood that washed out the only road into the area. It was the same heavy rain on snow event that flooded Sicamous and Hummingbird Creeks. Star Creek flows out of the hills below Tsuius Mountain to the west of the park and when the heavy rain hit, the creek burst its banks and flooded both the Sugar Lake Road and the road into the park.

The main road was quickly repaired, but the damage to the road into the park was more severe. The provincial government is now working with the local logging company, Tolko to rebuild the road and the goal is to have it repaired before the end of August. However, more work is needed to ensure the creek remains within its banks the next time there is heavy precipitation. The Star Creek watershed has been heavily logged in the past, and these clearcuts increase the flow of water during spring run-off. Another problem is that the creek’s fan is unstable due to a forest fire in the 1950s and will continue to be unstable until the trees grow to maturity.

Monashee Park has a rich history, as the alpine area has been a popular destination for hiking since the early 1900s, when Bill Fraser and an unidentified companion walked across Canada and spent the winter in a hastily built log cabin at Margie Lake. That spring he journeyed on to the coast but then returned to settle at Sugar Lake where he built a 3-story cedar log lodge on a rise overlooking the lake. This was a popular pristine fishing lake where a number of prominent Vernon residents had established summer homes.

Fraser soon added a number of cabins and his lodge became important for providing pack-horse services for forest fire lookout stations and outdoor enthusiasts hiking into the alpine country and majestic mountains of the Peters Lake area, named after a lodge guest from England. Peters Lake is far above the scenic Rainbow Falls which blocks fish passage. In 1940, the Summerland Trout Hatchery delivers 8,000 fingerlings to the Fraser Lodge and the next morning Andrew Hankey delivered the fish to the lake with packhorses in record time to ensure their survival.

The exceptional recreational values of Sugar Lake abruptly ended in 1942 when a storage dam was built at Brenda Falls that raised the level of the lake by 7 metres. Since Fraser Lodge was built on high ground it continued to provide an access point for visitors into the Peters Lake area, including those who used floatplanes in the 1950s. When the bridge was built spanning the upper Shuswap River, it opened the area to logging and provided improved access for alpine hiking and fishing. Eventually the area became so popular, Bill Fraser and a number of other conservationists began lobbying the government to turn the area into a park.

Scottish surveyor Donald McIntyre has long been credited for naming the mountains the Monashees in 1881, which has always been translated from the Gaelic as “Mountains of Peace.” However, local historian and writer Don Elzer has a new theory, since mountain in Gaelic is sliabh, pronounced shleeve and peace in sith. Elzer believes that Monashee more accurately describes the mythical fairy inhabitants of the island of Mona and this theory corresponds to a movement in the late 1800s to restore the old Gaelic culture.

You can download two detailed histories of of Monashee Park at www.shuswapwatershed.ca.