Bear time in the Shuswap

Home » Bear time in the Shuswap 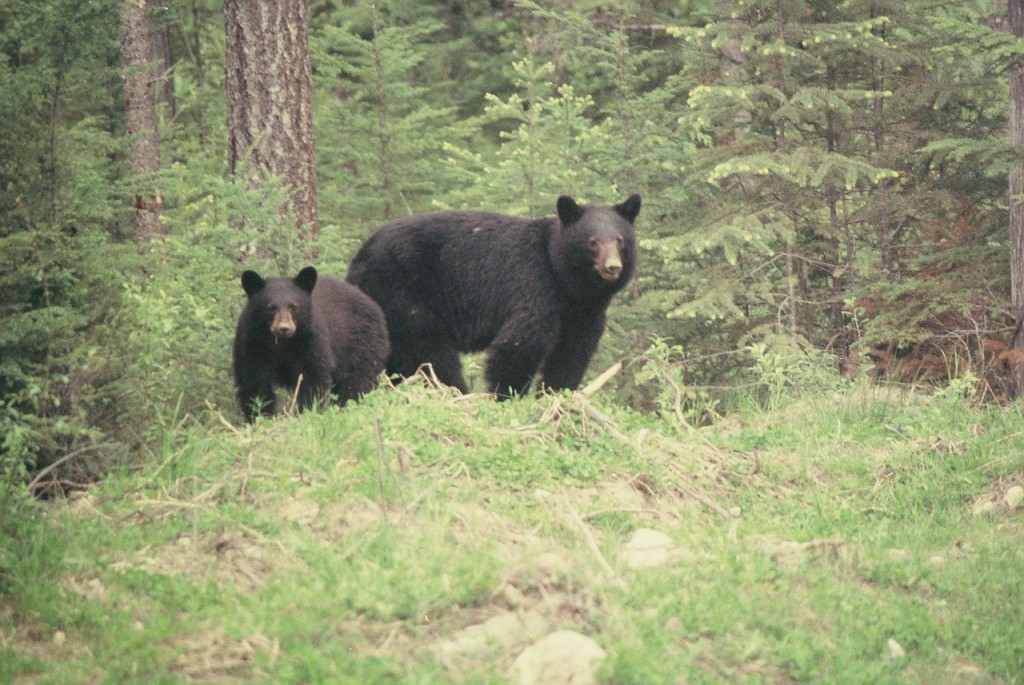 As the fruit ripens in the fall and the berries in the backcountry dry up, black bears become a regular sight in our backyards. Over the past 47 years of living in the woods above Shuswap Lake, I have had many encounters, including often chasing them out of our plum and apple trees. Only one bear ended up getting shot after it attacked a dog, and it was very old, undernourished and quite mean.

Our dogs have played a vital role in protecting our fruits and vegetables over the years. In the late 1990s, we purchased a Karelian Bear Dog pup that grew up to be a fierce garden protector along with her puppy. And now our new Karelian also works hard to convince the bears to move elsewhere. 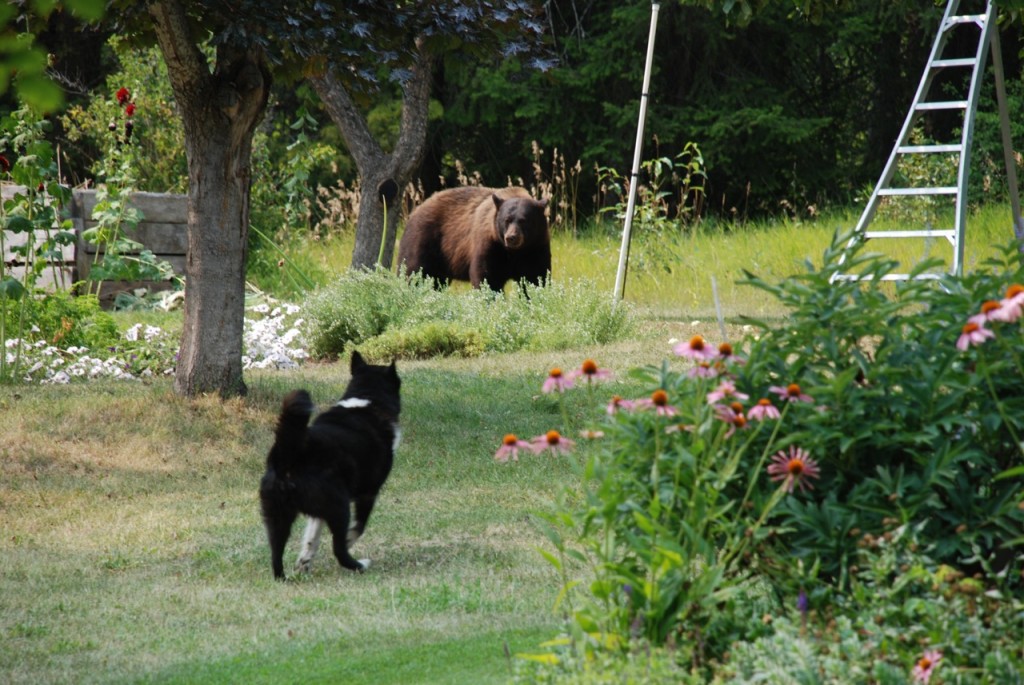 The other day I stepped outside to see a mother bear and two cubs in our driveway, so I called our trusty bear dog out from indoors where he was napping and he promptly treed them high up a large fir tree. They stayed up there for many hours, while our dog held his post under the tree. When I noticed that the cubs wanted to come down, I convinced our dog it was time for another nap inside so they could finally leave. I filmed their slow departure from the safety of our nearby old cabin and was amused by one of the cubs who was more interested in chomping on some wild apples than paying attention to its mother’s concerns. 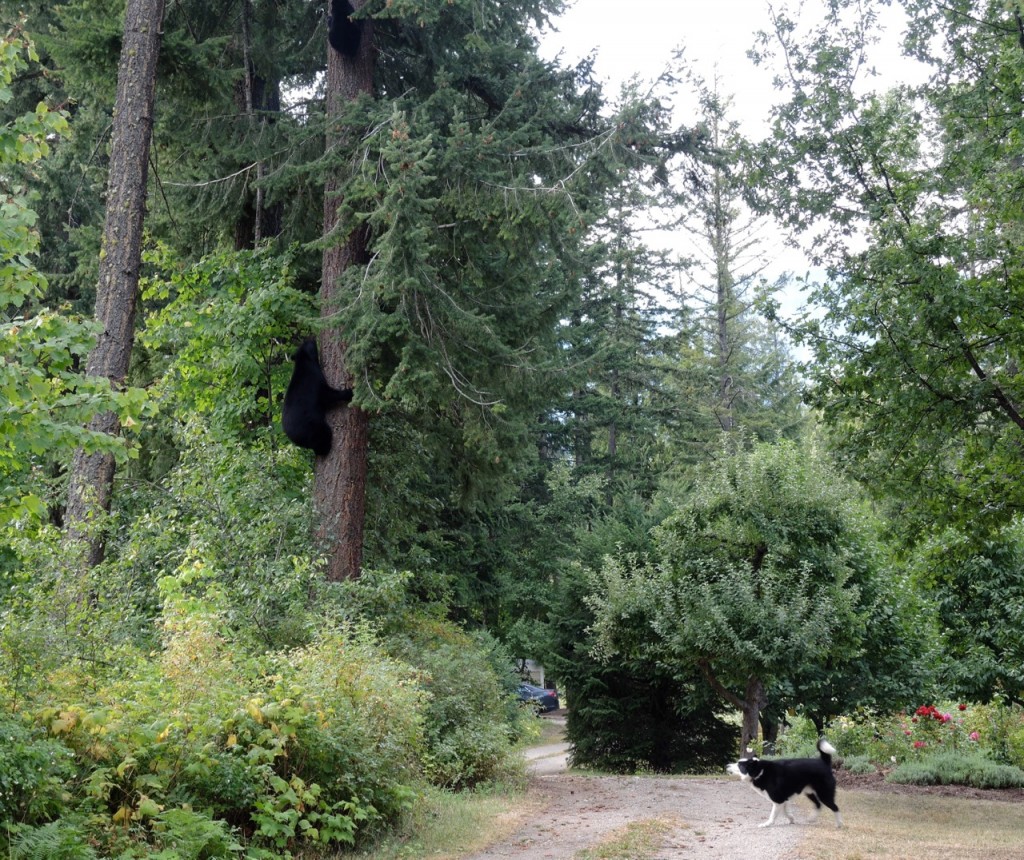 Fortunately, most black bears are more afraid of us than we are of them. But it is always wise to carry some protection when hiking, in case you happen to come between a mother and her cubs. The best device is a bear banger [see note below], which I have often deployed to help our dog chase away some stubborn bears eating fruit. Bear spray is also handy, but most of us would not want to be close enough to a bear to use it and if the wind is not blowing away from you, it could be the bear that has the last laugh. 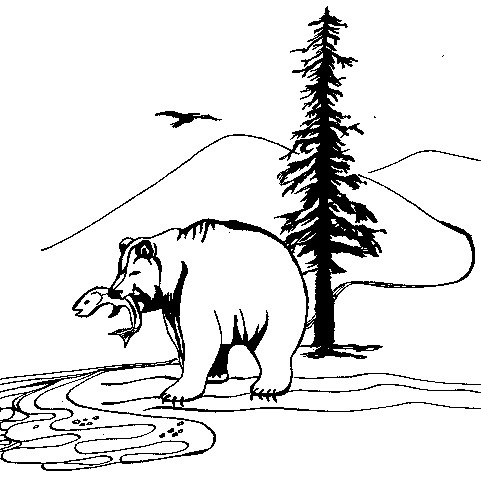 Thankfully, Salmon Arm has not had the same level of bear activity as Revelstoke, where nine bears have been euthanized recently. Hopefully, most Shuswap residents follow the guidelines developed to avoid problems, including locking up garbage, taking down bird feeders, collecting windfalls and picking fruit early, covering compost with grass clippings, cleaning the barbecue, and avoiding leaving pet food outside. 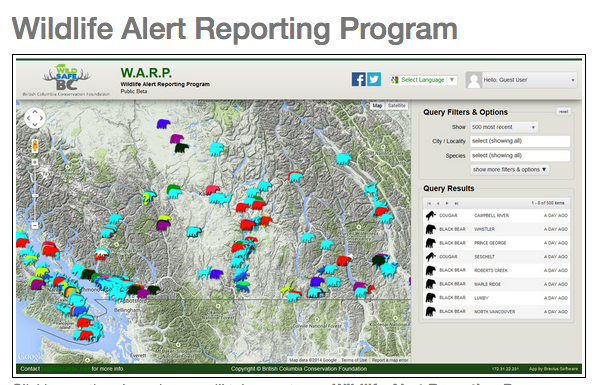 The British Columbia Conservation Foundation sponsors the critically important service, Wild Safe BC that works diligently throughout the province to reduce human-wildlife conflicts through education, innovation and cooperation from its office in Kamloops. One of it projects is the online Wildlife Alert Reporting Program, that maps daily wildlife encounters throughout the province. While the most recent map only shows just three bear sightings in Salmon Arm, it does provide the viewer a sense of how many bears are out there. 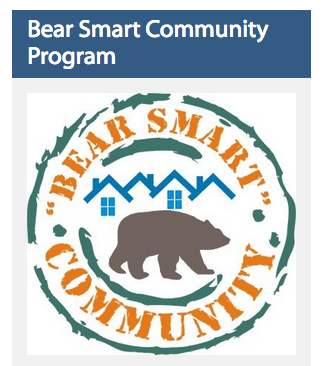 Another successful service is the Bear Smart Program operated by the BC Ministry of Environment, which encourages communities, businesses and individuals to work cooperatively to reduce human-bear conflicts. And there is much work to do, as every year hundreds of bears are destroyed due to conflicts. So far, seven communities, including nearby Kamloops, have achieved “Bear Smart” status by preparing bear hazard assessments and management plans, implementing a continuing education program, developing a bear-proof municipal solid waste system and creating “Bear Smart” bylaws that prohibit irresponsible management of attractants. 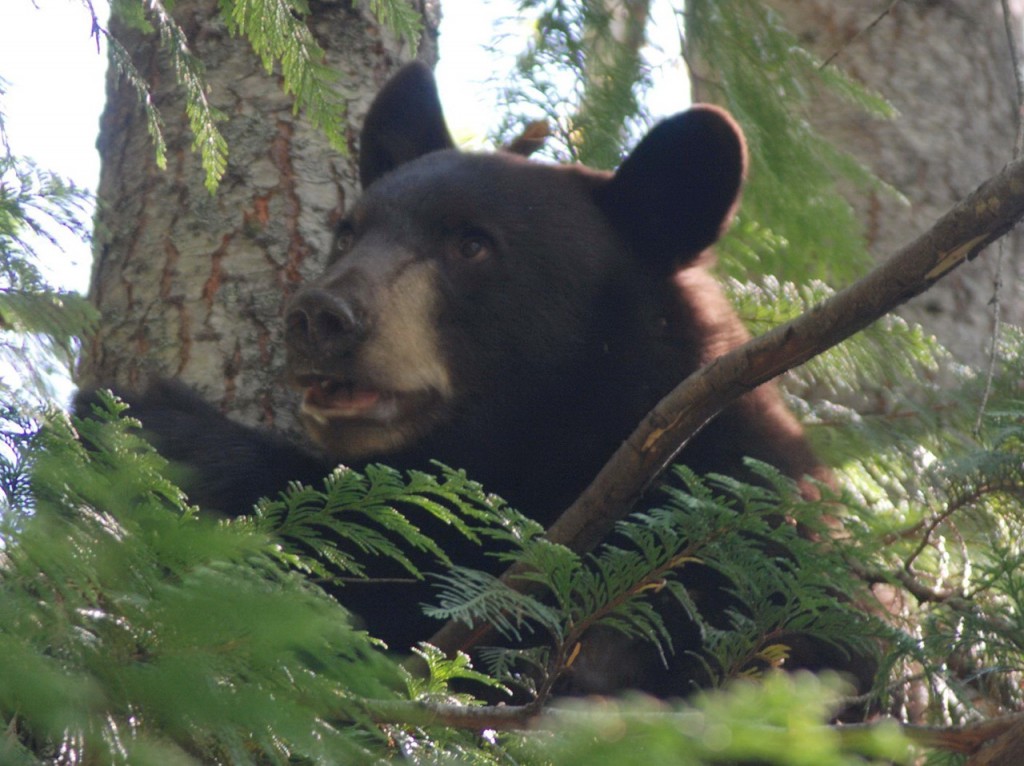 For many of us, bear sightings are one of the joys of living in British Columbia, which has one of the highest populations of black bears in the world, numbering between 120 and 150 thousand animals. A bear lifespan is usually from 15 to 20 years, but they can live up to 30 years. They dine primarily on vegetation, but they also like to feast on small animals, insects, fish and carrion. They can smell food from up to a kilometre away, so that is why it is best to avoid leaving anything outside that will attract them. And with the salmon runs so decimated, we can expect more bears in our backyards this fall than in previous years. 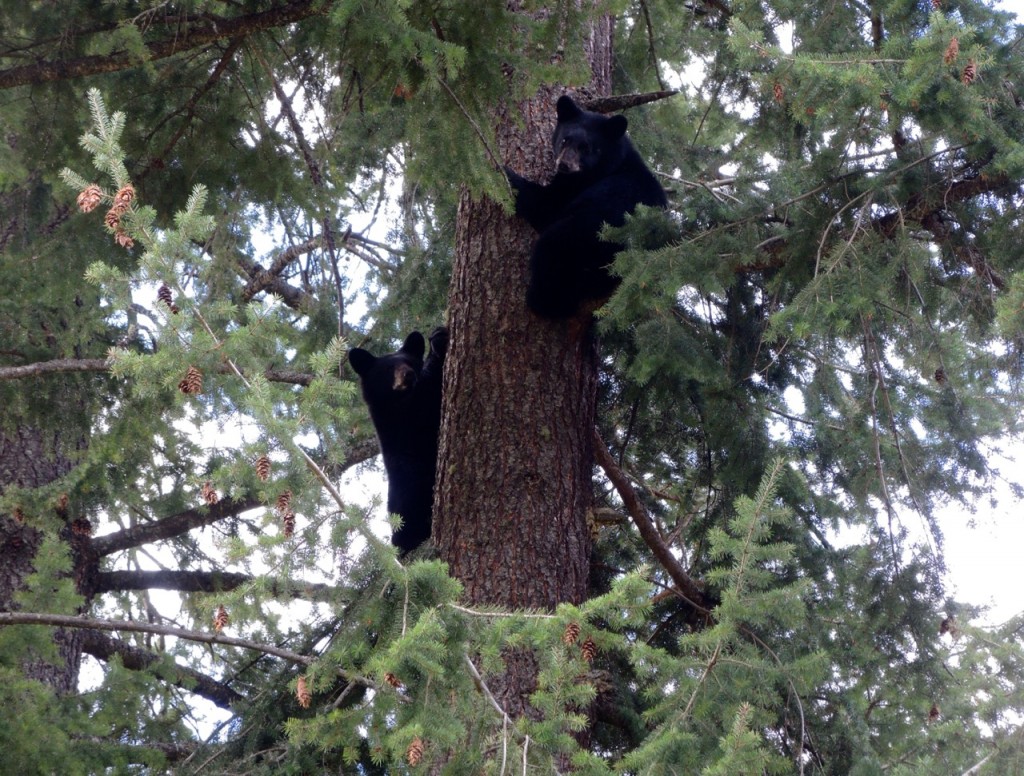 Here is the link to the video I made: Treed Bear Antics

NOTE – the experts insist that bear spray is the best deterrent when hiking. here is a link to more information: Bear Spray Basics