A look at Shuswap geology

Home » A look at Shuswap geology 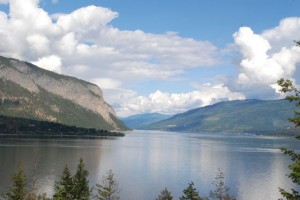 The Shuswap has a fascinating geological past, as below our feet is a section of a Precambrian craton called the Shuswap terrane, which is over two billion years old. Most of the rocks found in the Shuswap are metamorphic, including primarily schists, argillite, gneiss, and phyllite, formed from either igneous or sedimentary rock by heat and pressure. Plate tectonic processes created the mountains we see today. In addition to the mountains, these plate movements and earthquakes created folds and fault lines and many of these became distinct geological features. 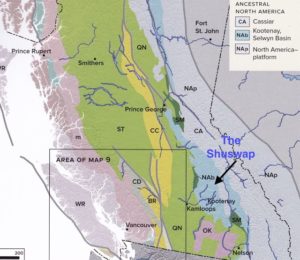 Plate tectonics lifts up parts of the earth’s crust and depresses other parts. Uplift forms plateaus, but erosion carves these into mountains and valleys. Near the Shuswap region, collision of crustal plates formed the Rocky Mountains. At the close of the mountain building period some 60 million years ago, compressive forces died away and the crust experienced extensional forces as crustal plates moved in different directions. This led to the formation of faults in what is now the Southern Rocky Mountain Trench, the Columbia River at Revelstoke, and the Okanagan Valley. The valleys formed by erosion of the crushed rocks in these fault zones.

The Columbia River Fault slopes down to the east while the Okanagan Valley Fault slopes down to the west. These faults separate upper and lower levels of the crust.  About 45 to 50 million years ago, as upper levels slid down to the east and west, the lower levels rose at least 20 kilometres, bringing the old metamorphic rocks of the Shuswap terrane to the surface. At the same time, molten volcanic rocks moved up through the crust, heated water in the crust and lubricated the fault zones. These rocks also formed numerous volcanoes at the surface. Lava flows erupted from fissures in the earth along a belt extending from the Yukon to as far south as Yellowstone. Some of the flows flanked the Monashee Mountains, which prevented the lava from flowing east of Mabel Lake.

While most of the lava has been removed from erosion, a few hills remained covered such as Mt. Ida, where volcanic rock overlays much older, igneous rock. Another example can be found in Dennison-Bonneau Park situated south of Lumby, where there are ancient hoodoos hidden in the forest. Many of these are also present in the Okanagan Valley. There is no evidence of recent volcanic activity within the Shuswap watershed but to the south of the watershed near Kelowna, there are volcanic flows as young as 700,000 years.

The final geological forces that created our unique geography were the periods of glaciation that first began about 2 million years ago, particularly the last ice age that began melting approximately 13,000 years ago. There are various theories about the cause of the advancing and melting of glaciers, including massive volcanic activity, a shift in the earth’s orbit, or changes in the sun’s activity. Prior to the melting, a vast sheet of ice and snow nearly 2 kilometres in depth covered this entire region.

After the melt there was a gigantic lake that flowed south to where the Columbia River is now due to a blockage that prevented the water from flowing west. This lake reached an elevation of 155 metres above the present level of Shuswap Lake. As a result, siltation resulted in a layer of fertile soil along the North Broadview and Glen Eden benches. The ancient spillway south created the chain of small lakes and bogs along highway 97b. When the blockage gave way, the flow moved to its current direction, to the Fraser River towards the Pacific. Sediment build-up from Fortune Creek likely also helped to reverse the flow.

Most of our rivers and creeks follow ancient fault lines, and that is why creeks that enter rivers from different directions often match each other, indicating smaller fault lines that cross perpendicular to the larger river faults. Glacier melt water was channeled into these faults, carving off the softer material, thus cutting the canyons found today.

The ice sheet melted and the glacial waters filled many Shuswap valleys and deposited the loose till material, including the soils, sands, gravels, rocks and boulders that cover the valley bottoms and hillsides. However, the Shuswap’s large deep, narrow lakes are remnants of ancient faults and were still filled with giant fingers of ice, which prevented the glacial melt from filling them with sediment.

At the outlet of nearly every creek and river is a fan of sediment laid down over thousands of years and this process continues every time there is a major erosion event after bouts of heavy rains atop melting snow. The fan created by the Eagle River covered a portion of Shuswap Lake forming the Sicamous Channel and Mara Lake. And the Adams River fan formed the Little River and the Little Shuswap Lake.