Musical reviews by and for the community

Home » Musical reviews by and for the community 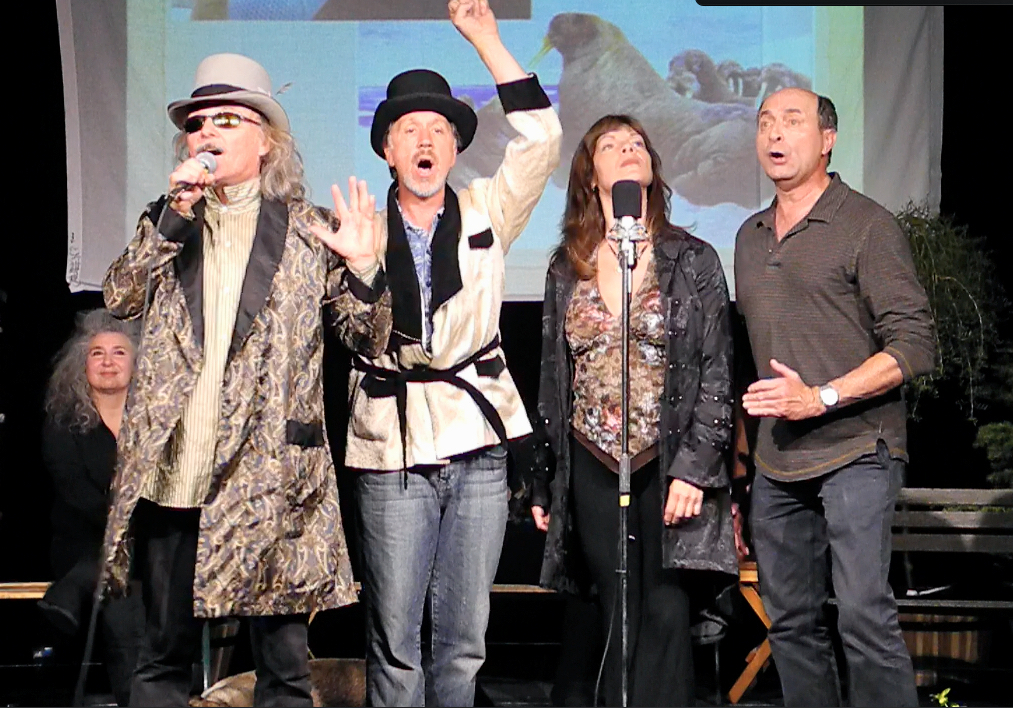 Lorn McCausland, Randy Arzenault, Elaine Holmes and Fred Green belt out a song for the Everything Animals show in 2016 (Shan Saatchi in background)

Rehearsals are in full swing for Wildwood Production’s musical show, the seventh in its series. This year’s event features the music of one of America’s favourite singer-songwriters, Pete Seeger, with all proceeds going to support the proposed multi-functional Shuswap Performing Arts and Cultural Centre. Since the first production in 2012 dedicated to the centennial of famed folk artist Woody Guthrie, this ad-hoc group of dedicated volunteers has raised over $16,000 for worthwhile local community causes. 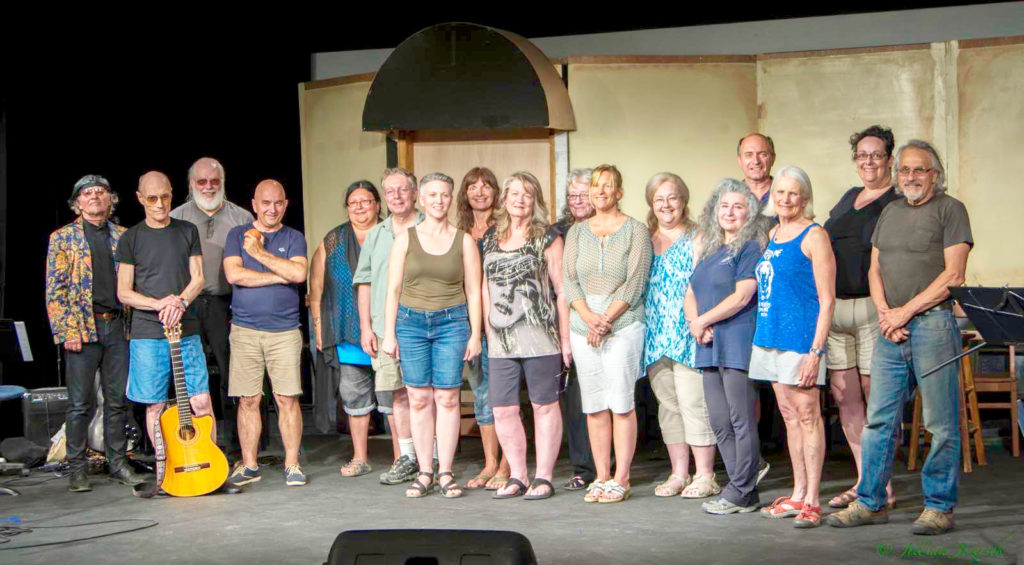 Cast of the Joni Mitchell Show in 2018

Every community has its visionaries, people who think outside the box and use their creative energies to make a difference by initiating unique projects that improve the lives of many. Jake Jacobson is one of those people who, for the past 50 years have contributed greatly to the arts and culture in the community in addition to his work as a firefighter, fire fighting instructor and many years ago his effort to open the first natural food store and the original Recycling Depot. 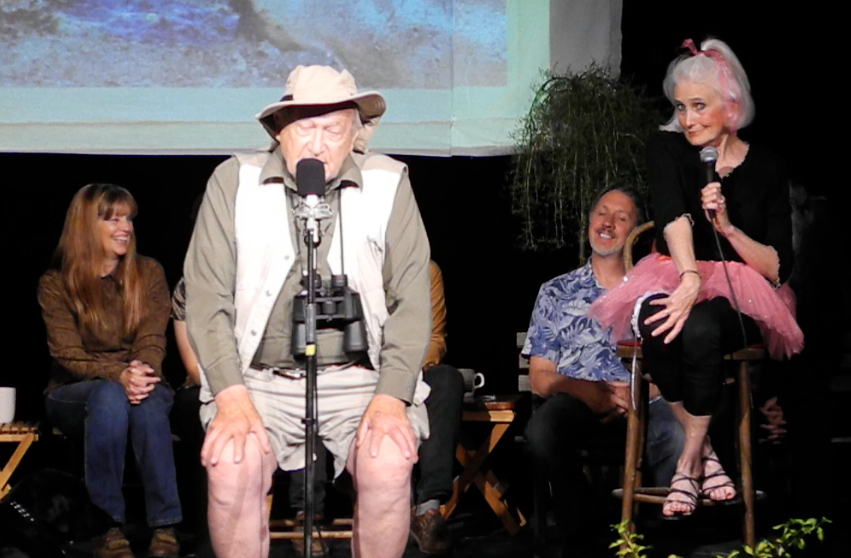 Heather Sawyer, Tom Brighouse, Randy Arsenault and Marci Beckner in the Anything Animals show in 2016

After Jake brought together many of his musical friends to produce the Woody Guthrie show that raised $1600 for the local food banks, the group realized these shows should be a yearly event. Some 30 people are involved in each production. The shows consist of songs that are picked by the performers around a theme. There are no auditions or a stage director, as the performers coach each other and the shows develop organically. One of the highlights is when the audience sings along to some of the songs.

The shows attract performers from throughout the Shuswap and from as far away as Armstrong. Audiences are always most appreciative given that for every one of the 21 shows to date, there has been a standing ovation. Another unique aspect of these productions is the ticket price, which is ‘pay what you can afford’.  As Jake explains, “music belongs to everyone and no one should be excluded because of the price of a ticket.”

A key part of these musical productions is the music itself, as every show includes local musicians. One or more of the experienced members provides musical direction to ensure the production has the best sound quality possible. 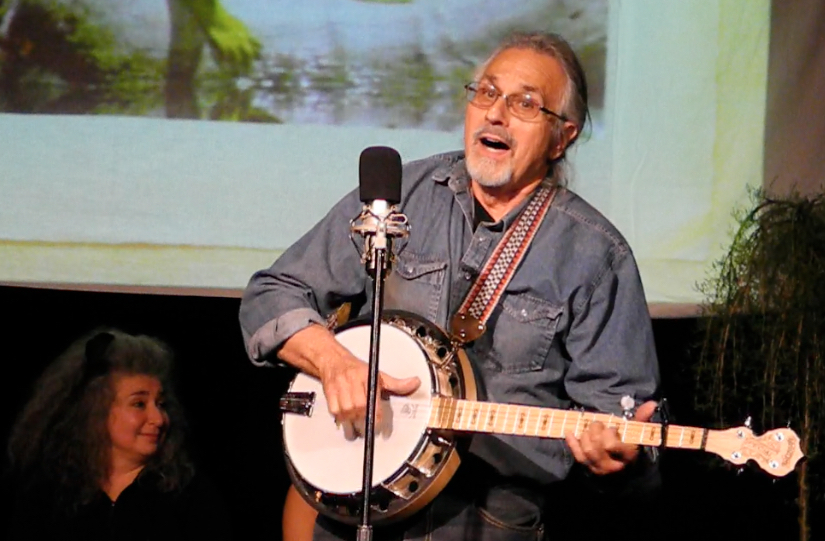 When asked if perhaps one day the group might take on more, Jake shared his concept of a potential musical that the group could write and perform. Many years ago, before European settlers invaded Hawaii, Canadian geese landed there and took up residence. Thus, Canada could have a claim to the islands and perhaps Hawaii could be persuaded to switch allegiances, especially given the current political problems facing the U.S. now. It is a fun dream and could make for an enjoyable musical. 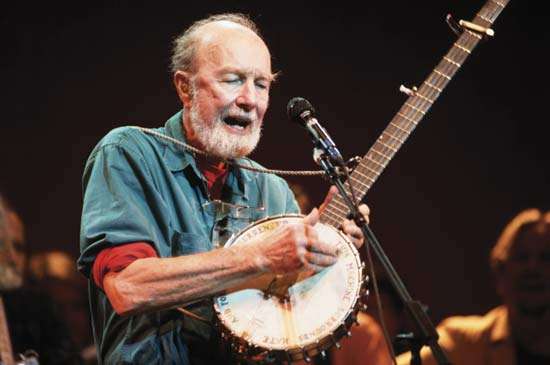 Mark your calendars for March 22, 23 & 24 to enjoy some of the finest music the Shuswap has to offer and sing along to “Where Have All the Flowers Gone”, “We Shall Overcome” and many other songs Pete Seeger sang. Wildwood Productions will provide a wonderful musical smorgasbord to tempt your cultural palate and help raise funds for our community.

Here is the Producer’s Note for the upcoming Pete Seeger show:

This is our seventh benefit concert. It all started in 2012 when I just had to do something to celebrate the centennial of one of my folk heroes, Woody Guthrie. Today I get to celebrate the centennial of my other folk hero, Pete Seeger. Pete has always been a shining example of someone who not only believed in social justice, he lived it every day. Using music as his weapon of mass distribution, he spread the word of peace, justice and equality the world over. It is with great pride I get to honour this incredible person and help keep his memory alive through his message and his music.

My thanks to all the wonderful people who helped make this fundraiser come together. This is a perfect example of community theatre with folks coming from all parts of the Shuswap to share their talents and time for a worthy cause.

About the Show:
Shows are usually scripted and the music scored. Auditions are held, a cast is selected, and weeks are spent at rehearsals. We chose not to go the easy way and started with no auditions, a few songs and no idea on how it would come together. The cast created what you see on stage. Some ideas were used and some were not. Cast members were encouraged to perform the song they selected the way they wanted to and the band adapted to their needs.

If you would like to get involved with any of the future concert productions, contact any of the cast members. We hope you enjoy the show as much as we have enjoyed creating it, and thank you for your support.