The transformative, gateway community of Sicamous 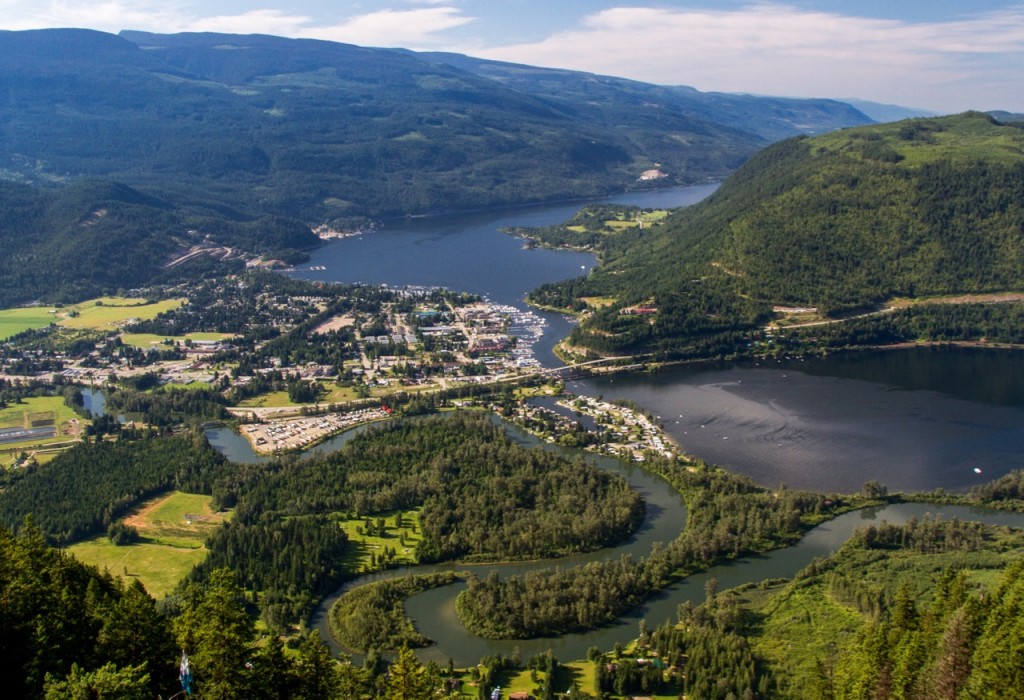 At the eastern gateway to the Shuswap is the municipality of Sicamous, a transformative community that is poised to re-invent itself again. Its unusual name is a derivation of the Secwepemc word “Shick-a-mows” meaning  “squeezed in the middle.” The early surveyor and explorer Walter Moberly first used the written word on his 1866 map of the region to describe the narrows between Shuswap and Mara Lakes. 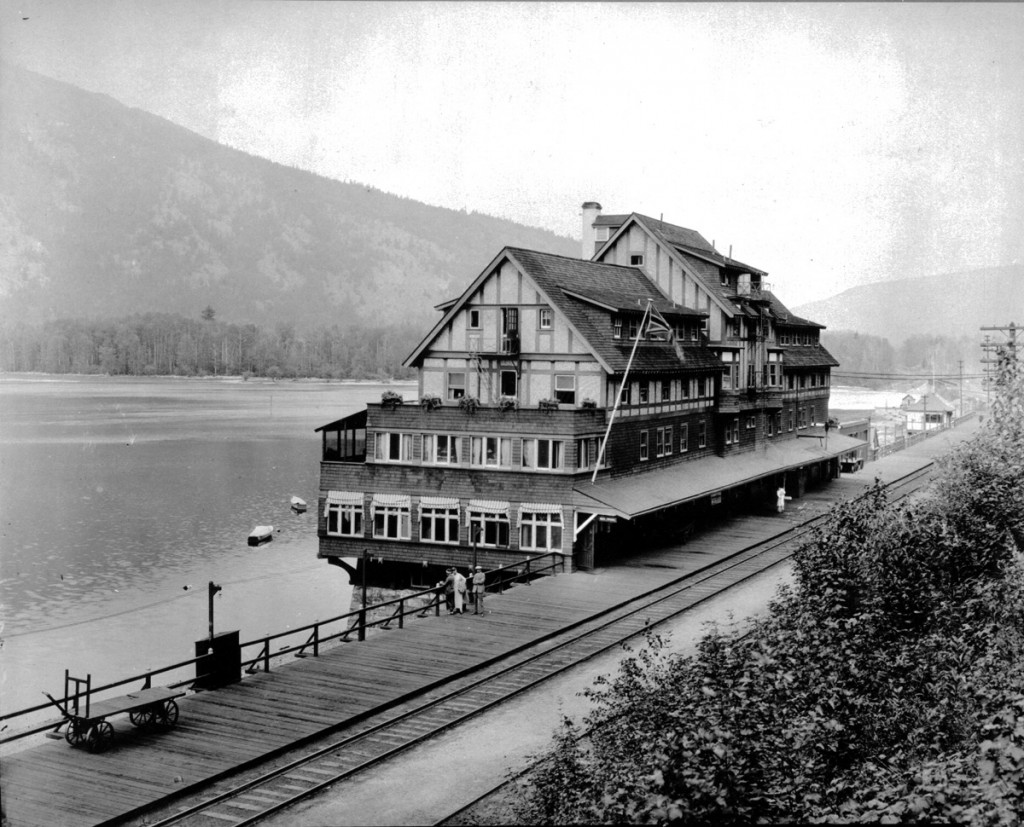 Sicamous began as a railway town, when the community moved to the south side of the Eagle River from the region’s first European settlement at Old Town Bay. Until the first vehicle bridge was built in 1948, most people lived adjacent to the grand CPR hotel and train station on the west side of the channel. As the railway modernized and shed workers, Sicamous transformed into a forestry town, with many men employed at local mills and at the Bruhn pole yard. 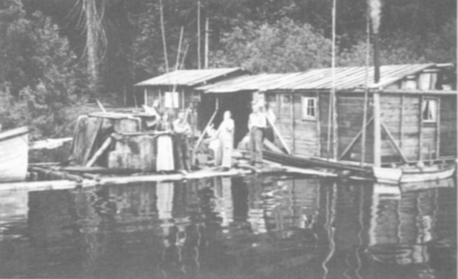 It was Sicamous’ unique location adjacent to the Narrows that encouraged the next transition for the community from forestry to tourism. The first houseboats were cabins built on log rafts and were used by a variety of people to live inexpensively on the lake. The first houseboat rental businesses began in Blind Bay and Enderby in 1962, but by late 1968 Sicamous became the centre for this growing business when Twin Anchors Enterprises set up a manufacturing plant and Waterways Houseboats began. 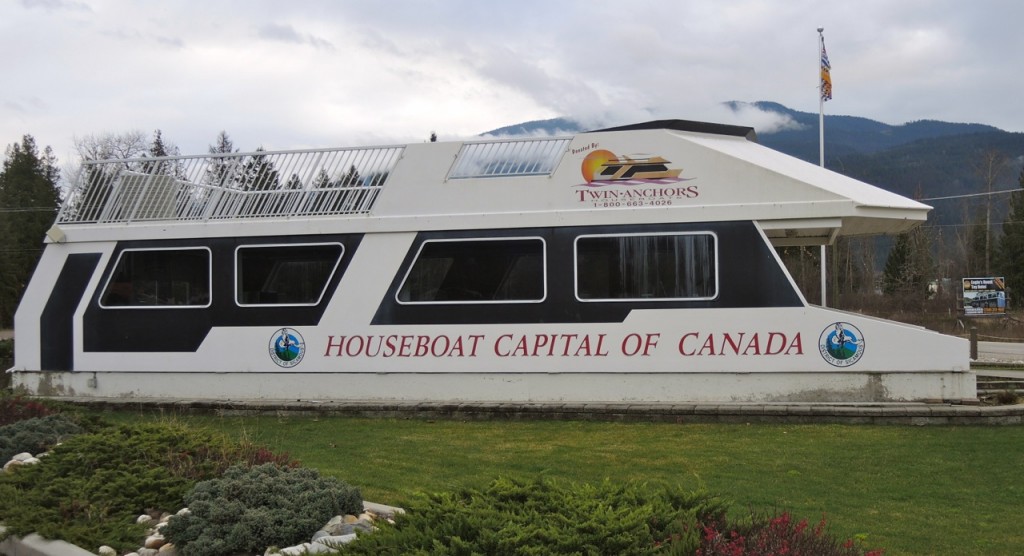 In 1969, the newly formed Rental Houseboat Owners Association proclaimed Sicamous as “The Houseboating Capital of Canada” and within two years its reputation had spread throughout North America. The creation of the Shuswap Lake Marine Park system in 1980 further boosted the houseboat industry with 14 managed sites around the lake that were ideal for mooring boats. Since then 10 additional sites have been added.

As the local tourism sector boomed, the community grew rapidly and in 1989 Sicamous was incorporated as a municipality. The community soon invested its new tax revenues into much needed infrastructure, including a sewer system and improvements to roads, parks, the water system and the recreation centre, where many young hockey players honed their skills including 15 players who made it into the NHL. 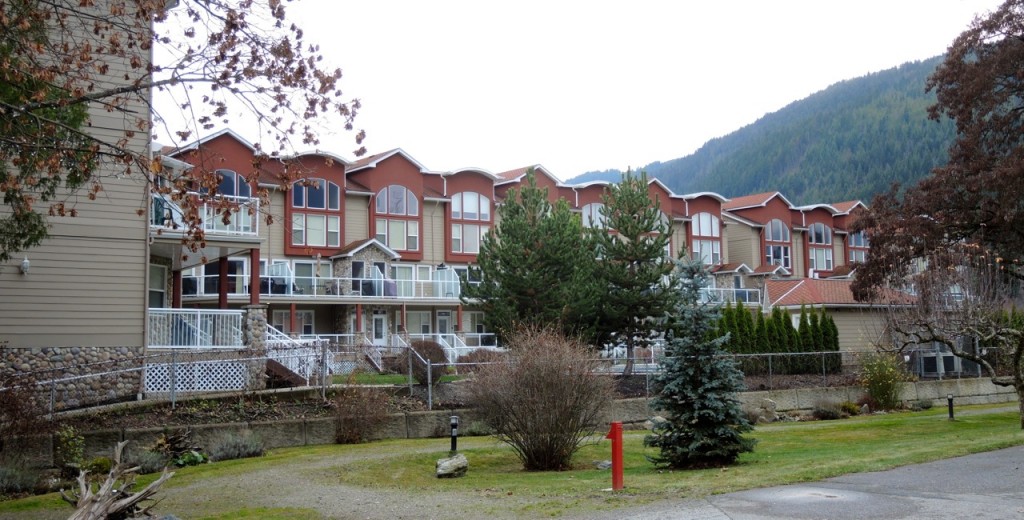 Building its reputation for its lake-based tourism, Sicamous transformed over the last two decades to become the condo capital of the Shuswap. Buoyed by increasing oil and gas revenues, many Albertans who visit here every summer purchased the new condos for their summer holidays. The houseboat manufacturing business also took advantage of the oil boom to diversify their operations to build portable housing for the oil patch. 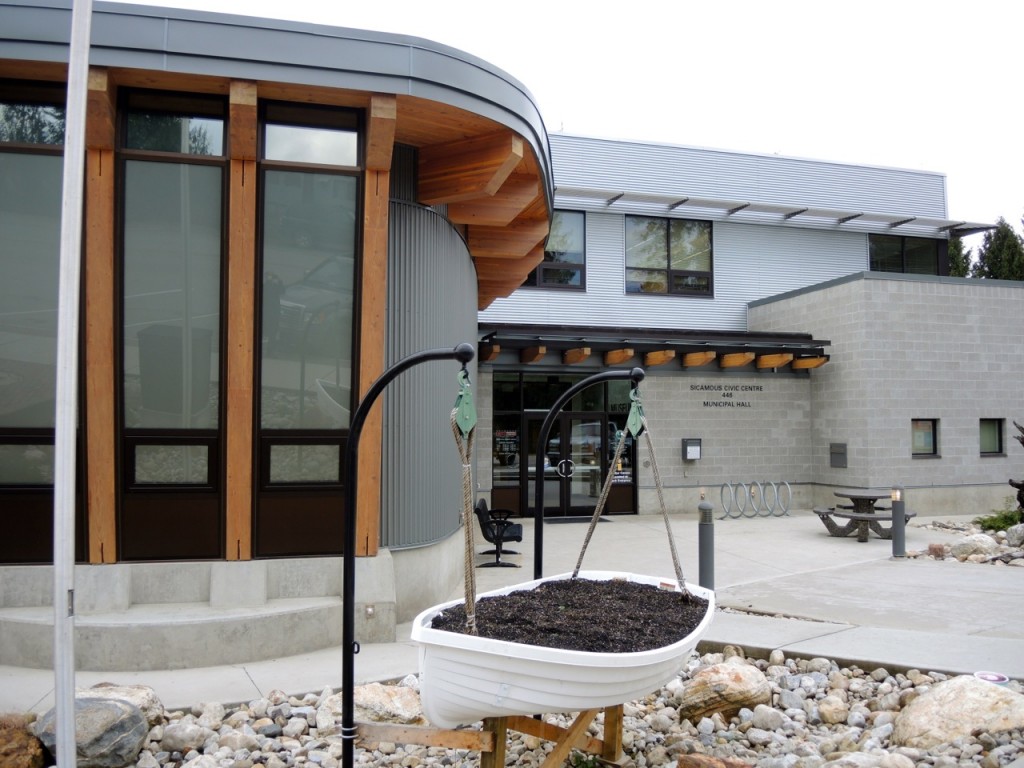 With the downturn in the oil patch, Sicamous felt the pinch, but nonetheless it continued to move forward by building a much-needed municipal office building that includes a library and a much-appreciated museum. And the community is paying close attention to demographics, as it moves to improve its services for seniors, including upgrading the town’s large network of greenway trails with signage designed by the Shuswap Trail Alliance. 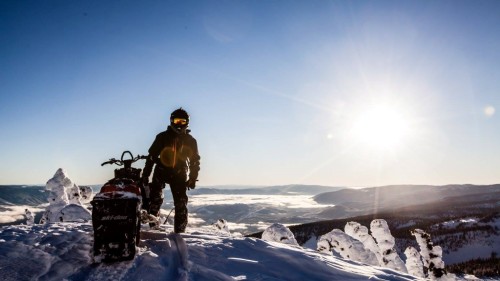 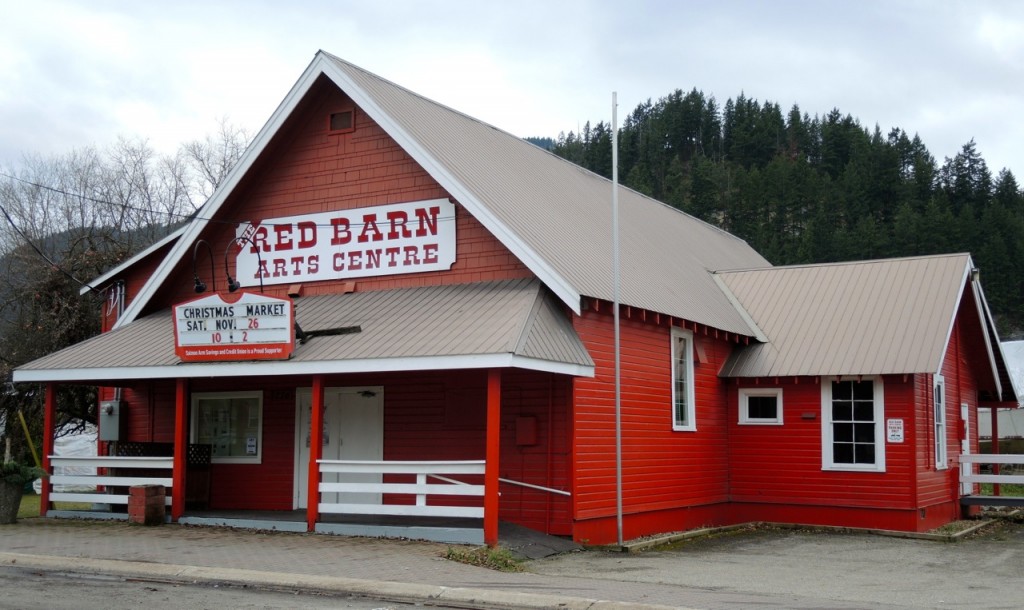 In addition to enjoying the lake, there is much to see and do in Sicamous, which has become the hub for biking and hiking trails, as well as river and lake paddling. Popular routes include the old highway trail west along the lake, the nature trails near the mouth of the Eagle River, Sicamous Creek Falls, and the new Abbott Walkway in Old Town Bay. Culture is also well represented by the Eagle Valley Arts Council, which operates the Red Barn that has served the community well since it was built as a community hall in the late 1920s. 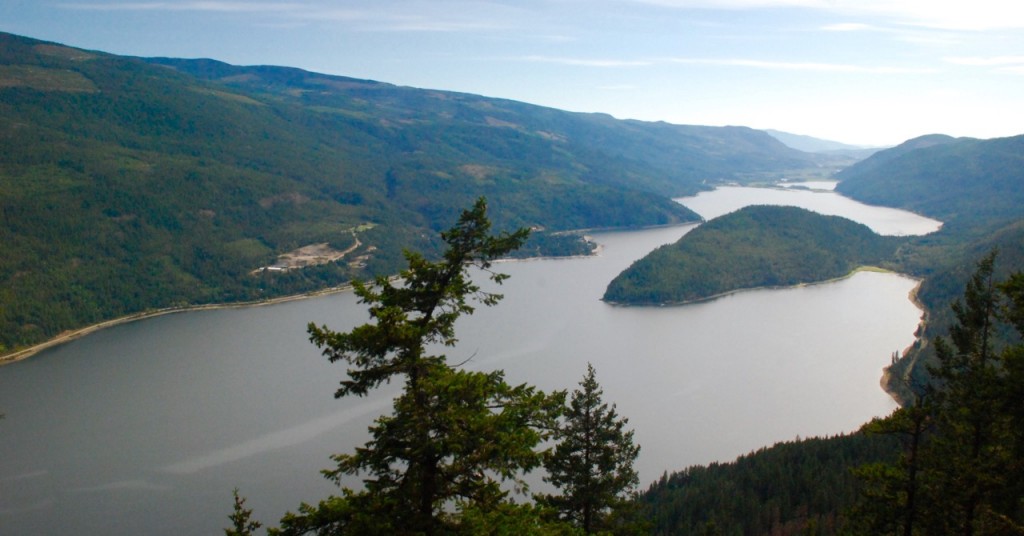 The future is looking brighter for Sicamous, with plans underway for one or perhaps two new bridges over the channel and the prospect of the community becoming the trailhead for the proposed rail trail along Mara Lake that will link to the trail now being built along Okanagan Lake. And the community has begun a process to develop a new brand identity and communication strategy, one that will likely mesh with its growing reputation as a destination for all types of recreation. 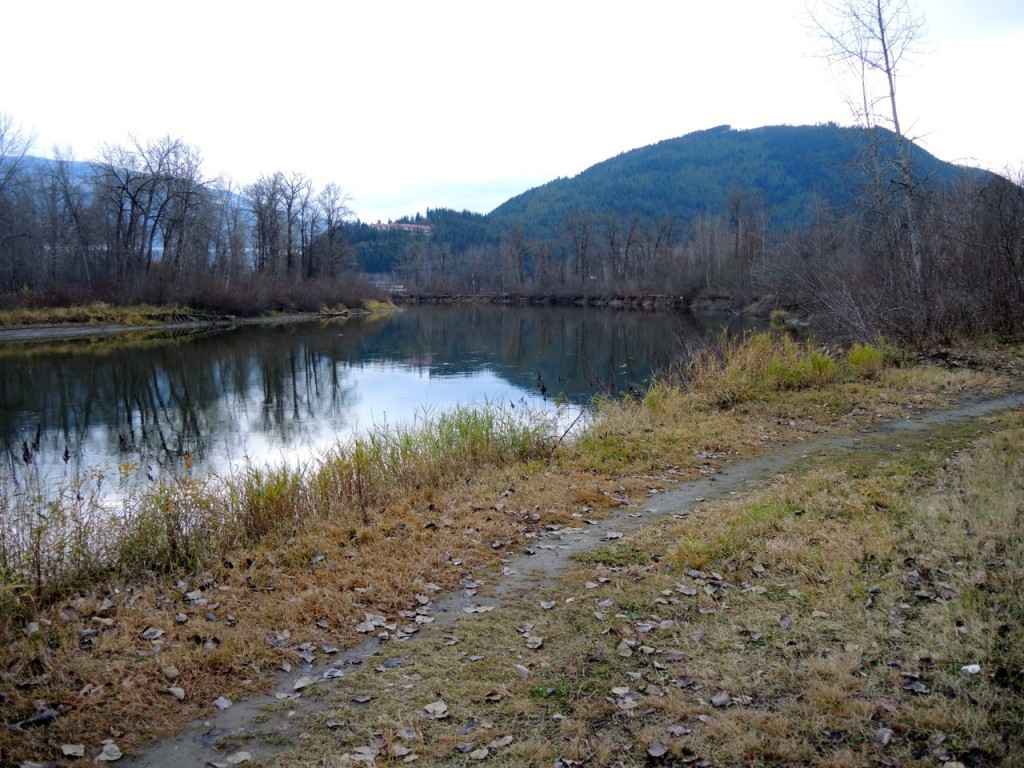 Three was not room in the column to describe all the attributes of Sicamous. After I wrote the column I drove to Sicamous to bike on some of the trails I had never been on. The old Sicamous Highway would be great to ride a bike on, but it is not too interesting of a hiking trail, as it is like an old logging road perched above the lake. The River Front Nature Park is a delightful route within a loop of the Eagle River. It is a old road that only take minutes to bike, but has wonderful views of the river. One day there may be a walking bridge to connect to Old Town Bay. My favourite route was along the lake from Old Town Bay to the point, however at the end there is private land, which should be avoided during the summer. 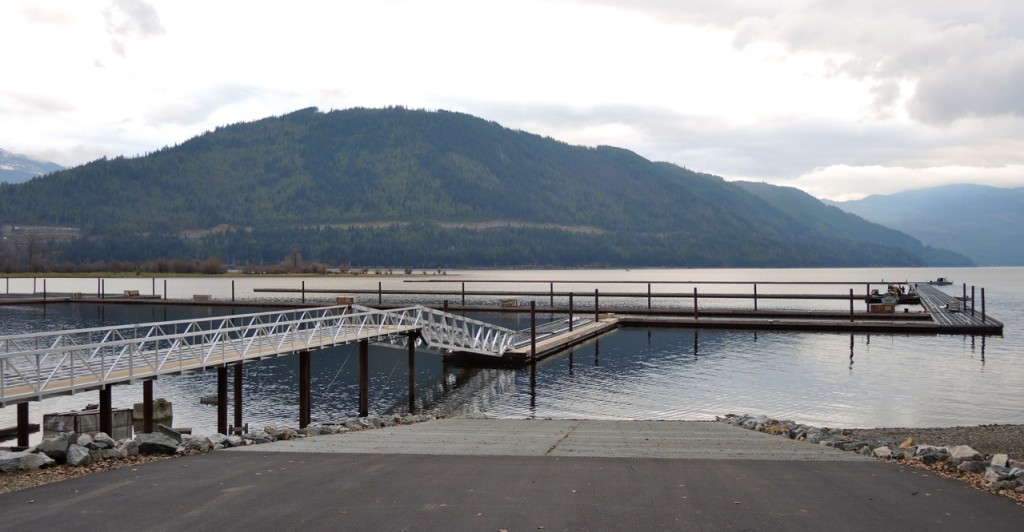 The new marina and boat launch in Old Town Bay

Former MLA, cabinet minister and CSRD chair, George Abbott and his family donated s34 acres on the hillside to the community for a park. It is quite steep, but there may be an opportunity for a trail. The road to Old Town Bay is now paved and open to the public. Alongside the road is a paved sidewalk, named Abbott Way in honour of the family who lived close by for decades. A massive marina is nearly completed in Old Town Bay that includes a public boat launch, and boats will be able to tie up to a dock after launching, which is not possible in the channel boat launch. 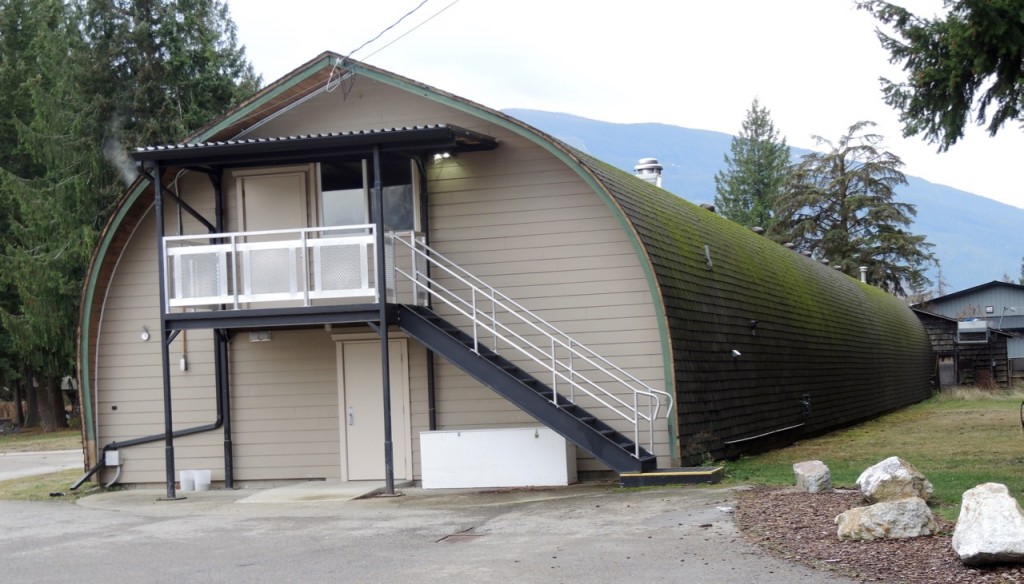 Another recreation option in the community are the two golf courses, including Hyde Mountain with it incredible views high above Mara Lake. There is also a popular curling club in town. The Seniors Centre is also a busy, popular venue for many activities. One opportunity missing in the community is a public campground. The town would like to build one, as there is plenty of demand for camping in the summer, but the only available property they have available is ALR land and the Agricultural Land Commission will not allow camping on the property. 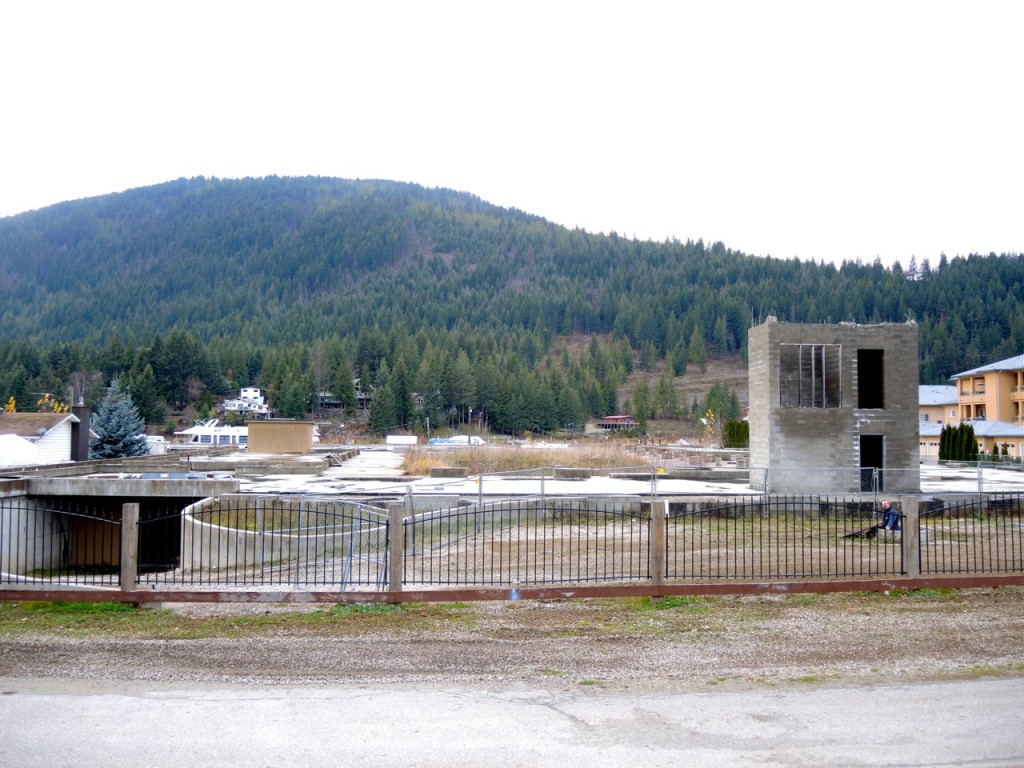 Construction of this condo building began too late to cash in on the demand. There was two stories framed that had to be torn down due to fire concerns. One of many dreams dashed due in part to the 2008 recession and the current oil patch crunch that has resulted in a lack of interest in recreational properties.