The North Shuswap, like many other areas of the Shuswap, has seen major changes since settlement, as the economic base has shifted from agriculture to forestry to tourism and retirement. At its gateway is the small community of Lee Creek, which is known best for Roderick Haig-Brown Park and the Adams River salmon run. Since its one-room school closed in 1954, the population of Lee Creek languished until a few small subdivisions were built in the 1970s. Now that Lee Creek is officially a secondary settlement, it may continue to grow as a summer destination primarily with new recreational vehicle lots and homes. 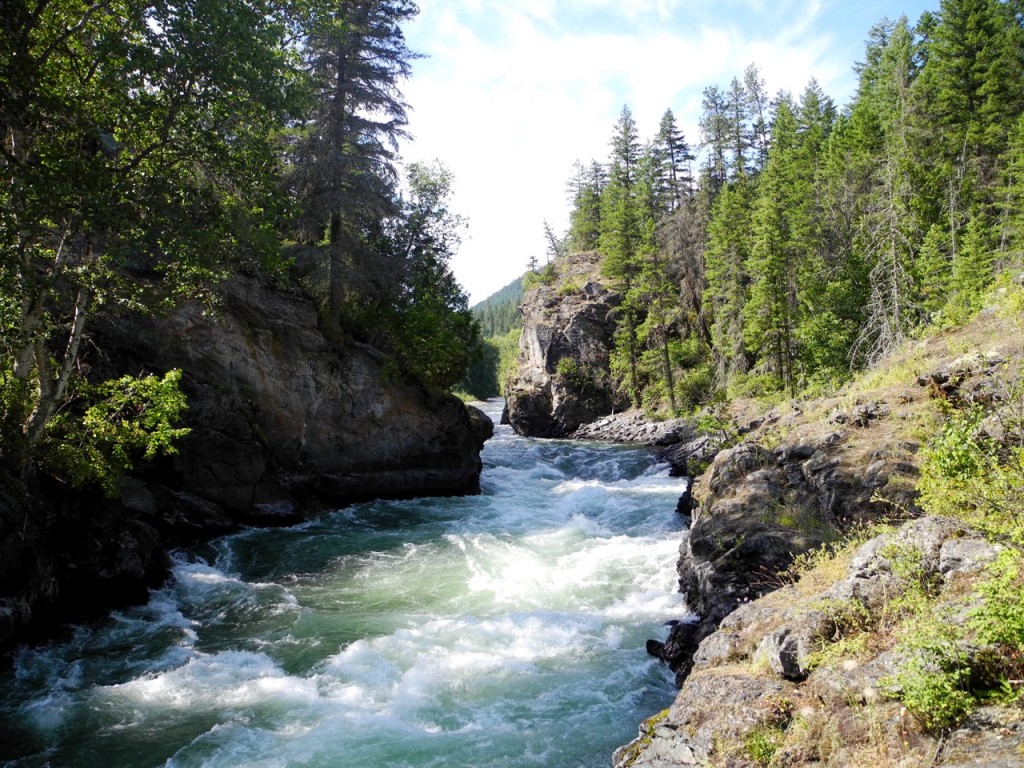 The number of outdoor enthusiasts who visit Roderick Haig-Brown Provincial Park continues to increase each year. The park’s extensive network of trails is ideal for hiking, biking, wildlife viewing, and in the winter, snowshoeing and cross-country skiing. One key scenic feature is the Adams River Gorge, which is also a favourite for kayakers and rafters. 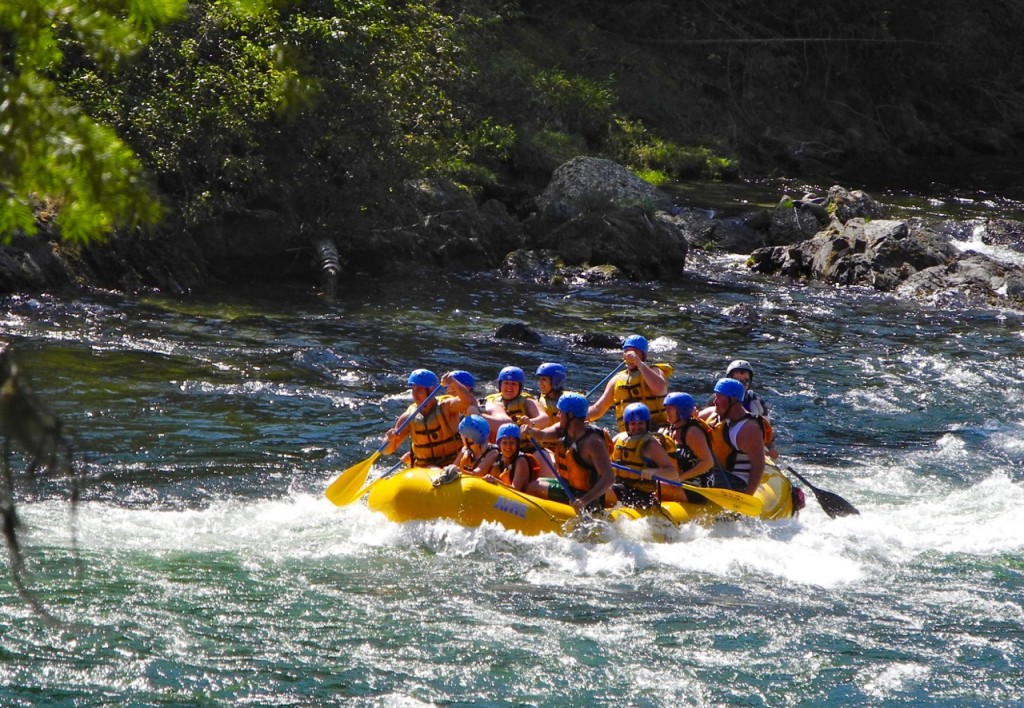 Rafting on the Adams River is a popular tourist attraction

If you pay attention to the sign at the bridge over Corning Creek, you will see the name Lee Creek is in parenthesis, as the creek has both an official name and a commonly used name. 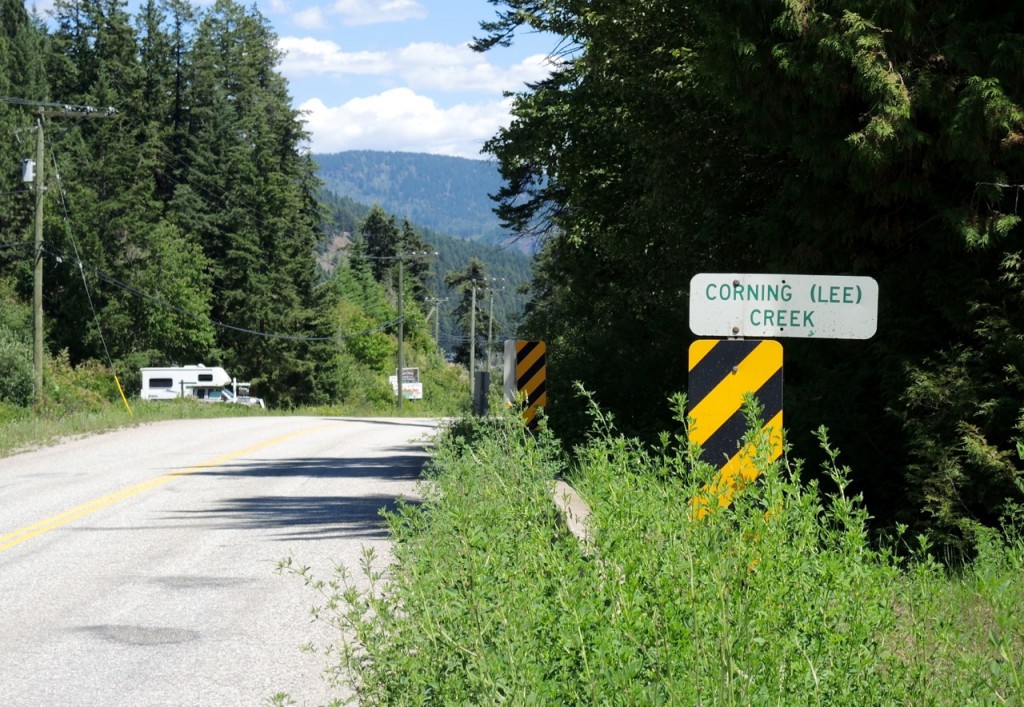 Back in March 1886, the Kamloops Sentinel reported on the Scotch Creek Stabbing Case, in which after heavy drinking, and an argument, Billy Lee was stabbed seven times by his partner Charles Arbbuckle. A later news item reported that he had recovered and that is when he likely built his cabin near the creek where he panned for gold and did some trapping. No other information about Lee is available, other than he was British, but the remains of his cabin are still there, rotting into the ground. 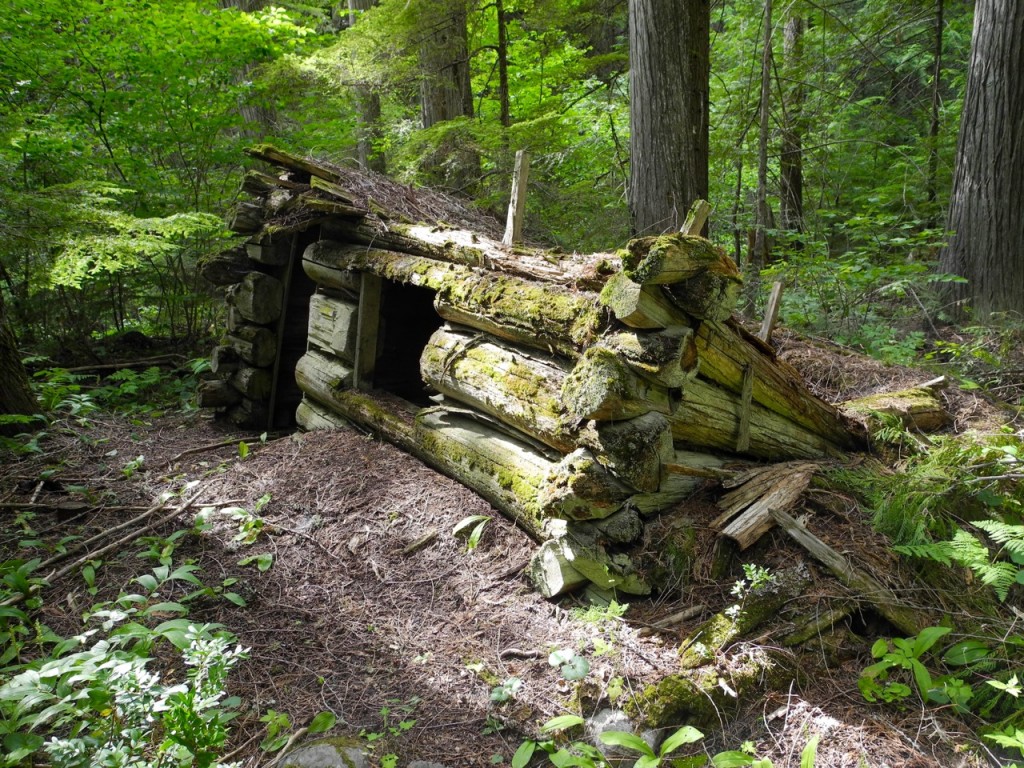 Lee’s cabin next to Corning Creek is slowly melting into the forest floor beneath large cedar and hemlock trees.

When the first permanent settlers began arriving in 1906, they named their community Lee Creek after Billy Lee who had lived there until likely 1894, the year of the big flood. Ray Corning arrived in 1913 with his wife and young son and after attempting to homestead they moved to Salmon Arm where he worked as a highway engineer. The creek was renamed after Corning in the 1940s when the first road and bridge were built. Lee Creek’s first permanent homesteader, Oliver Freeman, utilized the creek for irrigation and to power his sawmill. 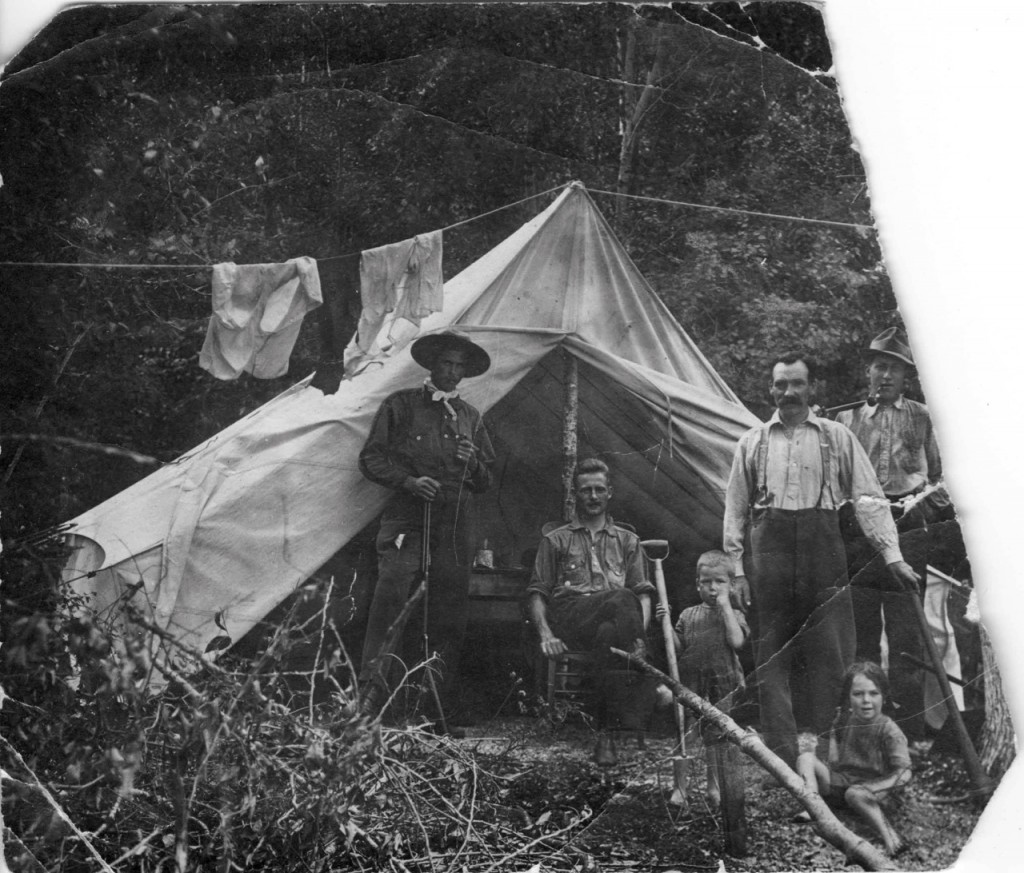 Standing without the hat is Lee Creek pioneer Alex McKay, on the beach meeting with another pioneer who had just arrived.

The 2011 census shows approximately 375 permanent residents of Lee Creek, although some may head south in the winter. The population increases substantially during the summer months when the seasonal residents return to their summer homes and recreational dwellings. The community includes a mix of typical sized lots, recreational lots, small acreages, and some tenants-in-common acreages, including one with its own community centre. 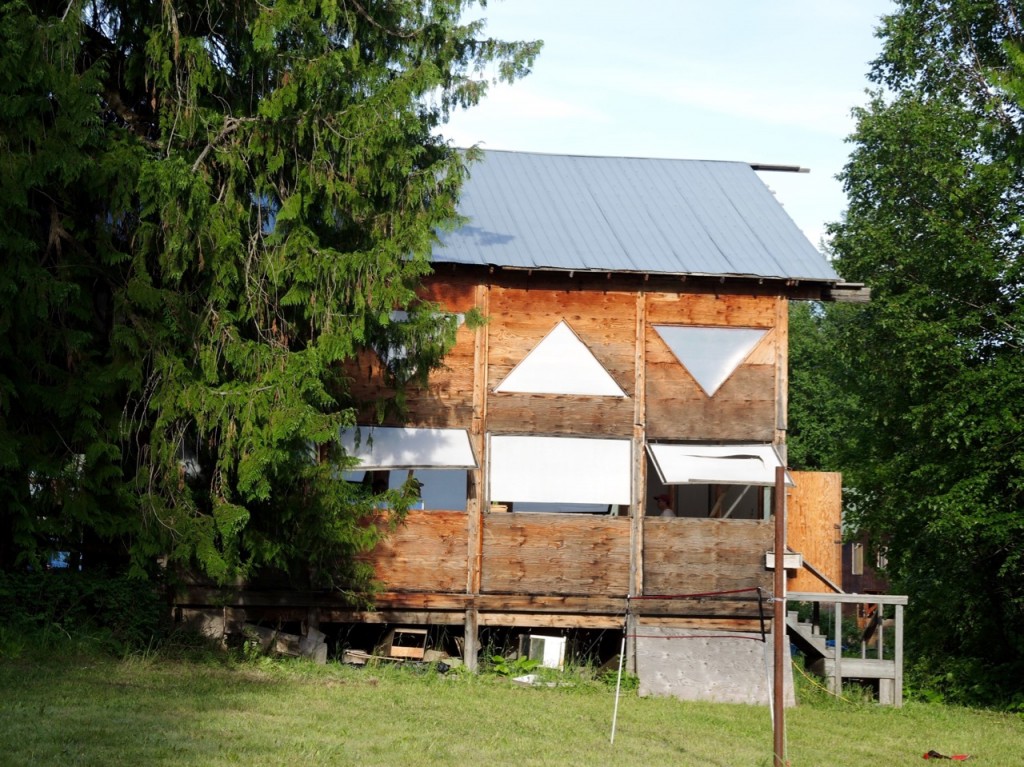 Although it is primarily a bedroom community, Lee Creek also has an industrial area that is primarily located on the western edge of community where it does not disturb local residents. The large gravel pit and cement plant services many nearby communities and when combined with the electrical and plumbing contracting service, these industries provide a major source of local jobs. Close to the centre of the community is a log dump, where timber from nearby logging operations is stored on the water and then moved via a tugboat to Canoe in large log booms. 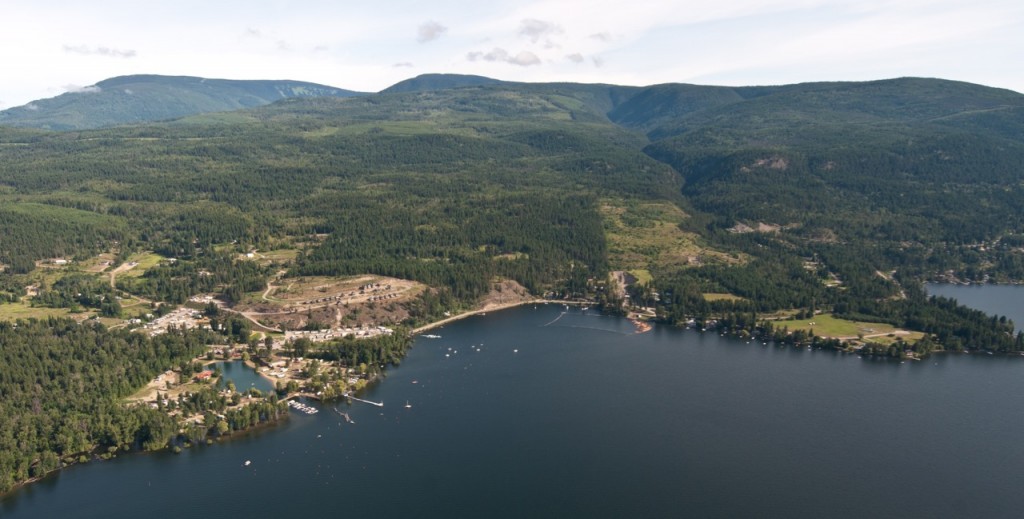 Lee Creek made the national news when the protest against a proposed village and marina near the mouth of the Adams River was successful and the regional district denied the permits. Development there is now limited to seasonal lots and was redesigned to protect environmental values and improve fish habitat. As well, the public now has access to one of the best beaches on Shuswap Lake. 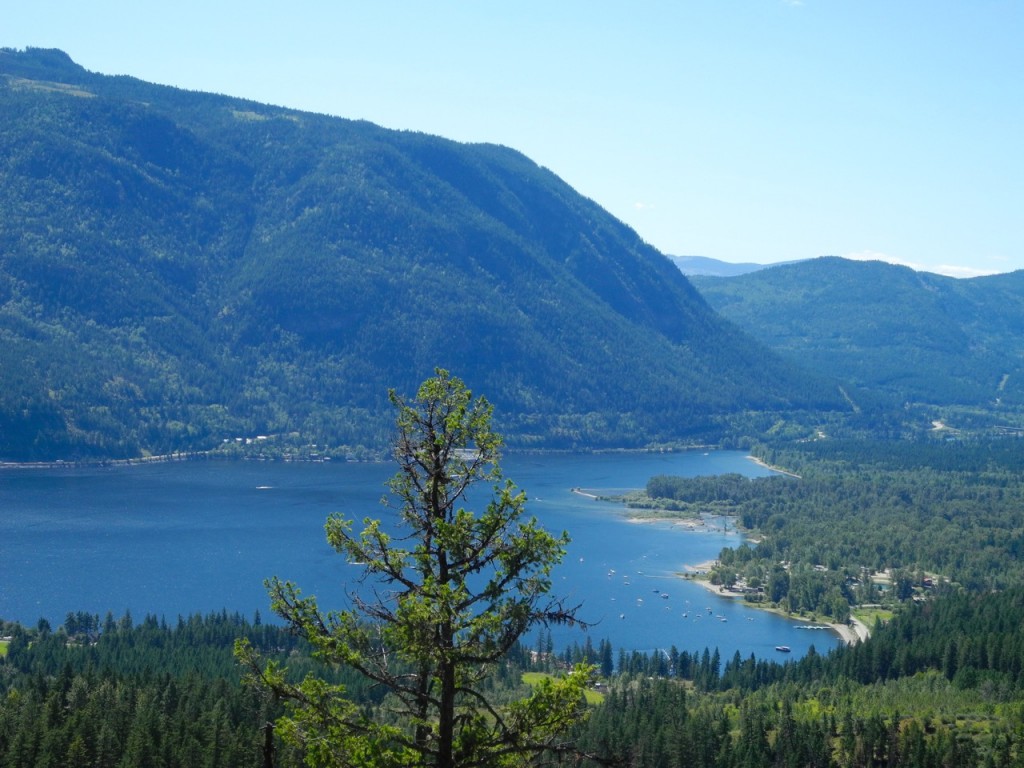 Few people are aware of the amazing potential hiking trails at Lee Creek, atop the bluffs overlooking the lake, along Corning Creek to a waterfall, and along the ridge of the canyon above the creek to the power line. The trails offer scenes of fire scarred old growth fir and pine trees, wildflowers in the spring, amazing vistas of the lakes, and a rapid transition from a dry hillside to a moist canyon with cedar and hemlock. 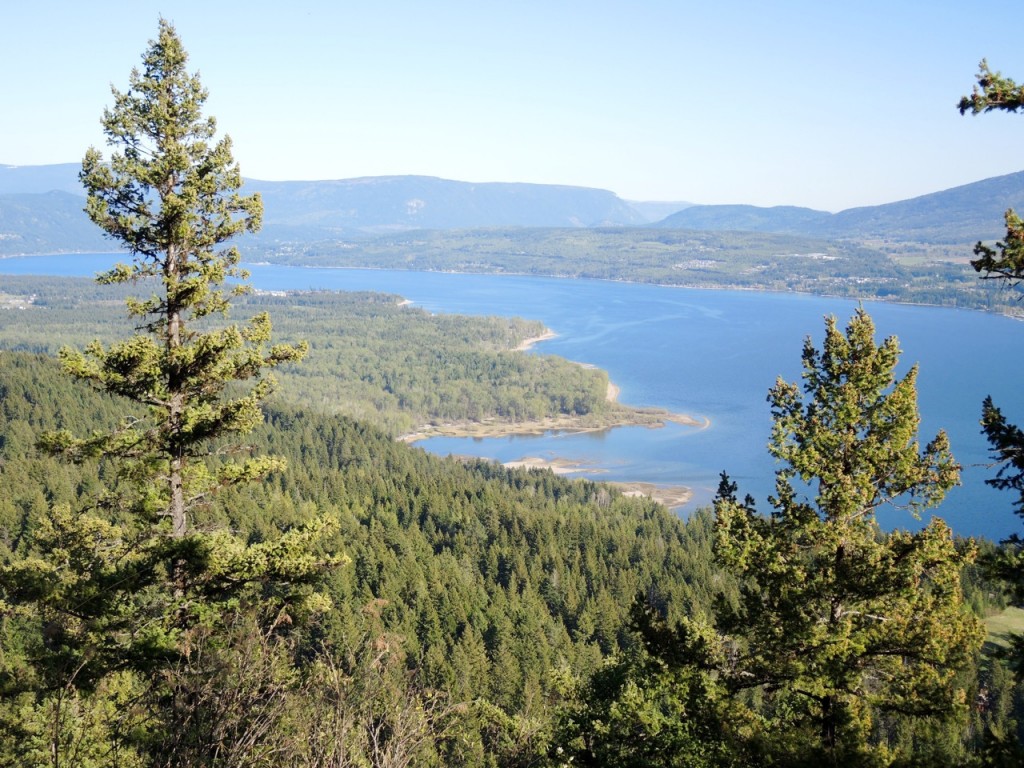 Even more incredible is that few people, if any, have ever ventured up the canyon above the waterfall, in what is now protected riparian and old growth forest. 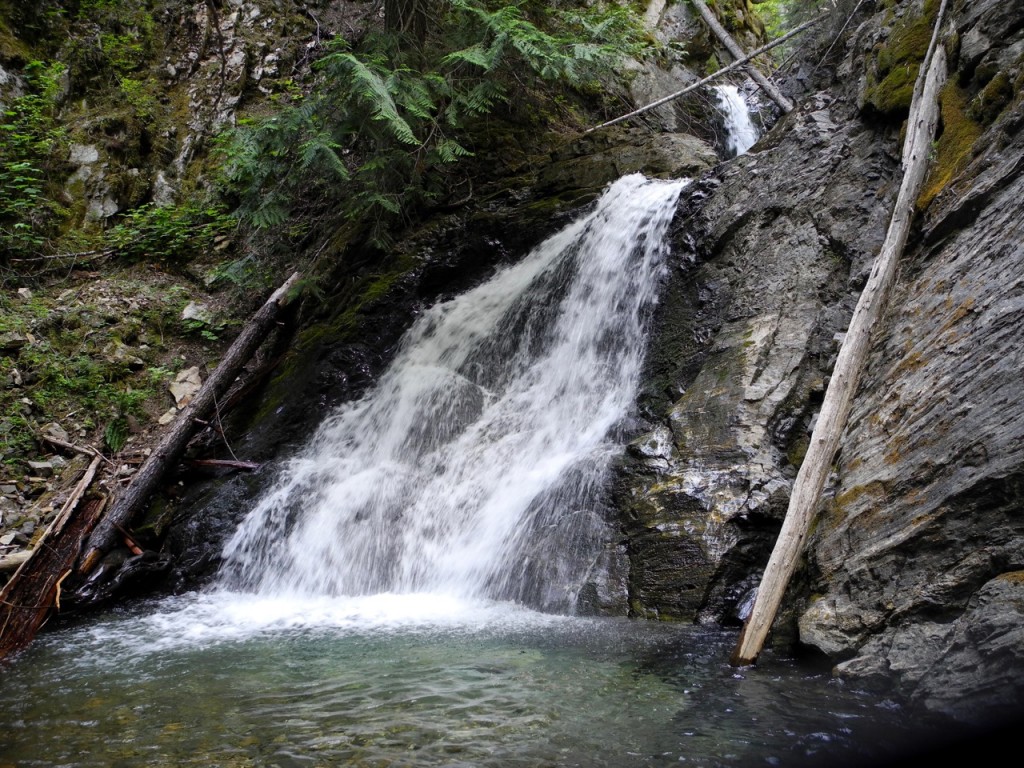 There are plans to build a firehall in Lee Creek on a lot adjacent to the creek and the highway. It may include a small hall, which will give the community a place to come together again as they did in the one room schoolhouse during the early years and at a hall that was part of the old Cottonwood Campground. There is a special place in my heart for Lee Creek, as I have lived there since 1969.

There are various neighbourhoods within Lee Creek, beginning at the west with Eva Road, followed by Whisper Mountain, and then two recreational developments with seasonal residents. Along the lake are lots with well established vacation homes, some quite large and some with secondary homes and a few of the original cabins. Freeman Road and Demster Roads have lots and small acreages. Then there is Lee Creek Heights, a subdivision with typical lots and above it is a community within a community with various tenants-in-common acreages and other properties.

Beach access for all those who live on the hillside of the road is important and the CSRD manages two sites, Cornwall Road and Martinowsky Road, a quite, pebbly beach with parking on the other side of the highway. Both are the standard size highway easement to the lake, originally designed for emergency access or to reach the lake with a pumper truck for fighting fire. Cornwall was recently upgraded with the addition of three parking spots, a vault toilet, and three picnic tables.

Another access to the lake is along the highway in McKay Bay, however parking can get very tight during long weekends. The absolute best beach is in Roderick Haig-Brown Provincial Park next to the mouth of the Adams River. However, one has to walk there and the mosquitoes can be fierce.

One other option for a waterfront park in Lee Creek is Bowering Road, near the end of Beatrice Road. The beach there is in the shade in the afternoon and the pebbles are smooth. It is undeveloped and is held up due to the need for an archaeological assessment. Ideally there could a low impact interpretive trail down to the beach that winds around the three or four large kekuli pit house depressions. And the end of Beatrice Road is a short trail along Corning Creek, that is part of the park system.

Lee Creek was once a Secwepemc village, and during the settlement era, Secwepemc people came to camp there on Oliver Freeman’s homestead. When the gravel began to be excavated from the pit across the highway from the log dump, hundreds of bones and artifacts were found, as this was a graveyard. The Little Shuswap Lake Indian Band has a large reserve that stretches from Lee Creek to Scotch Creek, including part of Indigo Bay, which is an undeveloped, wetland and wildlife sanctuary.

When I first moved to Lee Creek, there were not many full time residents and the hillsides were undeveloped. The community occasionally came together at the private hall at the Cottonwoods Campground, which was also popular for square dancing. Over the years, we have seen many changes as more and more people have moved here, to this sun drenched Shuswap paradise that is just 40 minutes from Salmon Arm and 50 minutes from Kamloops.