Hiking with the deities at Joss Mountain

Home » Hiking with the deities at Joss Mountain 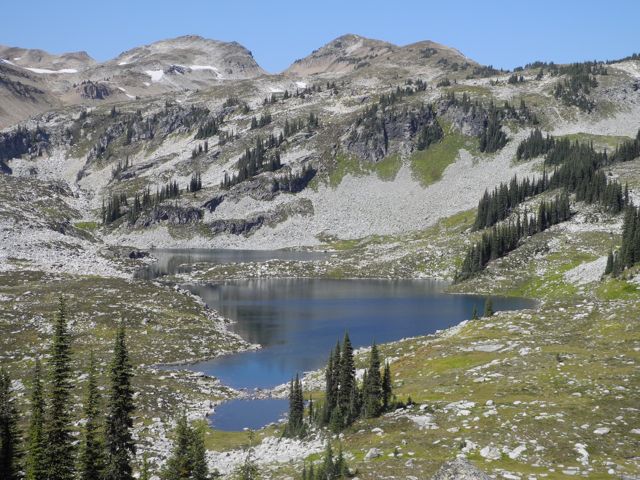 “Instructions for living a life: Pay attention, Be astonished, Tell about it.” This was the short poem by Mary Oliver that Trail Alliance executive director Phil McIntyre-Paul read to us as we paused during our September 15th hike up to Joss Mountain Lake. We had no trouble paying attention, as one had to in order to stay on the steep, narrow trail and it was easy to be astonished by the magnificent alpine views. Now it is my turn to tell about it! 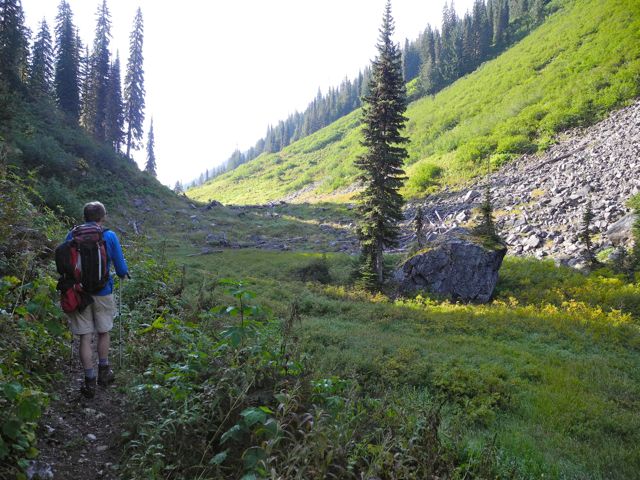 The trail begins along a logging road high above Three Valley Gap near Wap Creek and it is very old. The first section is located in Joss Pass, the ancient route used by the Secwepemc people who travelled between Greenbush Lake at the top of the Shuswap River drainage and the Eagle River drainage. There are still parts of this route that are compacted from centuries of use and plans are in place to restore the trail by the Splatsin Band. 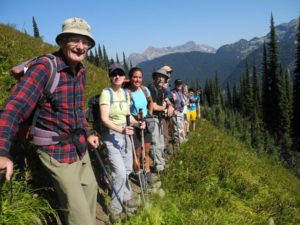 We angled off the pass up an avalanche slope on a metre wide packhorse trail that was built in 1921 to service the fire lookout on top of the mountain.  Alders and berry bushes are growing into the switchback trail, so it has required brushing to maintain a walking surface. The fire lookout was one of three built by the Dominion Government in the early 1920s to protect timber in the Railway Belt. Along with the lookout there was a service cabin built in the pass and a telephone line ran all the way from the lookout down to the valley.  The Joss lookout was abandoned in 1930, but it is now in excellent condition, as Columbia Helicopters restored it with a new roof and windows in 2005 in conjunction with the B.C. Wildfire Management Branch. 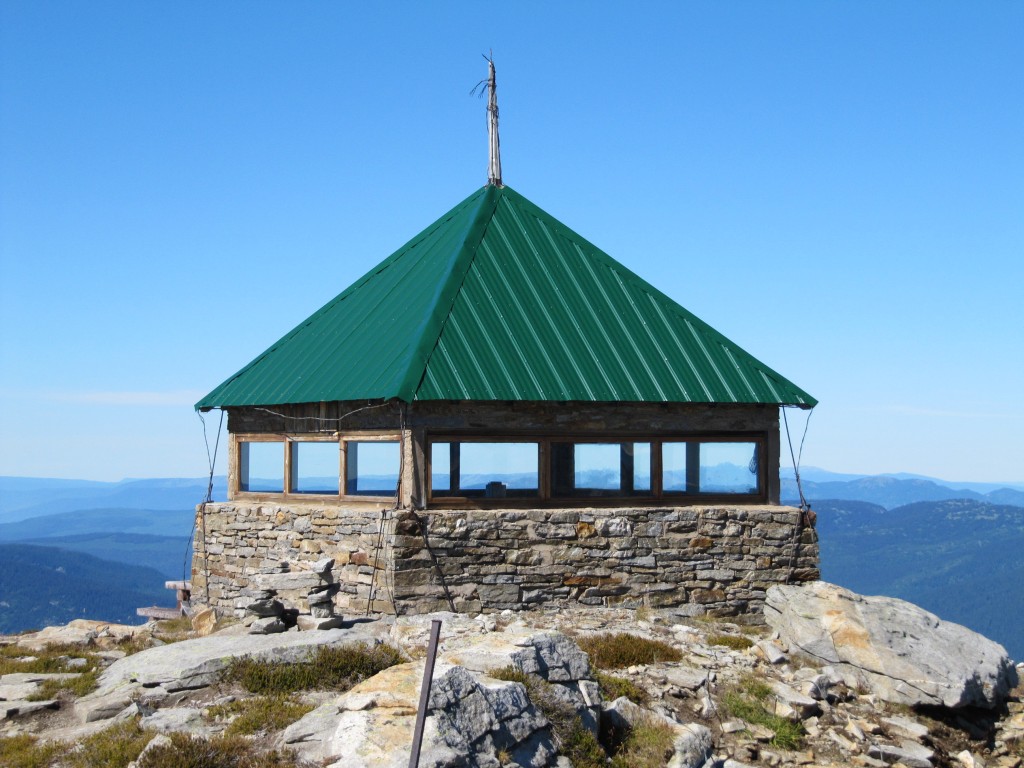 An internet search revealed some information about the origin of the mountain’s name. GeoBC explains that if a mountain name begins with Mount, it is named after a person. The word Joss is derived from the Latin “deus” or god by the Chinese, who also burn incense called Joss Sticks during their religious ceremonies. When the railway was built there was likely a Chinese work camp in the valley below, which likely resulted in the mountain named by them after the gods, as it is truly a majestic peak. 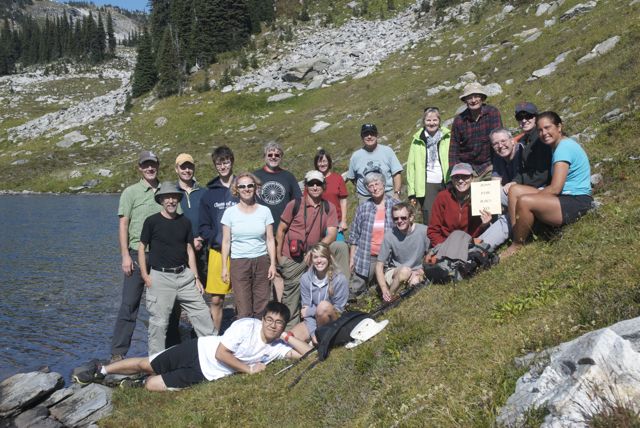 There were 21 of us on the hike organized as a fundraiser for the Shuswap Hospice Society in conjunction with the Shuswap Trail Alliance. We ranged in age from 75 to 19 and after three hours we reached our destination, Joss Lake, in two groups with the two oldest hikers in the faster group. Although grizzly bears are common in the alpine and a young one has often been spotted in the Joss area, we felt safe because of the large size of our group. 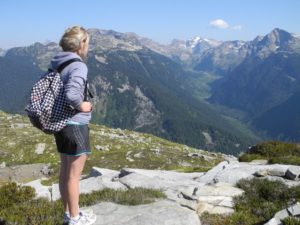 Unfortunately, there was not enough time to hike to the peak, so we enjoyed a leisurely lunch along the shoreline and watched two of the teenage hikers join one of the Trail Alliance guides take very quick dips into the ice-cold lake. Some of us then climbed up the “bump” to get better views of the alpine plateau and distant peaks, the massive Blanket Glacier, the Shuswap’s highest peak, Mount English to the east and far to the south, a glimpse of Mabel Lake. 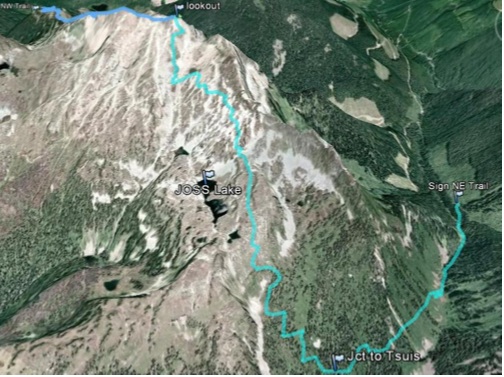 It is difficult to accept that fabulous hiking trails like the one up to Joss Mountain could result in recreational use conflicts, but that is the current situation. While the Trail Alliance works hard to consult with all of the stakeholders, including First Nations, regarding planning and trail design, ad hoc groups have built other trails without approvals. 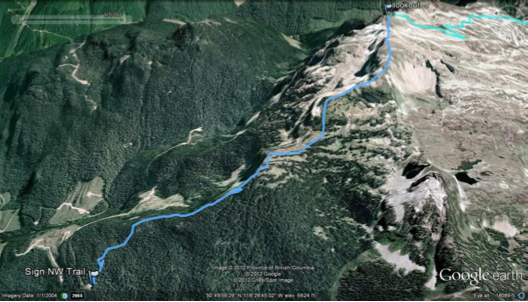 Because logging and roads now extend up to the alpine in many areas, new trails are being built in many areas including a shorter and steeper one on the west side of Joss peak. Even though the alpine is supposed to be off limits to motorized vehicles, we could see the tracks left by motorcycles that somehow have ventured to the top of Joss Mountain. And although the trail has long been designated for hiking, the Revelstoke Cycling Association is promoting the area as a biking trail. 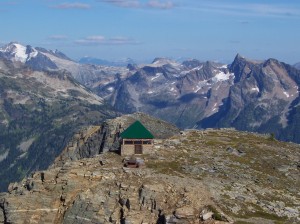 Rather than dealing with every trail issue on a case-by-case basis, the Shuswap Trail Alliance is now working with all user groups and the public on a recreational access and trail management planning process for the entire region. Meetings have been held in local communities and there are still opportunities to provide input on trails and routes that should receive priority. Contact trailreport@shuswaptrails.com or phone 832-0102.

Watch the Joss Mountain hike video with a Shuffle Demon soundtrack….here is the link: Joss Video

A number of hikers are now during a circle route by leaving a vehicle at the start of one trail and beginning the hike at the other trail. The NW route is shorter, but steeper.

The Splatsin Band will soon be posting a sign at the Joss Mountain trailhead with this text: “The people of Splatsin have had a connection to this area for thousands of years and have travelled through this area as part of their yearly seasonal rounds, which included activities like hunting and wild food gathering. The people of the Splastin community still utilize this area for these same purposes today.”