Clues and mysteries in old maps

The 2012 book British Columbia, A New Historical Atlas by Derek Hayes provides an insightful look at the history of the province using old maps. Beginning with the first, hand drawn map of this region from 1814 by famed explorer David Thompson to the Surveyor’s General 1915 map, the shape of Shuswap Lake changed as cartographers became increasingly more accurate. These maps provide clues about our region’s history as they show the locations of old trails, wagon roads and communities and they show how well the geography was understood at that time. And there are mysteries surrounding some of the names and the spellings, and the sources of the mapmaker’s information. 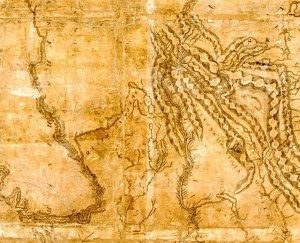 David Thompson never did visit the region and the map he drew was based on information he likely received from his native guides. Shuswap and Kamloops Lakes are shown just as simple polygons attached to what he called the “She-Wap River.” Thompson must not have known that famed explorer Simon Fraser had named the river after him in 1808 when he drew the map six years later. Barely discernable on this map are a few letters of the word “Ookenawkane,” next to the lake, which was one of the spellings that Thompson used for Okanagan.

In 1824, the British mapmaking firm of Arrowsmith published the first map that included the Shuswap region. It shows one long polygon called “Schewap Lake,” and the Salmon River with the Fur Brigade Trail crossing it and heading south to “Otchenankane Lake.” 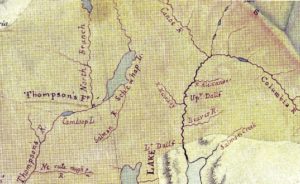 A portion of the 1824 Arrowsmith map, courtesy of Derek Hayes and Hudson’s Bay Archives

In 1827, Archibald McDonald, who was then a clerk at the Hudson’s Bay Company’s (HBC) Thompson River Post in Kamloops, drew a far more accurate map of the B.C. Interior that shows Indian territories, perhaps because he had actually visited Shuswap Lake to purchase furs. The map clearly shows the H shape of “Shewap Lake”, along with the unnamed Mabel and Sugar Lakes. This map was likely not available to subsequent mapmakers, as the H-shape of the lake did not re-appear on maps until Walter Moberly’s 1865 map documenting his discovery of Eagle Pass.

A portion of the 1827 sketch map by Archibald McDonald, courtesy of Derek Hayes and Hudson’s Bay Archives

McDonald also drew in the important Fur Brigade Trail route through “Big Prairie” alongside the clearly marked Salmon River through to the Okanagan. Just north of Monte Lake is shown “Colt Encampment,’ and on later maps, “Camp du Poulain,” as this area was likely used for horse breeding for the fur trade. There is also a trail from where Cherryville is today through to the Columbia River marked “Communications with Columbia.” And the mystery in this map is the name McDonald gave to Adams Lake and River, which looks like “Choo Choo Nah.”

Samuel Black was the hot-tempered HBC chief trader at Fort Thompson from 1830 until 1841, when he was shot by a native named Kiskowskin, who incorrectly blamed him for the death of his uncle, Chief Tranquille. Black’s hand-drawn 1833 map of the district is messy and difficult to decipher, but it contains many early place names. Although not accurately drawn, “Shoushwap Lake” appears with small arms and to the south, the “Spillumchim River” flows through two lakes before entering Shuswap Lake, as Mara Lake is not shown. 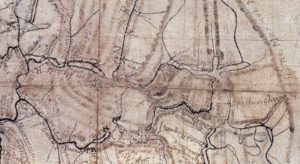 A portion of the 1835 map of map by Samuel Black, courtesy of Derek Hayes and the British Columbia Archives

More trails are shown extending from the Fur Brigade Trail, including one that goes to the outlet of the “Spillumchim River.” This is also the first map that shows a “barrier” on the Adams River at the gorge, which was the term used to describe a fish weir. Interestingly, it also shows a “salmon fishery” on the “Spillumchim River” between Sugar and Mabel Lake, perhaps were the dam is today. Fortunately, Black’s name, “Alpine Marmot Mountains,” did not stick for the range now called the Monashees.

Three creeks that flow from the north into the Salmon River appear on the map as rivers called G. Prairie (for Grand Prairie which became the name for this area), Bouleau and Ferris. Bouleau means birch in French and likely refers to the use of the wood for furniture and packsaddles. It was later Anglicized to Bolean by a Scottish draughtsman. No information is available for who Ferris was, as 1833 was long before any settlement occurred.