The Adams River is on the move

Home » The Adams River is on the move 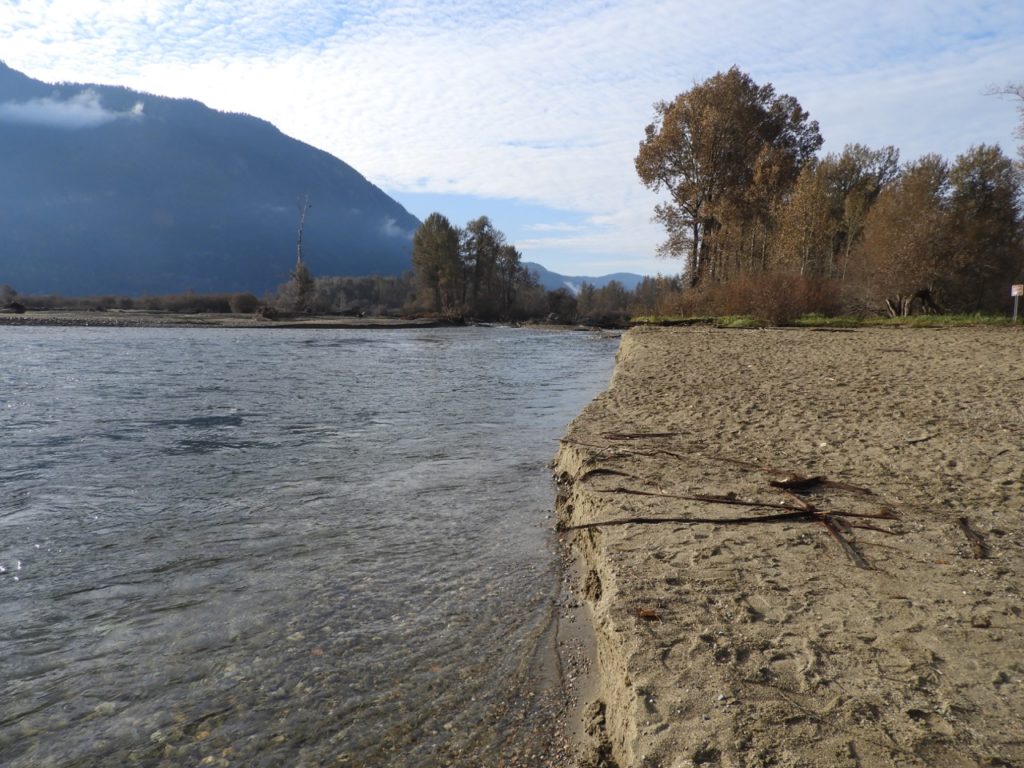 The majority of the Adams River flow has moved north and has swept away some of the beach at the mouth, photo by Jim Cooperman

Many rivers are dynamic, and change their courses over centuries, decades, or years or even on a fall day when the level is low, which is what the Adams River did in the middle of October. To the north of the mouth of the river is one of the best sandy beaches on Shuswap Lake and is popular with locals once the mosquito season is over in August. In the last few years, the river, which had flowed into the lake in multiple channels, consolidated with much of the flow now concentrated south of the beach.

The Adams River has changed courses within its last three kilometres many times, with remnants of old channels found in the surrounding forests throughout the wide alluvial fan. Not all the changes were natural, as some were likely a result of the splash dam built in approximately 1907 by the Adams River Lumber Company. 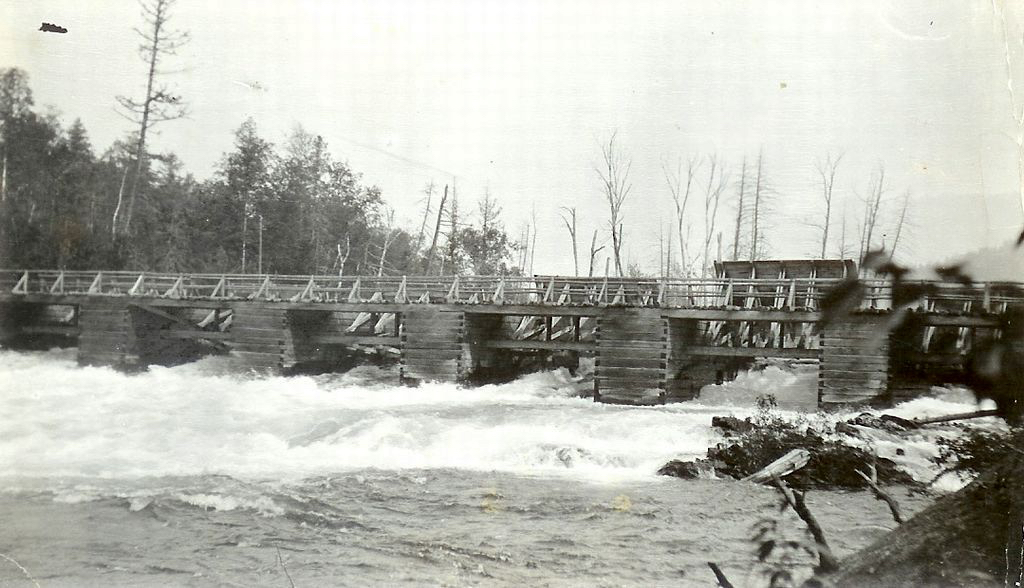 The dam held the height of the lake at freshet level until the yearly river drive began when the gates were opened to flush thousands of logs down the river, scouring the river bed, damaging the stream banks and likely opening up new channels downstream. Dynamite was even used to help break up logjams. Also, during low water, the dam restricted flows, which caused the lower river to nearly go dry.

According to local engineer and river specialist, Alan Bates, “one might expect the lower river to be fairly stable due to the moderating influence of Adams Lake.” However, given that the river is very dynamic, he thinks that “studying the changes along the lower Adams River over time (using available aerial photography) to determine the impacts of the splash dam and other natural and unnatural influences would make a good Ph.D. Thesis in fluvial geomorphology.”

Fisheries and Oceans Canada did a study in 2015 that determined that steady accumulation of gravel in the south channel reduced its flow level and thus reduced habitat. The study attributed the aggradation to peak flows and sediment from Hiuhill and Nikwikwaia Creeks. As well, an attempt in 1974 by the Pacific Salmon Commission to open spawning channels ended up having the opposite effect. 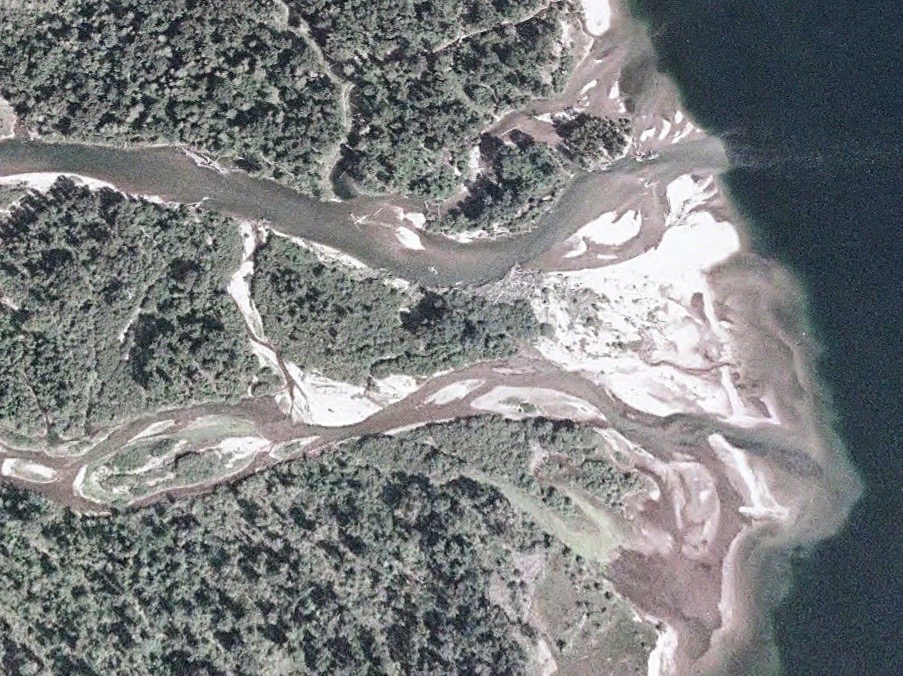 Google Earth image of the Adams River Mouth, December 31, 2003 – Note how the flow is distributed fairly equally throughout the wide fan

After examining Google Earth images from the previous 17 years, Bates has noticed how the high water levels in 2018 resulted in the river cutting off a meander bend, rerouting the main river flow south away from the viewing platform. This sediment likely moved downstream and blocked southern channels, which forced the river to move north and create a new island at the mouth. 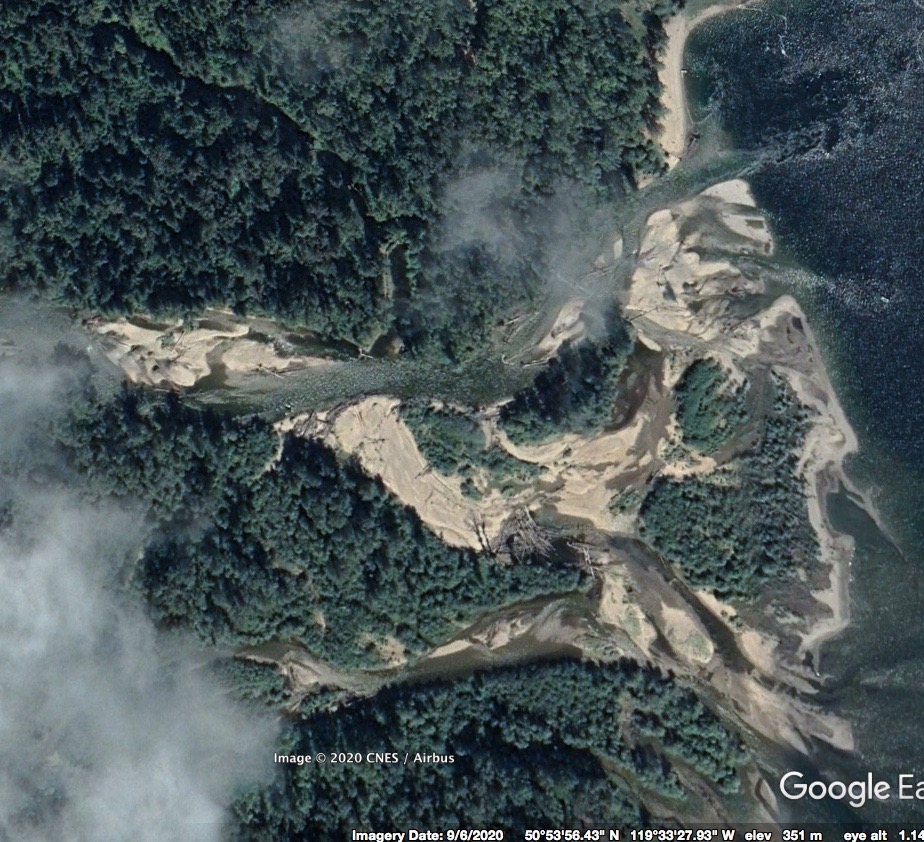 September 6,2020 images shows how most of the flow at the mouth is now concentrated  in the northern stem of the river

The federal government has had a gauge on the river since the early 1900s and the online data shows major peaks in volumes during the flood years of 1948, 1972, 1999, 2012 and 2018. Yet, it appears that only the last flood year resulted in significant changes at the mouth. 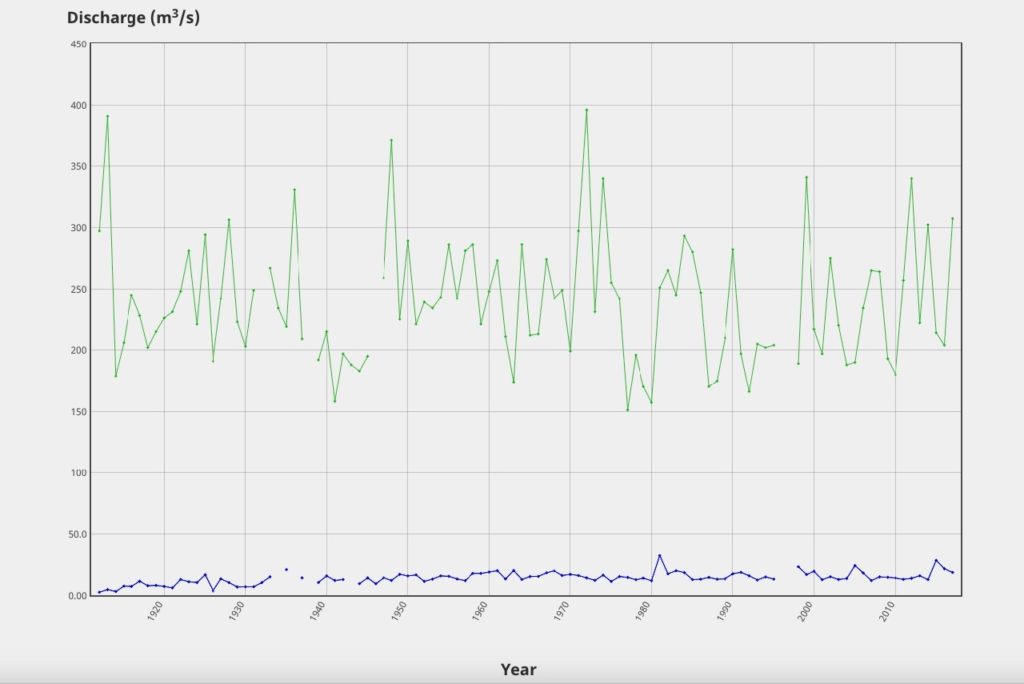 Concerns about the loss of salmon habitat due to the river flow bypassing blocked side channels resulted in the unprecedented effort this spring to open up the channels with large excavators. Restoring habitat meant forcing it to flow in many side channels. {read more about this effort here: Urgent Adams River restoration work to support salmon run)

This is likely how the river flowed in this area historically, given that the new Secwepemc name chosen for the park, Tsútswecw, means “many rivers” and was the commonly used place name for this part of the river. 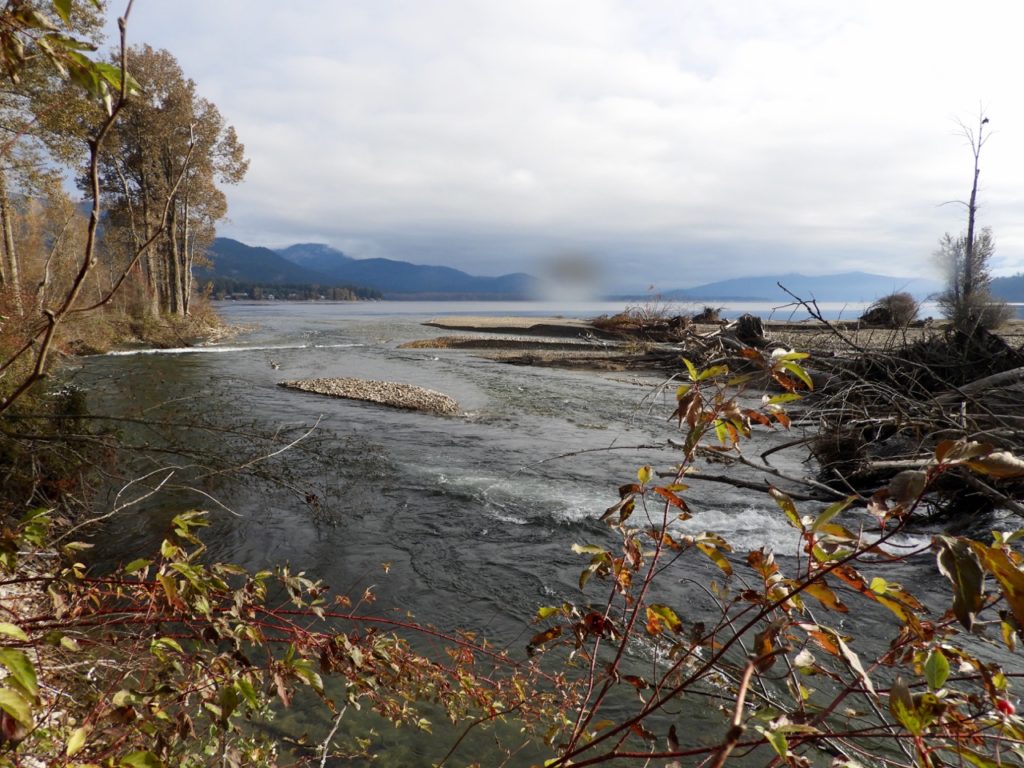 A view of the mouth from upstream looking east, notice the buildup of gravel on the right that has forced the river to move north

The question remains as to why the river suddenly shifted north at the mouth this October during low water. Bates explained how “the patterns of erosion and scour can change right near the mouth as Shuswap Lake recedes.” The online water flow data does show a spike on October 16th that was likely due to heavy rainfall, which could have contributed to the fan deposits pushing out into the lake causing some of the beach to be carried away and the river to suddenly move north.

The old adage, “the only thing constant is change,” certainly applies to the Adams River, as no doubt the river will continue to move. Climate change could exacerbate the changes, given it is predicted to result in more extreme weather. As well, when the glaciers finally melt, river flows will decrease in the summer and fall.

The contractor that supervised the restoration work this spring, explained how they are monitoring the river using a drone and that there is funding left for more machine work. The plan is to open up more channels, including increasing the flow at the mouth to the south.

The changing river has also resulting in many changes to the trails, with some now closed. Near the mouth, a short trail to the river near the bridge over the artificial channel has been allowed to be overgrown with brush and a bench was moved.

Here is an image taken from on top of the Lee Creek Bluffs that clearly shows how the river mouth is moving north: 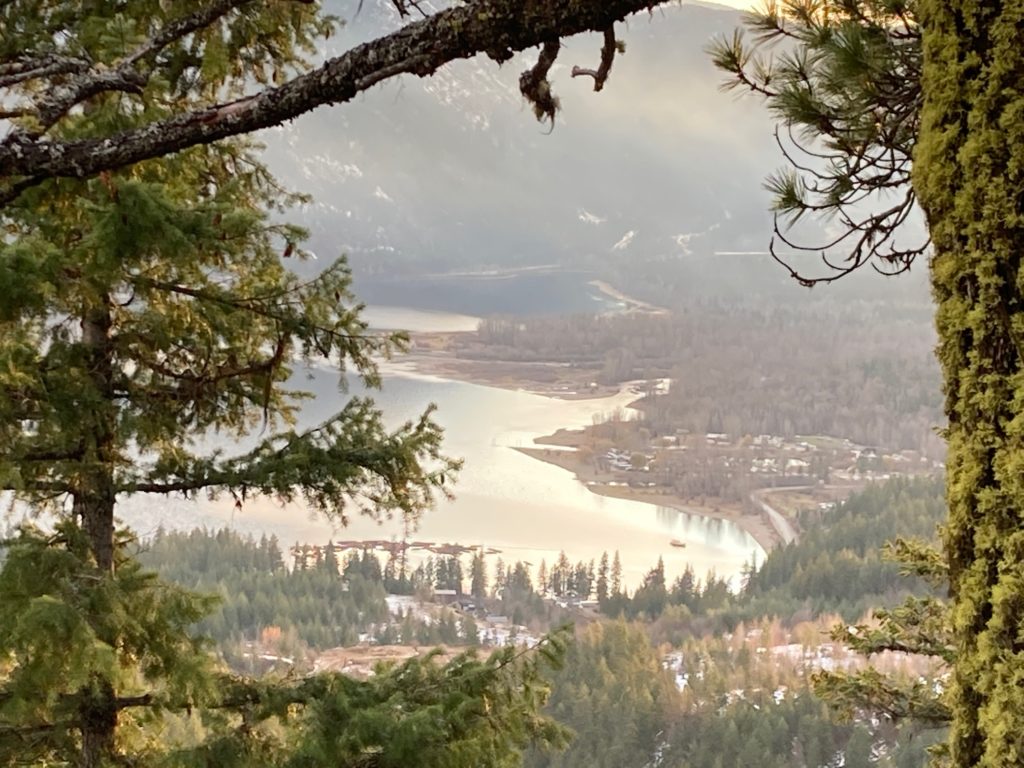 These Google Earth images provide more views of the changing river over time: 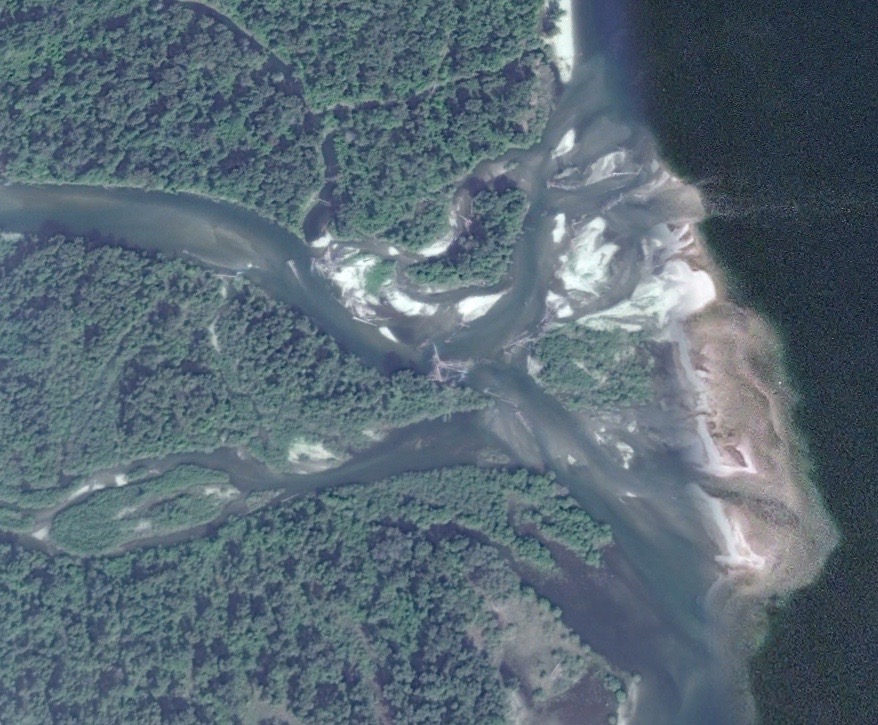 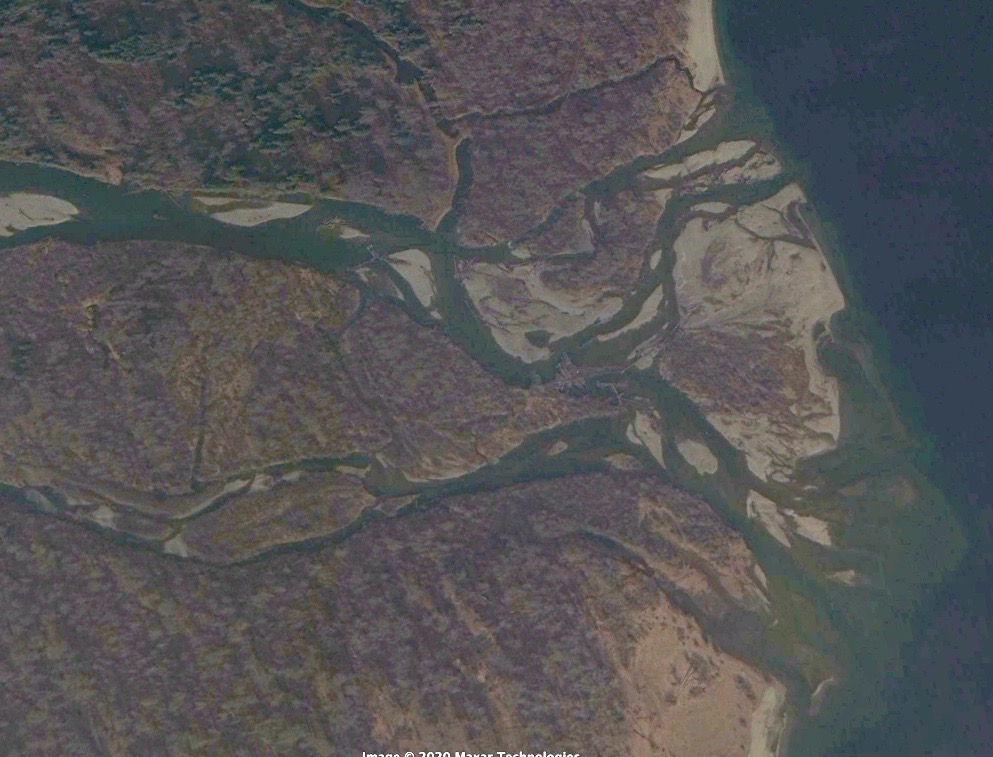