Journey into the Upper Seymour

Home » Journey into the Upper Seymour 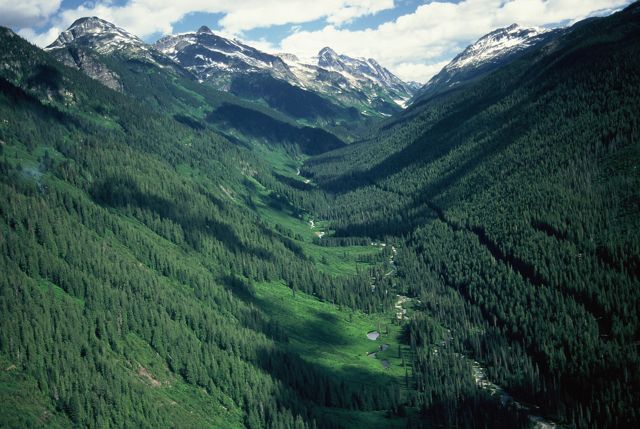 I first learned about the Upper Seymour during the summer of 1993. After an expedition into the Hunakwa Lake wilderness area, I stopped for dinner at the Seymour Arm Hotel and chatted with a logger who told me he was building a road into a forest with the biggest cedar trees he had ever seen. My first visit into the Upper Seymour was with forest service ecologist Dennis Lloyd and government staffer Dave Tudhope in the spring of 1994. We were truly astonished by the massive size of the trees in this rare interior rainforest.

[Watch the 1997 video, Shuswap Wild, with its clips of the Upper Seymour here: http://www.youtube.com/watch?v=_bmo34Ma8TU&feature=plcp

And watch the Journey into the Upper Seymour video here: http://www.youtube.com/watch?v=dpFko3YxXVw&feature=plcp

During the next trip with fellow conservationists, I took a photo of the group surrounding the largest tree, the 3.65 metre diameter Seymour Giant, 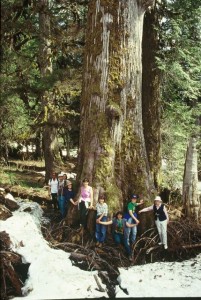 which was later presented in a frame to the Regional District Manager, Fred Baxter, during a meeting to resolve the ensuing conflict with the logging company that was planning to log this forest. That photo helped, as Baxter issued a moratorium that allowed the company to only log half the blocks. After six years of intense advocacy, extensive land use planning negotiations and many trips there with various groups, 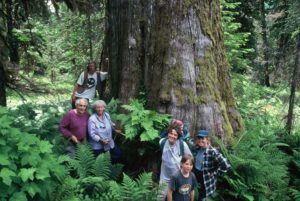 I have long wanted to return to the Upper Seymour as it has been over ten years since our last visit. Besides wanting to check on the status of the giant trees, canoeing on the meandering river has long been on the to-do list. 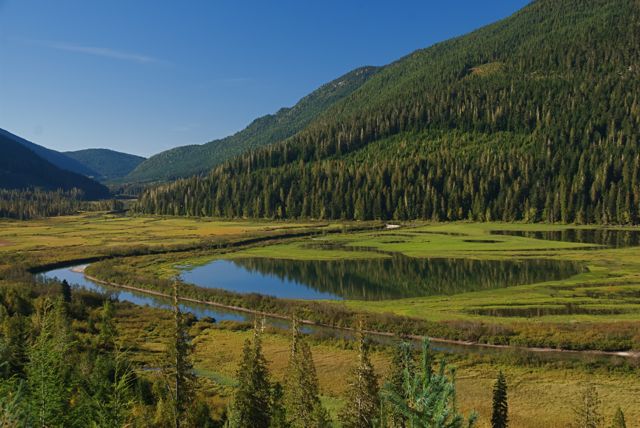 At one time, we could drive into the ancient forest, as the company had built the roads and the landings before the moratorium was issued. But the status of this access was unknown.

On September 18, four of us headed up to the Upper Seymour with two canoes and four mountain bikes. We arrived to hear wolves howling in the distance and found a camping area close to the river on the east side of the out-of service bridge at 33 kilometres. There was also a trail into a perfect take-out just upstream prior to the start of some rapids. We then had to find a suitable spot to launch the canoes.

While the logging road parallels the river, any attempt to reach the river would be downhill through dense brush or extensive wetlands. As no perfect spot could be located, we chose a location at 48 kilometres that was closest to the river but required us to use a rope to lower the canoes down a steep hillside through devils club. Fortunately, we had a heavy-duty clipper to make a short trail through the brush and alders. The canoes were then ready to launch the following morning. 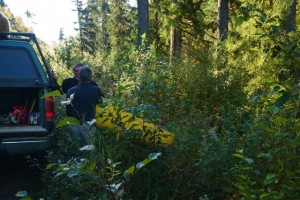 We knew the road into the ancient forest, which begins at 51 kilometres, was not passable by vehicle, so we placed our faith in the mountain bikes. Despite the thick brush, after just 45 minutes of biking, we entered the landing adjacent to the Seymour Giant, which is still healthy. 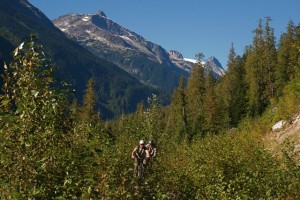 Ferns as high as our shoulders filled the wide-open spaces between the giant trees and we were all ecstatic as we hiked to the river. One day, I hope to return to hike up the valley to the alpine, a journey that likely no one has ever accomplished. 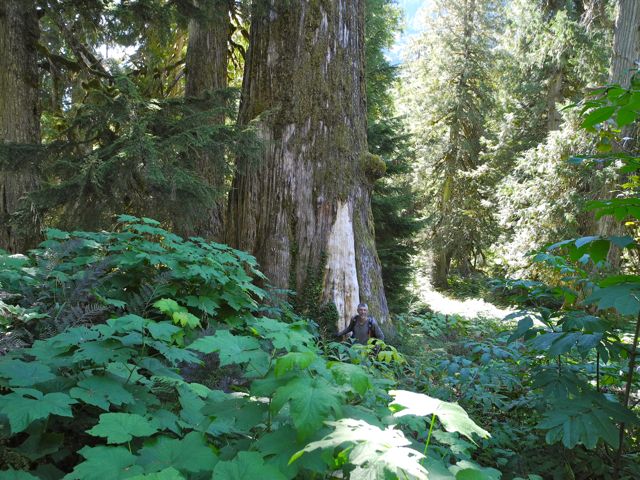 “Seymour Giant” now with some missing bark, but still healthy

As we had no idea how long it would take to canoe the river, we managed to get a very early start the following morning when we began the paddle in the cool mist. There were light rapids to negotiate in the upper section, but the river is shallow and thus safe.  The trip was fantastic, with amazing views of wetlands, mountains, and glaciers. We encountered only four sweepers, which required short, easy portages. 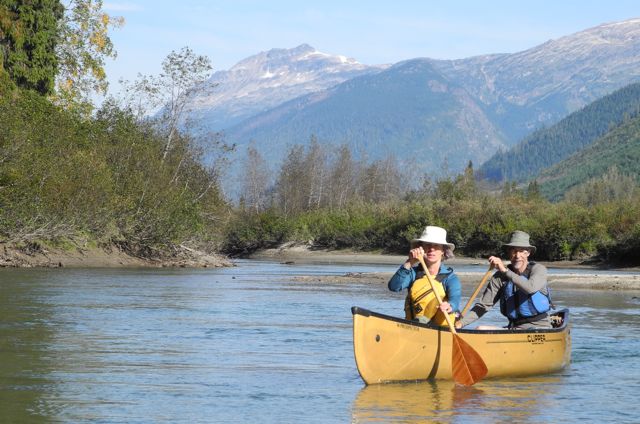 Canoeing bliss on the river

The sandy shoreline was littered with moose and wolf tracks and there were many signs of beaver.  Farther down the valley there are huge oxbows filled with wetlands and small lakes. We stopped at one and hiked into the area to see a massive beaver lodge and take photos of the wetland with the reflection of the mountains in the still water. Near the end of the valley, we were able to canoe into a small lake attached to the river that was exquisitely serene. 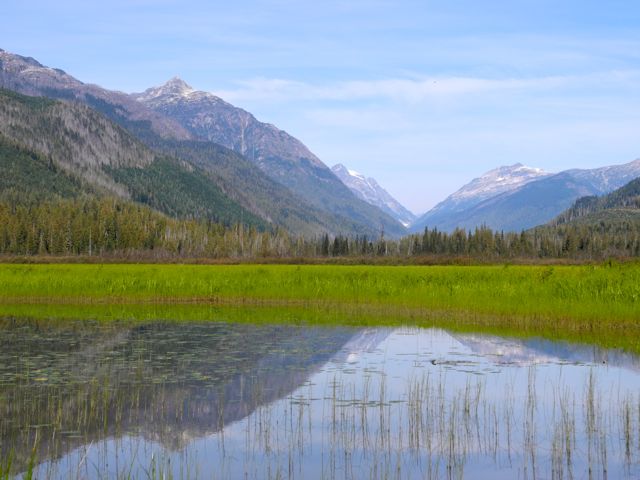 It only took us 5 hours to canoe the route, including our stops for lunch and breaks. Even the take-out was enjoyable, as we carried the canoes out along the trail in another stand of massive trees. On our return, we stopped to visit the scenic Seymour River falls and canyon, one of the Shuswap’s truly special places. 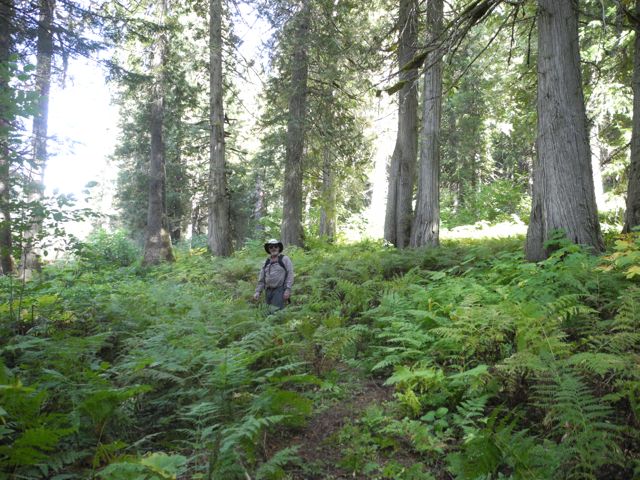 The take-out trail in the old growth cedar rainforest

The Upper Seymour River Provincial Park offers amazing opportunities for canoeing, wildlife viewing, and hiking. One day the provincial government will realize the importance of improving infrastructure in its parks and perhaps then this area will finally receive some attention that will help entice more visitors to appreciate its values, as with appreciation comes greater understanding and respect.

It was truly a long, arduous campaign in the 1990s to protect the Upper Seymour, but what really helped is that we had government biologists and ecologists on side. After the agreement was reached at the Land and Resource Management Plan (LRMP) negotiation table in 1999, there was a massive windstorm that blew down many of the trees in the soon-to-be park. Consequently, we were obligated to agree to these trees being removed and thus the first part of the park contains clearcuts.

While the main intention of creating the park was to protect the very unique, antique rainforest that was left standing in the upper watershed, we also protected the riparian area alongside the river for 18-20 kilometres below the ancient forest. This strip, which also includes clearcuts (now plantations) is between two roads that parallel the river. The road on the west side is now permanently cut off, as is the out-of-service bridge is set to be removed this fall.

We had a really magnificent experience visiting the ancient forest and canoeing on the river. Hopefully, this article will inspire others to experience the Upper Seymour. 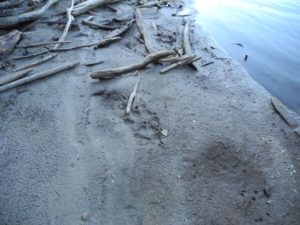 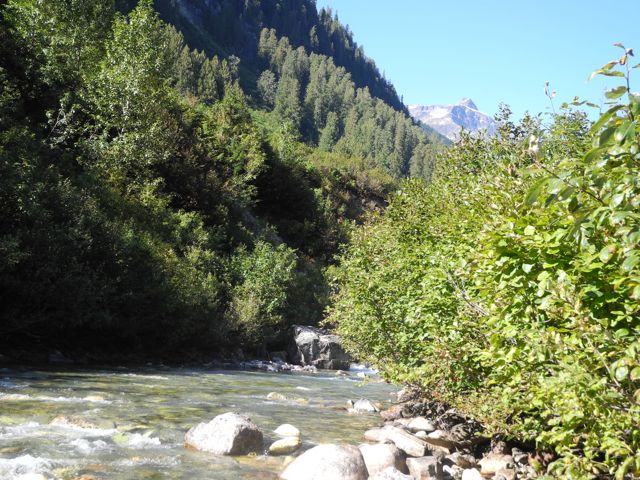 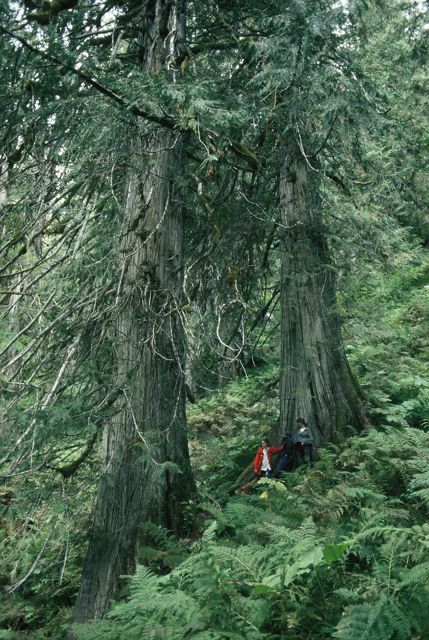 Another scene of the ancient forest from the 1990s 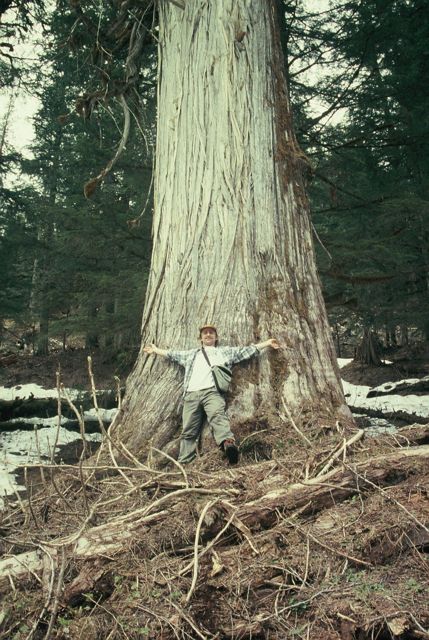 Our first trip to the Upper Seymour in 1994 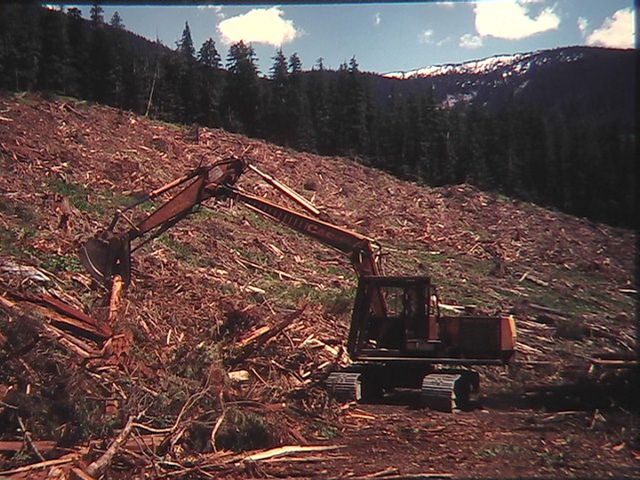 Logging in the Upper Seymour, circa 1995 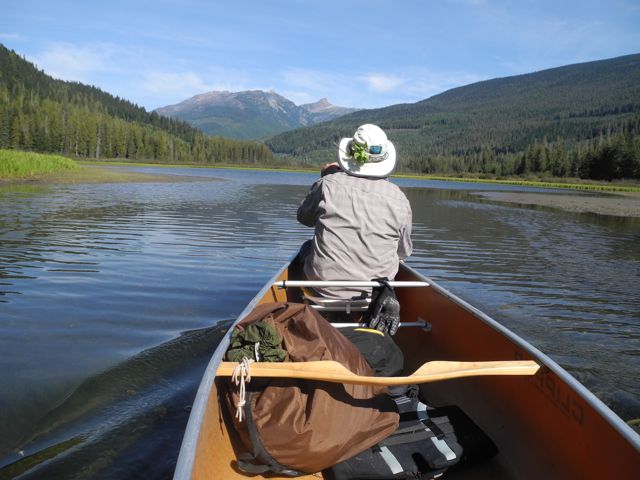 Entering the small lake attached to the river