An art show that is not to be missed

Home » An art show that is not to be missed 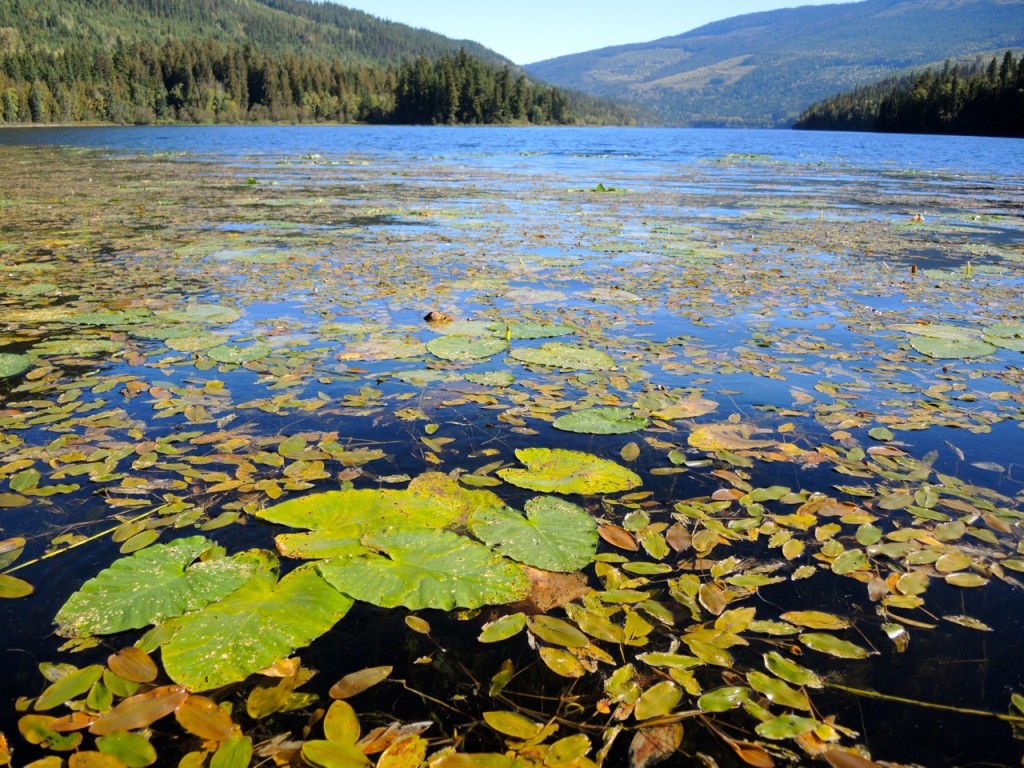 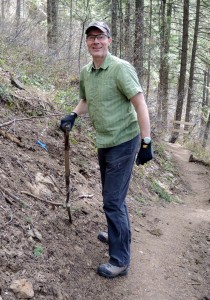 and Salmon Arm Art Gallery Director Tracey Kutschker jointly conceived their collaborative project to meld experiencing Shuswap trails with art and photography. The result, an exciting and unique show, is open for the summer and deserves to be seen by everyone. Prepare to be inspired, as the paintings, the photos and the stories will both engage you and encourage you to experience these remarkable areas yourself. 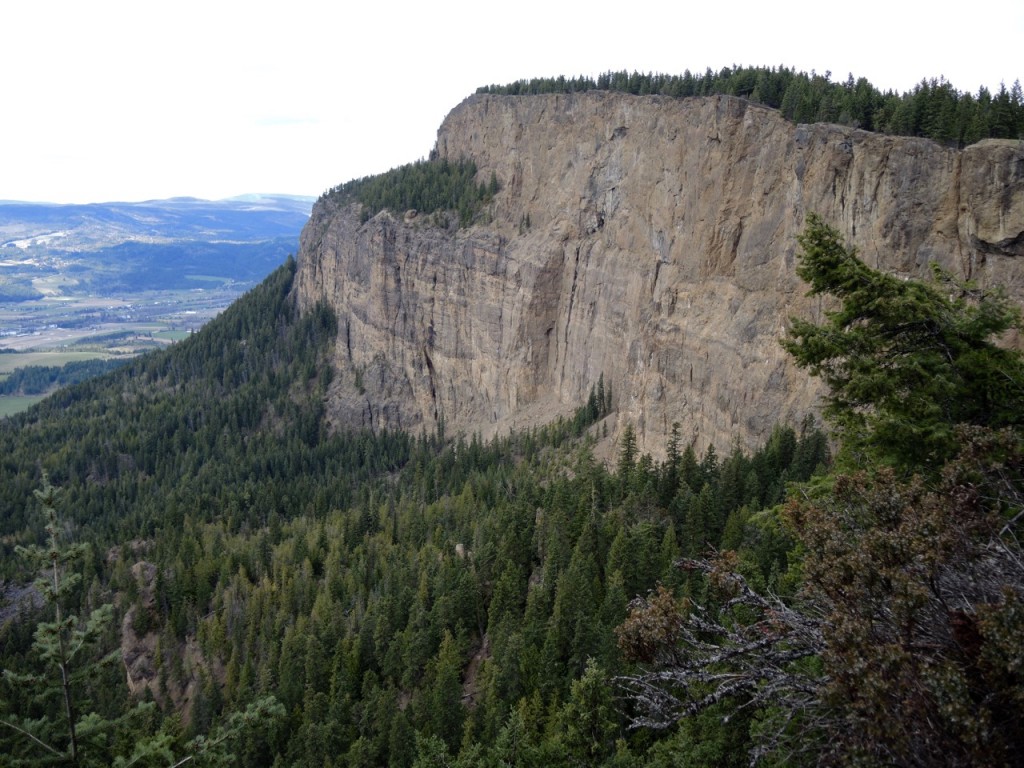 It was an enormous challenge to coordinate the efforts of over 40 artists, guides and photographers, who in groups of two or three each explored one of 15 locations throughout the Shuswap. From climbing up to the Enderby Cliffs, to visiting a section of the Canoe trails, to strolling up to the iconic Margaret Falls; all of the places visited were filled with the unmistakable beauty that the Shuswap has to offer. 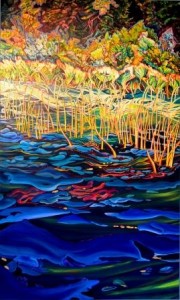 I was fortunate to participate in the project as both a guide and a photographer. Well-known Shuswap artist Lisa Figueroa wanted to visit Hunakwa Lake, but I convinced her to go to Humamilt Lake as it has public access and in my opinion, is the best paddling lake in the Shuswap because of its diverse shoreline, its many wetlands, its massive old growth Douglas fir trees, and its beaver dams and lodges. One of the highlights is paddling into the rocky narrows from the west, where the rock bluff juts out above the water looking somewhat like the head of a whitefish, which is what Humamilt means in the Secwepemc language. 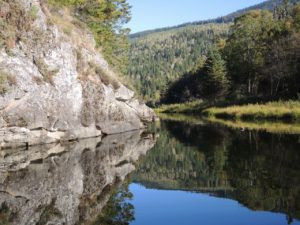 East of Malakwa just above the bridge over the Perry River is North Fork Wild, one of the Shuswap’s newest and largest regional parks on land donated by Peter Jennings, who recently passed away. 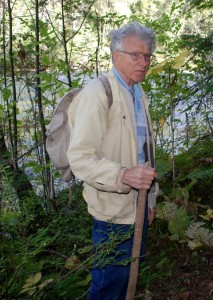 Jennings and a friend built the original trails that are now undergoing renovation by a Trail Alliance crew and should be fully open later this fall. After their tour guided by Jeremy Ayotte, artist Sara Wiens and photographer Sky Stevens produced some stunning works that provide a sense of what can be seen in this rainforest environment.

Secwepemc elder and storyteller Louis Thomas guided renowned artist Linda Franklin and experienced outdoor photographer Jim Hoskins up to the top of Klas7ant, also known as Mount Ida that towers above the city of Salmon Arm. The results include an intriguing and colourful painting that captures the beauty of an early winter scene when the larch trees shine with golden needles along with some fascinating photos.

In addition to the images, gallery visitors can listen to a recording of Louis telling the story of the Little People who encouraged his people to respect nature by fasting and using a sweat lodge to end their famine. 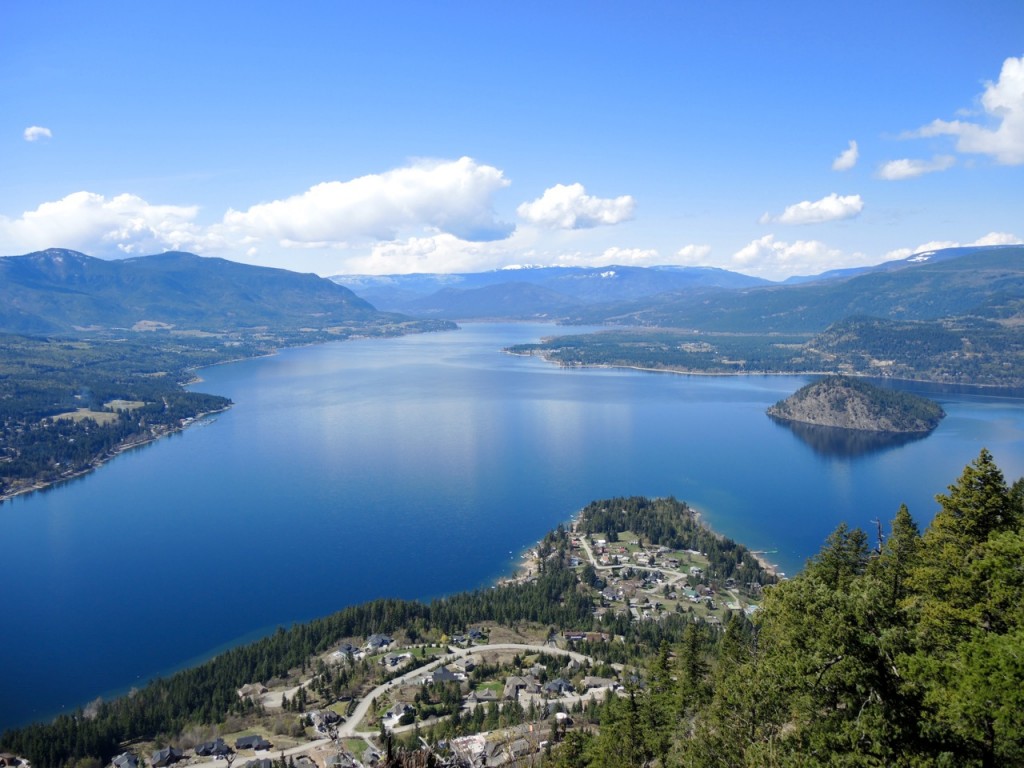 The view from the Blind Bay Bluffs, photo by Jim Cooperman

The climb up is steep, but the spectacular, panoramic view of Shuswap Lake and the Carlin Valley from the top is well worth the effort. Artist Bonnie Baker and photographer Pat Hutchins joined their guide Jan Papple last March and the results are impressive. The Blind Bay Bluffs Lookout above McArthur Heights is one of our favourite Shuswap hikes, because from the viewpoint you can see both Salmon Arm and Chase, along with a perfect view of Blind Bay. It was Bonnie’s late husband, Ted Bacigalupo, who was in part responsible for creating this park and many others, where he would hike regularly to relax after his intensive local government work.

There is much more to the hiking trails up Scatchard Mountain above the town of Chase than just the beautiful scenery, as one trail was part of the first road in the area. Artist Wendy Hunter and photographer Martin Kyllo visited the area twice with local guide and Chase councilor David Lepsoe and the works they created are inspirational. If you plan to hike this trail, make sure you pick up David’s historical guidebook and also keep your eyes open for the bighorn sheep that often graze nearby.

Along with the work at the art gallery, there are metal sculpture installations at two trails, one by Eric Kutschker at Mt. Baldy near Sorrento. The other one, by Karen Raven on the Raven Trail at Salmon Arm Nature Bay was stolen prior to the exhibition. Trail Mix exhibits are also at Prisa Lighting, the Prestige Inn, and the Blue Canoe Bakery. Other trails covered by the exhibition include Kingfisher, Scotch Creek Hlina Lookout, Cougar Bluffs, and the Owlhead. In addition to the artwork, a small book, Trail Mix, was created, which can be purchased at the Gallery.