What makes the Shuswap unique?

Home » What makes the Shuswap unique?

What makes the Shuswap unique? 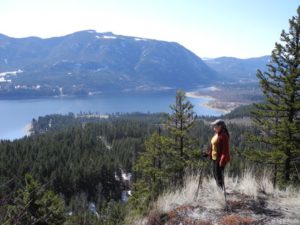 One of the enjoyable parts of spending time at a backcountry lodge is chatting with the other skiers from around the country and the world. Last week, a businessman from Vancouver asked me about Salmon Arm, because some of his friends are thinking of retiring here soon. I asked him what are the reasons his friends have for planning to move here. There was of course the obvious; our huge clean, warm lake and the other two are the great music scene and the bike trails. Contrary to what some locals believe, shopping opportunities are clearly not part of their decision-making!

Just what makes our Shuswap region so unique and special? Certainly the size, shape, location and water quality of Shuswap Lake is one attribute that cannot be found in many other parts of North America or even the world.  The diversity of the lake itself, with so much of its shoreline in a natural, uninhabited state is a rarity. And a sizeable part of the lake in Anstey Arm is permanently protected as a Provincial Park that also includes Hunakwa Lake, which is quite likely the largest, unroaded, protected wilderness lake in the interior of North America at a low elevation.

Another aspect of the Shuswap that makes the region quite unique is its diversity. There are not many other areas in the province that contain so many different ecosystems. From the dry, ponderosa pine and bunchgrass landscapes close to Falkland and Chase, to the interior rainforests of the upper Adams and Seymour, to the rich Shuswap River and Salmon River valley farmlands, the Shuswap has it all. And in some locations this diversity can be a mere hundreds of metres apart, from a dry pine treed hillside to a creek canyon where there are cedar and hemlock trees.

Another quality that sets the Shuswap apart is its First Nation heritage, as so many place names originate from the Secwepemc peoples. As well, the local First Nation bands, despite having endured over 150 years of injustice, are thriving. Their cultural heritage and language are being revived and their economies are improving, unlike many other areas of North America where First Nation communities have either disappeared or are struggling.

As the soon to be retiring Vancouver boomers know, the Shuswap has a plethora of uniquely diverse recreational opportunities. While the focus up until the last decade has been on the motorized sector from houseboats, to speedboats, jet skis, snowmobiles and motorbikes; the more environmentally friendly options are gaining traction. Thanks to the rapidly growing legion of trail enthusiasts led by the Shuswap Trail Alliance, the network of bike, and hiking trails is improving yearly.

One of the Shuswap’s most enduring unique qualities is our culture as despite our relatively small population, we are home to one of the premier musical events in Canada, the Roots and Blues Festival. Throughout the rest of the year, there are a growing number of coffee houses in surrounding communities where highly talented local musicians play to full audiences. And there are the Salmon Arm Art Gallery (SAGA) Jazz nights, the summer music nights at the Wharf and the very popular, annual student music festivals. In addition to all the fabulous music, we have wonderful live theatre and so many creative artists that are able to show their work in a splendid heritage building thanks to so much community support.

It is the amazing level of community spirit that also makes the Shuswap so special, from our very active community halls, to the large numbers of volunteers for the festivals, to the Shuswap Foundation that helps support a wide variety of local, non-profit organizations. Perhaps one of the Shuswap’s most unique cultural features is the Salmar Community Association, which is one of only a few in Canada, is likely the oldest and is the only one with two facilities and five movie screens.  And since the Association was established over 70 years ago, it has raised hundreds of thousands of dollars for community projects and scholarships.

Given all the Shuswap has to offer from its magnificent vistas to its thriving culture, it is no wonder that so many boomers want to retire here!

The Shuswap has so many more attributes than could fit into the newspaper column above. Certainly one feature that sets it apart from the Okanagan is its relatively small population, which means few crowds, no traffic jams and a better chance of enjoying more peace and solitude in nature. What sets us apart from the Kootenays is that there is more sunshine, warmer lakes to swim in, better opportunities for gardening and we are closer to larger centres, although there are more parks and more opportunities for skiing in the Kootenays.

Another attribute, not normally considered, is the amount of backcountry we have. If you study a map of the Shuswap, you can see how there are so few highways and communities, while most of the landbase is Crown land. Certainly there are logging roads throughout much of the landbase and associated cutblocks and plantations, but there are virtually no people. There are still many areas left that have yet to see a human footprint, such as many creek canyons and in many of the mountains.

As for recreation, the Larch Hills certainly deserve mention, as this is one of the largest, best maintained Nordic ski areas in the province. Plus, it is one of the few areas where a person can ski without having to purchase a day pass, as only a donation is requested. Recently, a network of snowshoe trails have been added that provide more opportunities for those who do not ski. And this area is becoming increasing popular for mountain biking and hiking in the summer.

As for culture, the Shuswap is fortunate to have a very active film society that is one of the oldest and most successful in Canada. There are weekly shows except in the summer, that include both foreign and Canadian art films. Plus there are two film festivals a year that draw large crowds.

While most of the wildlife found in the Shuswap can be found elsewhere, we are fortunate to have one of the world’s few breeding sites for the Western Grebe in Salmon Arm Bay. A portion of this bay has been protected and there is a very active group, the Salmon Arm Bay Nature Enhancement Society  that provides interpretive services and looks after the popular lakeside trails. this area has become a mecca for birdwatchers, a pastime growing in popularity especially for the boomer generation.

And while there is no shortage of wineries in the Okanagan, there are a growing number now in the Shuswap. What makes these wineries unique is that the grapes are being grown farther north than anywhere else in North America. The Granite Creek winery did hold the distinction of being the northern, but now the Celista Estate winery in the North Shuswap holds this distinction. Visit www.shuswapwineries.ca to learn more about grape growing and wine in the Shuswap.